from Wikipedia, the free encyclopedia
This is the spotted version , flagged on August 23, 2020 . There is 1 pending change that has yet to be viewed.

The title of this article is ambiguous. Further meanings are listed under Jack Black (disambiguation) .

Thomas Jacob Black was born in 1969 in Santa Monica as the son of the two engineers Judith Love Cohen , who was then working on the famous Hubble space telescope , and Thomas William Black. His mother was of Jewish origin and his originally Christian father later converted to the Jewish faith as well . Black was raised accordingly in the Jewish faith and celebrated a bar mitzvah in his youth .

Black's parents divorced when their son was ten years old. Black lived mainly with his father in Culver City from then on , but also visited his mother regularly. His parents made it possible for him to attend a private school . First, Black began studying at UCLA , which he later abandoned in favor of his career in show business.

At the age of thirteen, Black was in a television commercial for the video game Pitfall! been seen. In 1992 he followed his classmate Tim Robbins from UCLA to appear together as an actor in the film Bob Roberts . He then continued his career primarily as a television actor and appeared in various television series such as Alles Okay, Corky? , Alaska , of all places , Mr. Show with Bob and David and Picket Fences - Tatort garden fence on. As a film actor, he mostly played supporting roles in the 1990s. He has appeared in films such as Demolition Man (1993), Waterworld (1995), Mars Attacks! (1996) and The Public Enemy No. 1 (1998).

Around the turn of the millennium, Black gradually made the leap from supporting to leading actor and was able to get bigger roles in other film projects: with the role of Barry in the comedy film High Fidelity , in which he acted alongside John Cusack , he made his breakthrough in 2000. Leading roles in other films (mostly comedies again) followed. Black was seen in the films Hard in Love (2001), Nix wie aus aus aus Orange County (2002), School of Rock (2003) and Envy .

Another highlight of Black's film career was the 2005 film King Kong , in which he played the unscrupulous filmmaker Carl Denham . Other films followed, most of which were comedies again: Black starred in films such as Nacho Libre and Love Doesn't Need Holidays (both 2006), Year One - All Beginnings Are Hard (2009) and Gulliver's Travels - Something Comes Soon Great things to come (2010); again mostly in the lead role.

In addition, Black has always been known over the years as an active voice actor for cartoon characters from various animated films and video games: for example, he loaned the children's films Ice Age (2001), Kung Fu Panda (2008), Kung Fu Panda 2 (2011), The Muppets ( 2011) and Kung Fu Panda 3 (2016) different characters his voice. For the video game Brütal Legend (2009) from the development studio Double Fine Productions , Black provided both facial features and voice to the protagonist. In the video game Broken Age (2014) by Tim Schafer , he gave the voice to the character Harm'ny Lightbeard .

Jack Black is counted to the group of actors Frat Pack , so that he often appears together with the other actors in this group.

Black, also known as a musician by the acronym "JB", is the lead singer of the two-man rock band Tenacious D , which he founded in 1994 with his colleague Kyle Gass . Together, the duo have released four different albums in the past: Tenacious D (2001), The Pick of Destiny (2006), Rize of the Fenix (2012) and Post-Apocalypto (2018). Several songs from these albums were also used for various video games.

Directed by Liam Lynch , the musical comedy Kings of Rock - Tenacious D was created in 2006 (based on the band of the same name by Black and Gass) , in which both band members played the leading role. Other known Frat Pack actor like Ben Stiller and Tim Robbins had cameo -Auftritte in the film. The reviews were mixed. Primarily, the film has been criticized for its sexual innuendo and depiction of substance abuse .

Black had further collaboration in 2000 with the punk rock band The Vandals , for whose song Fourteen he sang the background vocals. On the 2004 CD Probot , a metal project published by Foo Fighters founder Dave Grohl , Jack Black sang the bonus track I am the Warlock . He also had other collaborations with Eagles of Death Metal (2006) and The Lonely Island (2009). Black also produced a cover of Marvin Gaye 's classic song Let's Get It On .

Since December 21, 2018, Jack Black has been running its own YouTube channel called Jablinski Games, which mainly deals with gaming and pop culture .

Jack Black has been married to Tanya Haden , a cellist and daughter of jazz great Charlie Haden , since March 14, 2006 . The two have known each other since attending the private Crossroads High School together. Their relationship resulted in two sons (born in 2006 and 2008). 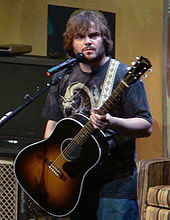