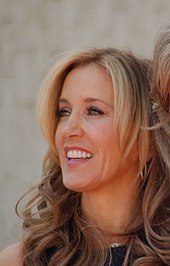 After attending high school, Huffman studied theater studies , where she graduated in 1988 with a Bachelor of Arts . In the same year she made her first film appearance in Things Change - More Luck than Mind . In the following years she was seen in several films. On television, Huffman has appeared on various television series , including the X-Files, The FBI's Scary Cases , Law & Order, and Frasier . For her role in Sports Night , Huffman was nominated for a Golden Globe Award . From 2004 to 2012 she appeared in the hit television series Desperate Housewives , in which she mimed the stressed housewife Lynette Scavo . In addition to her appearances in films and series, she is also active as an actress on Broadway .

In 2005, Huffman played the conservative transsexual Bree in Duncan Tucker's road movie Transamerica , who is about to undergo sex reassignment surgery. For this achievement she was honored with the Actor Award of the National Board of Review , the Golden Globe and an Oscar nomination in 2006.

As a voice actress , she was in two episodes of Kim Possible as Dr. Director to hear.

On March 7, 2012, Huffman was honored with a television category star on the Hollywood Walk of Fame (at 7060 Hollywood Boulevard ); her husband William Macy received a star at the same time in the same place.

In March 2019, as part of the US university scandal , the Boston prosecutor accused her of paying a $ 15,000 bribe to improve her eldest daughter's SAT score for admission to an elite university. She was then arrested and released on bail of $ 250,000. In April 2019, Huffman admitted paying the sum to an "admissions advisor" who bribed the private school where the entrance exam was held to have a Harvard graduate correct her daughter's answers . Huffman was sentenced to 14 days in prison, 250 hours of community service, and a fine of $ 30,000 in mid-September 2019. She started her sentence on October 15, 2019 and was released after ten days.

Years before the bribery scandal, Huffmann also bribed a school employee in her role as Lynette Scavo in the series Desperate Housewives to enable her child to be accepted. Even then, the total was $ 15,000.