The German Youth Protection Act ( JuSchG ) is a federal law for the protection of children and young people ( minors ) in public and in the media .

In the Federal Republic of Germany, the law for the protection of young people in public (JÖSchG) ( Federal Law Gazette I p. 936) was passed on December 4, 1951 , and came into force on January 6, 1952. The JÖSchG has been amended and revised several times. It was merged in 2003 together with the law on the dissemination of writings and media content harmful to minors (GjSM) in the new Federal Youth Protection Act (JuSchG), which came into force at the same time as the State Treaty on Youth Media Protection (Section 30 JuSchG).

One of the forerunners of the JÖSchG was the Film Act of 1920, which was repealed after the Second World War, and which only permitted the public showing of films after they had been checked by central inspection bodies. The police ordinance for the protection of young people of June 10, 1943 ( RGBl. I p. 349), which was controversial because of the threats of punishment against young people and which, among other things, contained exit restrictions, was only repealed by the JÖSchG and was partially incorporated into the newly formulated regulations. 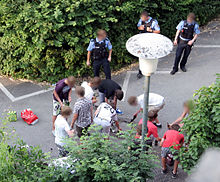 A police operation within the framework of the Youth Protection Act: Young people have to dispose of alcoholic beverages in the sewer system.

The JuSchG regulates, among other things, with regard to minors:

The Youth Protection Act was revised with effect from April 1, 2003 (the new version was passed in July 2002, three months after the rampage in Erfurt ), at the same time the State Treaty on Youth Media Protection (JMStV) came into force. While the JuSchG substantially to the protection of minors in public and distribution restrictions on youth-endangering carrier media (print media, videos, CD-ROMs, DVDs and so on) specifies the provisions to be radio and called in JMStV Telemedia treated. The reason for this dichotomy is the different legislative powers of the federal states and the federal government. With the new youth protection law, scattered regulations, such as youth protection provisions in the Rundfunkstaatsvertrag (RStV) and the Media Services State Treaty (MDStV) , have been bundled. In particular, the content of the law on the dissemination of writings and media content harmful to minors (GjSM) , last published on July 12, 1985 ( Federal Law Gazette I p. 1502 ), was incorporated into the Youth Protection Act.

An innovation is that in both laws certain content was named that may not be distributed even without indexing or age restriction (however, to a different extent for telemedia than for carrier media, and the consequences of violations are different). This content is “carrier media that glorifies the war” ( Section 15 (2) No. 2 JuSchG), media that “depicts children and young people in unnaturally gendered postures” (Section 15 (2) No. 4 JuSchG) and media content that “people, those who die or are or were exposed to severe mental suffering, portray them in a manner that violates human dignity and reproduce an actual event without an overriding legitimate interest in this form of reporting "(Section 15 (2) No. 3 JuSchG and Section 4 para. 1 sentence 1 No. 8 JMStV).

In addition, the law was changed with regard to computer and video games, among other things. Games must now be submitted to the USK if they are to be sold to minors . In a test procedure, this determines an age limit for games, which must then be clearly marked on the product and which is binding (similar to the way in which films were marked by the FSK for years ). Before the amendment to the law, the USK markings were voluntary and purely informative. All USK markings (including those before April 1, 2003) are now binding.

Games marked by the USK can no longer be indexed by the BPjM - the existing indexes, however, still apply. This caused a sensation because shortly before the new JuSchG came into force, the BPjM indexed the games Unreal Tournament 2003 and Command & Conquer: Generals , even though these were given the voluntary age specification “16+” from the USK. In order to circumvent the indexing, the game manufacturers published German versions of the games according to the amendment to the law, which were then rated by the USK as "16+" and were not allowed to be indexed.

In this context, the ban on the installation of screen entertainment devices without the possibility of winning (so-called arcade machines ) was relaxed to the effect that devices classified by the USK as “6+” may be installed again in publicly accessible traffic areas.

Another innovation is that films that have been approved by the FSK from the age of 12 can now also be viewed in the cinema by children from the age of 6, provided they are accompanied by a parent or guardian .

With the criminal provision of § 27 JuSchG, which makes the passing on of media harmful to minors or offering them a criminal offense, the Youth Protection Act is part of secondary criminal law .

Article 3 of the law on protection against the dangers of passive smoking of July 20, 2007 ( Federal Law Gazette I p. 1595 ) revised Section 28 (1) No. 12 JuSchG and Section 10 (1) JuSchG. The sale of tobacco products to young people and their consumption in public were generally prohibited. The previous age limit of 16 years no longer applies.

As of January 1, 2009, Section 10 (2) JuSchG, which regulates the requirements for vending machines for tobacco products , was changed (see Article 7 (3) of the Amendment Act). The deadline for converting such machines ended on January 1, 2009.

After a lengthy debate, with effect from July 1, 2008, the labeling of carrier media was further tightened and a so-called ban on killer games was introduced. Media that contain “particularly realistic, cruel and sensational depictions of self-directed violence that dominate the scene” (Section 15, Paragraph 2, No. 3a) are automatically considered to be “seriously harmful to young people” according to the new legal situation (ie even without action by the BPjM) ", With the result that, among other things, they may not be offered at generally accessible sales points or by mail order and may not be advertised publicly.

In addition, the BPjM was authorized to include media (with the same legal consequences mentioned) in the list of media harmful to minors that ( Section 18 (1) No. 1)

The following change came into force on January 1, 2009:

(1) Tobacco products may not be given to children or young people in restaurants, sales outlets or otherwise in public, nor may they be allowed to smoke.

(2) Tobacco products may not be offered in vending machines in public. This does not apply if a machine

By the "Law for the Protection of Children and Young People from the Dangers of Consuming Electronic Cigarettes and Electronic Shishas" of March 3, 2016, the word "tobacco products" was supplemented by "and other nicotine-containing products and their containers" in Section 10, as well as by the new paragraphs 3 and 4 extended:

Section 28 Paragraph 1 Numbers 12 and 13 has been reworded as follows:

The following important information is missing from this article or section: Help Wikipedia by researching and pasting it .

Protection of minors in public

Children and young people under the age of 16 may only be allowed to stay in restaurants if they are accompanied by a person with custody or a representative or if they have a meal or a drink between 5 a.m. and 11 p.m. Adolescents from the age of 16 are not allowed to stay in restaurants without the company of a person with custody or a parenting officer between midnight and 5 a.m. There are no restrictions when children and young people take part in an event organized by a recognized youth welfare organization or are traveling.

Children and adolescents under 16 years of age and adolescents from 16 years of age may not be allowed to attend public dance events without the accompaniment of a person with custody or legal guardian until midnight. An exception rule only applies if it has been approved by the competent authority ( Section 5 (3)). In the case of a dance event initiated by recognized youth welfare organizations, young people under the age of 16 are permitted to stay there until midnight.

Arcades and games of chance

Children and adolescents are generally not allowed to stay or participate in games of chance. However, children and young people may take part in games with the chance to win at folk festivals, rifle festivals, fairs, special markets or similar events if the winnings are of little value ( Section 6 ).

Places, events and businesses that are harmful to young people

Children and young people may not be allowed to stay at events and companies that are harmful to young people. Depending on the type of physical, mental or emotional well-being endangered, the competent authority may allow exceptions under certain conditions (such as age limits and time restrictions, etc.) ( Section 7 ).

Children and adolescents are generally not allowed to stay in places that are harmful to minors. The police and other competent authorities have the option to immediately prevent the child and youth from being endangered, to encourage the minor to leave the place, to bring them to the legal guardian or, if no legal guardian can be reached, to bring them into the care of the youth welfare office ( Section 8 ) .

As a matter of principle, children and young people may not be given any beverages containing spirits or foods that contain not just a small amount of spirits, nor may their consumption by minors be permitted ( Section 9 (1), first sentence). "Other alcoholic beverages" may not be given to children and young people under the age of 16, nor may their consumption by those under the age of 16. However, the legislature provides for an exception: Young people (who are considered minors from 14 years of age in the sense of Section 1, Paragraph 1) may be permitted to consume alcoholic beverages not containing spirits in the presence of the person with custody.

Furthermore, alcoholic beverages may not be offered in vending machines. This does not apply if the machine is set up in a place inaccessible to children and young people or if it is set up in a commercially used room and it is ensured through technical devices or constant supervision that children and young people cannot dispense alcoholic beverages.

Protection of minors in the media sector

The following rules apply in cinemas and other public film events:

Here, too, an accompanying person with custody or parenting officer lifts the restrictions. Regardless of this, however, the age ratings of the films still apply as a criterion. This does not apply to films with FSK 12. These films can be viewed by 6 to 12 year old children accompanied by a person with custody.

Image carriers with films or games

Prerecorded video cassettes and other data carriers (image carriers) that are suitable for distribution and that are programmed for playback on or playing on screen devices with films or games may only be made available to a child or adolescent person if the programs are approved by the highest state authority or a Organization of the voluntary self-regulation within the framework of the procedure according to § 14 Paragraph 6 have been approved and marked for their age group or if it concerns information, instruction and teaching programs which are marked by the provider with "info program" or "teaching program".

Vending machines for the delivery of recorded image carriers may only be set up on public traffic areas accessible to children or young people, outside of commercially or otherwise professionally or commercially used rooms or in their unsupervised entrances, vestibules or corridors, if exclusively in accordance with § 14 Paragraph 2 No. 1 up to 4 (up to the approval "Approved from sixteen years") labeled image carriers are offered and technical precautions ensure that they are not approved by children and young people for whose age group their programs are not approved according to § 14 Paragraph 2 No. 1 to 4 , cannot be operated.

What the Youth Protection Act does not regulate