This article is about the alcoholic drink called tequila. For other meanings, see Tequila (disambiguation) . 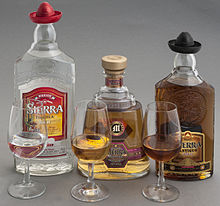 Tequila [ teˈkila ] is a form of the spirit mezcal , an agave brandy from Mexico . Tequila is the best-known mezcal and is extracted from the heart of the blue agave ( Agave tequilana Weber, azul, Agavaceae ) in the vicinity of the city of Tequila in the Mexican state of Jalisco and in four other states . This heart was called "The House of the Moon" by the locals, which means "Mezcal" in the Nahuatl indigenous language . Usually the alcohol content is between 38 and 40, with some tequilas up to 50 percent alcohol by volume .

Oak barrels in which tequila reposado or añejo matures

Additionally, tequila is classified into five groups based on its maturation. English names are used for exports, and Spanish names within Mexico:

The origin of the agaves for tequila production is differentiated according to their growing areas in highlands (highlands) and flatlands (lowlands).

The agave cultivation, fermentation and distillation have a great influence on the quality of the tequila. The final taste is also strongly influenced by the maturation. 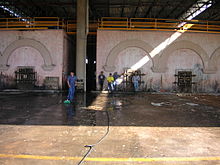 Traditional ovens in a tequila distillery

The raw material for tequila may only be made from Weber blue agave . On average, it takes eight to nine years before an agave can be harvested. The inside of the agave, also known as the heart or piña, is steamed in ovens between 60 and 85 ° C for 24 to 36 hours.

Most of the larger manufacturers, however, use autoclaves in which the agaves are kept for between 8 and 14 hours under pressure and with hot steam. This converts the sugar into simple sugars . After cooking, the agaves cool (traditionally between 36 and 48 hours) and are then crushed. Irradiated with water, the sap and sugar are released from the plants, which are then pressed out. Before the agave syrup or must , if any agave parts remain, is processed, a decision is made whether a 100 percent tequila should be made. In this case, the syrup or must is placed in large tanks without any additives. Otherwise a minimum of 51% agave sugar must remain, which can be mixed with a maximum of 49% other sugar (mixto tequila). With the addition of yeast, the mass ferments for up to 12 days, depending on the season and temperature, but often only for 24 hours using modern chemistry. The sugar is converted to alcohol, around 5% - 7%, and the yeast dies. This is followed by a double distillation , and rarely a third, either in traditional copper vessels or modern steel tanks. The distillation takes between four and eight hours. The result is a completely clear tequila. By the way, no yeasts are used for “real” tequila, but a bacterium ( Zymomonas mobilis ). “Real” tequila is therefore a specialty.

The 100 percent tequila must be bottled in Mexico. In addition, it gets the name "Hecho en México" (made in Mexico). Other tequila may be placed in tanks and also filled elsewhere.

The production of tequila is subject to strict legal requirements, which are monitored by the Mexican supervisory authority Consejo Regulador del Tequila , CRT for short. To confirm their authenticity, the production facilities are provided by the CRT with so-called NOM and DOT identification numbers, which are shown on the bottle label.

The name of the drink is derived from the city of Tequila near the Pacific coast. Spaniards were likely the first to make tequila during the 16th century. The blue agave grew lush here and was omnipresent in life. This plant was used for making ropes, as needles, as a medicine and more. Since the drink pulque was made from agave and many locals also chewed the sweet heart of the blue agave, it is reasonable to assume that the Spaniards began to produce a distillate . This development was not welcomed by the Spanish colonial government and production was banned. But tequila production grew in the forbidden until production was allowed again in the 17th century with the introduction of a tax. Tequila spread in this way in the region that today forms the state of Jalisco. With Mexican independence in 1821, it became more difficult to get alcohol from Spain. The local manufacturers took this opportunity to expand their tequila production and sold tequila as far as Mexico City. While tequila producers became more and more powerful and also exerted political influence, tequila became the national drink in 1911 after the end of the dictatorship of General Porfirio Diaz . While Mexican films continued to fuel tequila growth in the 1930s and 1940s, tequila expanded to North America during World War II. The margarita is said to have played a key role in this. Eventually it spread to Europe and South America and around the world.

There are around 130 manufacturers in Mexico with over 900 tequila brands (as of 2008). Around 80% of the tequila comes from the Mexican state of Jalisco . The blue agave now dominates large parts of this region. In addition, tequila is allowed to come from different municipalities in the states of Nayarit (8 municipalities), Michoacán (30 municipalities), Guanajuato (7 municipalities) and Tamaulipas (11 municipalities). In 2005, 40% of production was sold in the domestic market, 46% was exported to the US and 14% to the rest of the world. About 300,000 people are directly and indirectly employed in tequila production. The Regulatory Council of Tequila (CRT) expects a production of 300 million liters in 2018, the second highest amount after 2008, when 312 million liters were distilled. 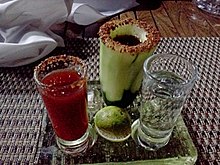 Good 100% agave tequila should be enjoyed pure. Reposado is served in a sherry glass, añejo also in a cognac glass. The round taste of a good old tequila unfolds at room temperature; neither should it be adulterated by salt or lime.

Ordinary young tequila is often enjoyed with salt and lemon / lime , especially outside of Mexico , although a strict ritual is not common, but salt and lemon / lime are used according to personal taste. The best-known, however, is the order in which you first lick some salt from your hand, then tip the tequila and then bite into the lemon wedge. In Mexico, on the other hand, white tequila is often consumed as a long drink mixed with a grapefruit soft drink.

In restaurants, (young) tequila is also served with a glass of Sangrita and a glass of lime juice , i.e. three glasses. The sequence is then lime juice, tequila and finally Sangrita - the whole "Bandera" (flag) is called because it corresponds to the colors of the Mexican flag (green, white, red). All of the above combinations are essentially used to neutralize the tequila taste.

Drinking the young golden tequila with an orange slice and a pinch of cinnamon is a German specialty and just as unusual in Mexico as the "Swedish" variant. For this, a coffee bean is placed in the white tequila and a half orange slice sprinkled with cinnamon is served. First, the cinnamon orange is drunk with the first half of the tequila. Then the rest of the tequila along with the coffee bean that is bitten during the drinking process. This type of drink can also be found in Germany alongside the widespread salt-tequila-lemon ritual. It should be added that drinking tequila with an orange slice is also known in Mexico, but there it is drunk with Reposado Mixto.

Tequila is also drunk in cocktails all over the world . Mixtos are often used for this, but high-quality cocktails with 100% agave tequila are also enjoying increasing popularity.