The Mezcal , Mescal or Meskal (of Nahuatl Nahuatl mexcalli , shot ' ) is a Mexican spirit with typically 40  vol .-% alcohol . Mezcal is made from the pulp of different types of agave ( Mexican Spanish magueyes or mezcales ). Taste and appearance vary depending on the type of agave, the region as well as the preparation and the length of storage.

The best-known mezcal is tequila , which is distilled exclusively from blue agave in the vicinity of the city of Tequila in the Mexican state of Jalisco . Mezcal is mainly produced in the region around the city of Oaxaca . The states of Guerrero , Durango , San Luis Potosí and Zacatecas are also officially allowed to produce it.

Mezcal is made from the heart of the agave, before the agave has flowered for the first and last time, after about 6 to 10 years of life. The leaves are chopped off, only the pineapple-shaped core of the plant (hence its Spanish name piña , pineapple, “ pine cone”) is harvested, boiled and then pounded into a pulp.

The cooking process traditionally takes place in so-called palenques , large pits in the ground. These pits are lined with hot stones, the agave hearts are placed on top and these are covered with palm mats ( petate ) and earth. They stay in this pit for three to five days so that they can absorb the aroma of the soil and smoke. Then the agave hearts rest for about a week and are then crushed with a millstone . Modern producers cook the agave in steel ovens and then mechanically chop them up.

The resulting pulp is mixed with yeast and, if it is not a mezcal made from 100% agave, also with sugar and then fermented for several days in large stainless steel vats. According to legal requirements, the proportion of agave must be at least 51%. After fermentation , the pulp is distilled twice. After the first distillation , the alcohol yield is usually still very low. After this distillation, the fibers are removed from the pulp and the alcohol is added back to the first distillation. The mixture is distilled a second time. If the alcohol content is over 80%, the alcohol is diluted with water. This schnapps is bottled or stored for aging.

Mezcal ages relatively quickly compared to other spirits . It is stored in large wooden barrels for two months to seven years and in this way, in addition to the aroma due to the wood, also has a golden yellow color. The darker the mezcal, the longer it has been stored and the more distinctive the aroma (exception: abocado). There are three age groups:

In Abocado is not or only briefly matured Mezcal, which was subsequently treated with dyes or flavorings. However, products that have been stored for longer can also be traded as abocados.

Often the distillate is not bottled at the place of manufacture, but first transported to the bottling location in large tanks and only there, diluted with water, brought to drinking strength and bottled. Mezcal bottled at the place of manufacture may have the addition Envasado de Orígen on the label , in other places but mezcal bottled in Mexico the addition Envasado de México .

In contrast to many other spirits such as whiskey , rum , brandy and even compared to tequila , which is a special form of mezcal, lovers of mezcal often prefer unstored qualities over the matured and milder varieties due to the barrel storage. Accordingly, freshly roasted mezcal often has a rough and often smoky agave taste.

At least 51% of the mezcal must be made from the juice of around 100 types of agave approved for production (out of more than 400 in total), the remaining alcohol can be obtained from added sugar. The end product must have an alcohol content of at least 36  percent by volume . But there are also mezcals that are made from 100% agave. Details are regulated by the Mexican authority Consejo Mexicano Regulador de la Calidad del Mezcal .

In the EU Spirits Ordinance , mezcal has not yet been defined as a separate category of spirits (cf. Appendix II, No. 1–46), so that the general sales name for mezcal in the European Union is simply "spirit". According to Chapter 1, Article 5, Paragraph 3 of the Ordinance, neither the starting materials are specified, nor are subsequent flavoring, coloring or sugaring prohibited.

The "worm" in the mezcal 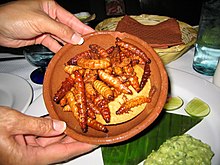 A bottle of mezcal with caterpillar (on the bottom)

It is a marketing gag that was introduced in 1950 by Jacobo Lozano Páez. He found that mezcal made from caterpillar-infested agave leaves had a slightly different taste than that of unaffected ones. Hence the idea of ​​introducing a caterpillar (Gusano del Maguey) into the bottle for marketing reasons, and it was quite a success. This caterpillar is included in the brands “Gusano de Oro”, “Gusano Rojo”, “Dos Gusanos” or “Oro de Oaxaca”. Based on the Mexican standard NOM-006-SCFI-2012 , the use of foreign substances is explicitly not permitted in tequila, while the Mexican standard NOM-070-SCFI-1994 under point 6.1.2 implicitly allows it in mezcal.

In Mexico, a lime piece sprinkled with a reddish spice is usually served with the mezcal. The spice is either chilli salt (salt with chilli and lime powder) or chilli salt with powder of the dried and mashed caterpillar ( Sal de Gusano ).