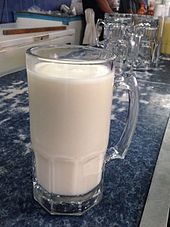 The pulque is considered the Mexican national drink . It is an alcoholic fermented drink made from the fermented juice of various agaves , especially agave salmiana .

The fermentation of pulque is not caused by yeasts - as is the case with most other fermentation drinks containing ethanol - but by the bacterium Zymomonas mobilis . Pulque is milky and contains around 2 to 6% by volume of alcohol (ethanol).

The agave and the drink play a major role in mythology and religious rituals of the Indian population of Mexico. The origin of pulque is unknown. The rituals associated with it , however, appear in rock drawings, which were made around the year 200. According to an Indian story, a Toltec nobleman named Papantzin found out how to get the juice (aguamiel) from the agave and how to make pulque during the reign of Tecpancaltzin . The Aztecs also used it as a drink in religious ceremonies. There are numerous cups or goblets from pre-Columbian times in the shape of a monkey, which were probably intended for the consumption of pulque; the monkey symbolizes the intoxicated state of the drinker.

The Aztecs called the drink ixtac octli (white liqueur). The name “pulque” is erroneously derived from octli poliuhqui (spoiled liqueur). This term was used for an over-aged pulque.

Pulque is still produced and drunk in some parts of Mexico, but only in limited quantities and mainly in the countryside. The main cultivation is on the plateau of the state of Hidalgo .

Pulque spoils quickly and cannot be stored or transported, so the drink is hardly available outside of Mexico.

Three quarters of the total production of pulque is obtained from the juice of the agave salmiana through fermentation, the rest mainly from the agave americana in the southern areas of the state of Oaxaca . In addition, Aguamiel is also harvested from Agave mapisaga and Agave marmorata , especially in central Mexico.

In the first half of the 20th century, there were two legendary Mexican soccer goalkeepers who were associated with pulque: Cirilo Roa was known for regularly walking the field with a pitcher of pulque, which he drank while playing. Ángel Antonio León was commonly known by the nickname Pulques León because his family made a living selling the drink.