Rage Against the Machine

This article covers the band. For her debut album see Rage Against the Machine (album) .

Rage Against the Machine ( RATM for short ) is a band from Los Angeles .

It was founded in 1991 by Zack de la Rocha (vocals), Tom Morello (guitar), Tim Commerford (bass) and Brad Wilk (drums). The lyrics of the front man de La Rocha deal with political, social and personal problems, which the band expresses in a crossover mix of metal , hip-hop , punk , funk and alternative rock . 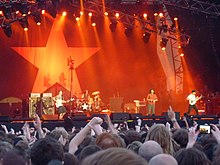 Rage Against the Machine live in 2010

Zack de la Rocha and Tim Commerford were good friends with members of a band called Revolta, while Morello lived with his mother in Illinois , where he practiced guitar in a garage band he formed with the later Tool guitarist Adam Jones . When Morello finally moved to Los Angeles, he came across De La Rocha in a bar, who was rapping with friends . The music group emerged from this encounter.

In 1992 RATM debuted on Sony Music with the self-titled first album . It is still considered a classic of the crossover genre today and made the band famous in one fell swoop. The most famous songs on the album (and single releases) include Bombtrack , Killing in the Name and Wake Up . The vocal contributions by their singer Maynard James Keenan to Know Your Enemy are further proof of the personal closeness to the band Tool . The cover shows the Vietnamese monk Thích Quảng Đức , who burned himself to death in Saigon in 1963 in protest against the government's policies.

In 1996 the follow-up album Evil Empire was released , which was a bit more hip-hop-heavy. The accompanying single Bulls on Parade contains Hadda Be Playing on the Jukebox, the live version of a poem by Allen Ginsberg .

The single People of the Sun , also released in 1996, deals with the Zapatista uprising , which is also discussed in other songs. These include War within a Breath in 1999 and Bulls on Parade . But RATM sat down not only in his songs with the EZLN apart, but also published interviews and video reports in which he on the revolt of the indigenous guerrilla - movement drew attention from southern Mexico.

In 1997 the album Live & Rare was released exclusively in Japan to promote the tour there. The tracks were taken over from old singles, but most of the songs are live. Outstanding tracks are The Hour of Chaos , with Chuck D., and Zapatas Blood .

The third Rage Against the Machine album is titled The Battle of Los Angeles and was released in 1999. The song Voice of the Voiceless is dedicated to Mumia Abu-Jamal .

In 1999, Noam Chomsky conducted an interview with the band on politics in Mexico, which was released on their DVD and VHS The Battle of Mexico City .

In 2000 the band surprised their following with the album Renegades . It did not contain any of its own songs, but rather twelve cover versions. Renegades seems to be the fourth and so far last regular album by the band through the selection of exclusively political or socially critical pieces by artists who come from both hip-hop (e.g. Afrika Bambaata : Renegades of Funk ) and rock (e.g. B. The Rolling Stones : Street Fighting Man ) come to summarize the conceptual content of the musicians.

On October 19, 2000 de la Rocha left the band. He cited the reason for this step that he no longer saw a basis and that there were big differences in the writing of the songs. He then worked for a short time together with the drummer of The Roots , Quest Love , and the former frontman of Company Flow , El-P together. He also recorded a song against the war in Iraq (March of Death) which was made available for free on the website of the same name. He then recorded the song We Want It All with Trent Reznor , which served as the soundtrack for Michael Moore's film Fahrenheit 9/11 .

The other band members Morello, Wilk, and Commerford then formed the band Audioslave with Chris Cornell , the former singer of the Seattle grunge band Soundgarden , which then released three albums.

The title Wake Up is the closing song of the first Matrix film. Also for the soundtrack of the sequel Matrix Reloaded one song of the group was selected with Calm Like a Bomb , although the band no longer existed at the time of the film's release.

In 2003 the band released their first concert album entitled Live at the Grand Olympic Auditorium , which contains excerpts from the concerts in Los Angeles on September 12 and 13, 2000. The live DVD of the same name was also released.

Concert at the Target Center in 2008, parallel to the Republican National Convention

Rage Against the Machine reunited in January 2007 to headline the Coachella Valley Music and Arts Festival in California. Then they went on tour with the Wu-Tang Clan . The band was also engaged for several European summer festivals in 2008, for example for the 39th edition of the Pinkpop Festival in Landgraaf , the Netherlands , for Rock am Ring , Rock im Park and for Nova Rock in Burgenland. In Berlin-Spandau a single concert took place on the grounds of the Spandau Citadel .

In December 2009, a grassroots campaign initiated via Facebook resulted in the title Killing in the Name rising to number 1 in the UK Singles Charts and thus becoming the band's best chart position to date. The aim of the campaign was to displace Joe McElderry , the winner of the casting show "The X Factor" at the time, from number 1 on the Christmas charts . This had been proven by winners of the show for the previous four years in a row. The entire income of the band from the resulting single sales were donated to the British homeless organization Shelter.

In 2010 the compilation The Collection was released , which includes all albums published so far. In addition, the band performed again for some headliner shows in Europe (including Rock am Ring and Rock im Park ) and gave a free concert in London as a thank you for the X-MAS No.1 promotion.

In 2011 RATM played the last concert so far. This took place under the motto "LA Rising" in Los Angeles. It was a self-hosted festival with other bands like Muse , Rise Against and Lauryn Hill .

For the 20th anniversary of the album Rage Against the Machine , the label Sony Music Entertainment re-released the album in November 2012 with unreleased bonus tracks under the name XX Anniversary Edition , both as a compilation with three or five CDs and as a vinyl record.

In October 2015 the concert from London in 2010 was released on DVD and Blu-Ray under the title Live at Finsbury Park . In addition to the appearance, this includes an interview with Jon Morter , who initiated the grassroots campaign. The concert was previously only released as a bonus DVD on the Rage Against the Machine XX Anniversary Edition .

In 2016 it was announced that the band would continue without Zack de la Rocha as he was working on a solo album. Instead, Public Enemys Chuck D and Cypress Hill rapper B-Real were introduced as the new front men. The band gave themselves the new name Prophets of Rage . At the end of July 2016 the band released the first self-titled single Prophets of Rage, a world tour is to follow. Brad Wilk did not rule out a return from de la Rocha. Bassist Tim Commerford also let it be known in an interview that Prophets of Rage and Rage Against the Machine are seen by the members as different projects despite all the similarities. Further activities by Rage Against the Machine are therefore by no means off the table. A maxi EP called The Party's Over was released in late August of the same year.

At the beginning of November 2019 it was announced that the band will perform with the reunited original line-up from March 2020. The first dates mentioned were El Paso , Texas, on March 26, 2020 and two days later Las Cruces , New Mexico. The band will headline the Coachella Valley Festival 2020. In Europe, the band was announced as headliner at the “ Lollapalozza ” festival. In view of the COVID-19 pandemic , the tour was initially canceled on March 13, 2020. Performances are planned from June 2021.

RATM was also nominated twice at the MTV Video Music Awards , in 1996 for Bulls On Parade for Best Hard Rock Video and 1997 for People of the Sun for Best Rock Video .

Following the September 11, 2001 terrorist attacks , the 2001 Clear Channel Memorandum recommended that none of the band's songs should be played on the radio in the days following the attacks (unlike other artists, most of whom only one track ended up on this list) .

Commons : Rage Against the Machine  - collection of images, videos and audio files