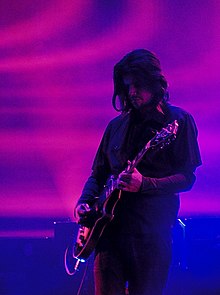 Adam Thomas Jones (born January 15, 1965 in Libertyville , Illinois ) is an American guitarist for the progressive metal band Tool . He is also responsible for the visual side tools (videos, album illustrations).

At first he played the violin , then the electric bass . During his school days he played with Tom Morello , who later became the guitarist of Rage Against the Machine and Audioslave, in a band called "Electric Sheep".

He then founded the progressive metal band Tool with his neighbor Maynard James Keenan , bassist Paul d'Amour and drummer Danny Carey . After the music video for Sober , in which only the nail box came from him, he took over the video-making completely and shot the tool videos from there, which differ from ordinary music videos through stop-motion technology, dreary colors and grotesque figures.

On stage, he impresses with his technically sophisticated guitar playing, but in contrast to the other band members, he seems almost apathetic.

Adam Jones also helped out the underground legends Melvins as a tour guitarist .

Adam Jones plays several Les Paul Custom Silverbursts for Tool and uses Diezel VH-4s as well as Marshall and Mesa / Boogie amplifiers. Most of the time he only uses the bridge pickup and the turned volume potentiometer on the neck, which turns the pickup selector switch into a kill switch . The use of the Epilady, with which he generates many tool-typical sounds (e.g. "Third Eye" 1:20), is also striking. The pickups in the guitars are probably "Seymour Duncan Jazz" or "Seymour Duncan SH-4" on the bridge.

Jones has been married for the second time since 2013 and has two sons with his wife, the artist Korin Faught.