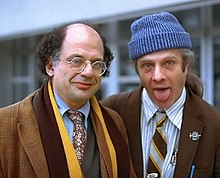 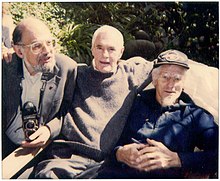 Allen Ginsberg's parents were Naomi and Louis Ginsberg. The mother was a committed communist . She became mentally ill and died early. The father, a politically active teacher, persuaded his son to study law at Columbia University . It was there that he met Jack Kerouac , William S. Burroughs , Neal Cassady and later Harold Norse , who were to influence his work. He lived in a shared apartment with Neal Cassady and Charles Plymell in the 1960s.

In December 1954, Ginsberg met Peter Orlovsky , with whom he lived in an open relationship until his death.

His poetry was shaped by classical modernism , but also by romanticism , jazz and Buddhism and its Jewish origins. The homosexuality to which he pleaded early, be politically left to anarchist commitment and Zen , yoga and mind-altering drugs impacted on his work. Ginsberg himself also named William Blake and Walt Whitman as major influences. The most important of his mentors and patrons, however, was the poet William Carlos Williams , who helped Ginsberg decisively in finding his own poetic voice. His best-known work is the long poem Howl , which established his fame and which caused a scandal in 1956, as Ginsberg's language at the time seemed obscene to many - which led to the poem being temporarily banned and the publisher and poet Lawrence Ferlinghetti arrested. The ban led to an important campaign in the struggle for artistic freedom; eventually a judge lifted the ban.

A scandal broke out during Ginsberg's visit to Prague , where he was deported from Cuba in February 1965. In May 1965, Ginsberg and his Czech friends took part in the Majáles , a traditional student May festival that was banned annually by the communist regime for political reasons. Ginsberg was elected the traditional Majáles king there. Ginsberg was immediately arrested for alcoholism, narcomania, disturbance and propagation of homosexuality and expelled from Czechoslovakia within two days.

Ginsberg was friends with the musician Bob Dylan . Both worked together on a series of settings of a selection of Ginsberg's poems and often exchanged artistic ideas. In 1977 the two of them contributed backing vocals to a piece on Leonard Cohen's album Death of a Ladies' Man .

The American avant-garde artist Bruce Conner created a portrait of Allen Ginsberg as a mixed media object in 1960 .

Allen Ginsberg can be heard as a guest vocal on the album Combat Rock by the British punk band The Clash .

Rob Epstein and Jeffrey Friedman produced Howl , an experimental documentary film from 2010. It is based on the poem Howl and the circumstances of its publication.

In 2013, another film about the life of Ginsberg and other representatives of the Beat Generation was released with Kill Your Darlings .