John Lilly is a redirect to this article. For the Chief Executive Officer of the Mozilla Foundation, see John Lilly (Computer Scientist) . 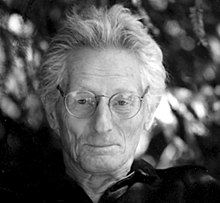 John Cunningham Lilly (born January 6, 1915 in St. Paul , Minnesota, † September 30, 2001 in Los Angeles , California) was an American biologist and neurophysiologist . Lilly was first known for the invention of the isolation tank and for his research on dolphins and their language . Later he tried - mainly in self-experiment - to explore human levels of consciousness with the help of LSD and other drugs such as ketamine . He uses the so-called human biocomputer as an explanatory model .

Lilly graduated from the California Institute of Technology with a degree in biology and received her PhD from the University of Pennsylvania in 1942 . He initiated and led research projects a . a. in the fields of biophysics and neurophysiology , whereby his main interest was the question of the structure of human consciousness .

In 1961 John Lilly took part in the first SETI conference in Green Bank . While Lilly carried out recognized scientific research until the 1970s, which moved in the border area between biochemistry , neurophysiology , behavioral physiology and psychology, his later publications increasingly concentrated on theories about consciousness. Lilly's contributions to the biology and behavior of dolphins are of scientific importance. His later work received attention in the New Age scene.

In the 1960s he caused an international stir when he wanted to teach dolphins English. He prophesied that in ten years humanity would be able to speak to dolphins. His research project received several million dollars in support from NASA. The research center on the island of St. Thomas was eventually closed due to unsuccessfulness. The 2014 documentary The Girl Who Talked to Dolphins, shot for the BBC, is about this project .

In Programming and Metaprogramming in the Human Biocomputer , he summarizes his findings as follows:

Plato's allegory of the cave

Plato's allegory of the cave

" Cave allegory : Some people are so tied up in a cave from birth that they constantly turn their backs on the light and can only look at a dimly lit cave wall. Everything behind them casts a shadow on the wall. Not seeing anything else, people mistake these shadows for the real things. This remains so when one of them, who has been untied, returns to the cave from outside and tries to explain the real situation to the others. "