The band Sigur Rós was founded in 1994 by Jón Þór Birgisson (Jónsi), Georg Hólm (Goggi) and Ágúst Ævar Gunnarsson. On the day the band was founded, Jonsí's sister was born, who bears the name Sigurrós and thus gave its name to the band.

From and personnel changes

The band made their debut in 1997 with Von , a still relatively dark, nature-loving album. Because of the long time that the group needed for the recordings, there were sometimes serious differences between their initial sound concept and the end result. The band initially considered recording the first album again, but instead a remix album was released the following year, Von brigði , on which the old songs were reworked.

The album title Von brigði is a play on words. On the one hand Vonbrigði means "disappointment" and is in contrast to the album title Von (in German: "Hope"). On the other hand, Von brigði can be translated as "Variations of Von ". Many Icelandic artists , mainly from the electronica sector, such as B. Múm or GusGus each contributed a remix for Von brigði . In return for the cost of recording their debut Von , Sigur Rós agreed to repaint the studio.

In 1999 the drummer Ágúst left the band, which almost led to the breakup of the band. But he was soon replaced by Orri Páll Dýrason. Furthermore, in 1998 the group also took on keyboardist Kjartan Sveinsson (Kjarri).

A year later the successor Ágætis byrjun appeared , which translated means "a good start". With the title Sigur Rós allude to the lack of coordination of the predecessor. Its gloomy mood takes a back seat in the new album, it is more structured and instrumented - an orchestra is also included. The album unites everything from quieter introspective sounds to orchestral outbursts, from interludes to symphonic long songs. The first copies of Ágætis byrjun , which were only published in Iceland, were put together by the four musicians themselves.

The English record company FatCat Records discovered Ágætis byrjun and released it outside Iceland, first in Great Britain in 2000 , then in Europe and the USA. Due to the good reviews, the band gained international attention for the first time and a steadily increasing level of awareness. Sigur Rós played in the opening act for the band Radiohead for some time and also toured alone e.g. B. through the USA.

This was followed by the publication of the EP Ný batterí (2000; in English new batteries) and the rare EP Rímur , on which they collaborated with the Icelandic poet Steindór Andersen in 2001.

In 2000, Sigur Rós performed unannounced in the small record shop japis in Reykjavík under the pseudonym "WHM". Under the pretext of only wanting to play cover songs by better-known local bands, they "covered" their own pieces; the concert was free. WHM was an abbreviation for “we hate music”.

On August 30, 2000, they gave one of their first concerts in Germany on Iceland's National Day at the Expo 2000 in Hanover. They turned down an appearance on the American David Letterman Show in 2001 because the producers only gave them about three minutes of playing time, which seems impossible given the size of their songs. Instead, they appeared on the Late Late Show with Craig Kilborn and on Last Call with Carson Daly, which gave them more time.

In 2001 they played in front of 12,000 spectators at the opening of Gay Pride in Reykjavík, which with up to 40,000 visitors in the following years became the most popular event in Iceland.

() and the new studio

Sigur Rós recorded the next album in a former swimming pool in the rural area of ​​Álafoss near Reykjavík. The pool was bought by the band, renovated and converted into a studio. This work turned out to be very complex. Among other things, part of the roof had to be opened in order to lift the mixer into the studio with a crane. The band used their studio, which was named sundlaugin (German "The Swimming Pool"), until 2009.

The initially nameless album came out in 2002. The singing on the album takes place in a melodic, non-existent fantasy language that Sigur Rós vonlenska (German: Land of Hope ) called. Both the album and the title were originally without a name, later the songs were given the names untitled 1–8, the album was given the name () because of the images on the cover, which are the same in brackets . The sound of the album became more minimalistic and calmer again. The exception is the 12-minute title Untitled 8 , which runs crescendo and ends in a loud, dynamic outburst. () is considered the band's "ghostly" album and was very successful despite its "inaccessibility".

Sigur Rós performing in Reykjavík in 2005 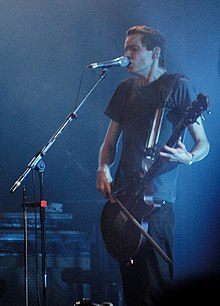 The album, released on September 12, 2005, is called Takk ... ( Icelandic for "thank you"), which was chosen to thank fans for making it possible for the band to purchase previous albums from the Live music. It is increasingly more open, friendlier and also more catchy than its predecessor.

Since January 2007 Sigur Rós has been working on a new album, which was released that same year. This is a double album called Hvarf-Heim (Isl. "Disappearance" / "Harbor" - "Home"). Hvarf includes studio recordings of the previously unreleased songs Salka , Hljómalind , Í gær and a new version of the songs Von and Hafsól , which were originally taken from their debut album Von . On Heim, however , you can hear acoustic versions of Samskeyti , Starálfur , Vaka , Ágætis byrjun , Heysátan and Von . Hljómalind was released as a single .

In addition, Sigur Rós simultaneously released a DVD ( Heima , isl. For "home") with recordings of their Iceland tour last year and a documentation of Iceland. Director Dean DeBlois combined recordings of the island with performances by the band. CD and DVD were released in Germany on November 2, 2007. Sigur Rós have sold over two million albums worldwide since then.

At the end of May 2008 the worldwide release of the album Með suð í eyrum við spilum endalaust ( Eng . "With a hum in our ears we play endlessly [continue]") was published on the band's homepage for the 23rd and 24th. Announced June 2008. With All Alright there is an English-language song on an album for the first time. It was recorded at London's Abbey Road Studios . On May 27, 2008 the video Gobbledigook was published on the homepage ; At about the same time, the full album was available there as a free streaming version. As the only single so far, Inní mér syngur vitleysingur was released.

In May 2009 the band announced that they had almost finished recording a new album. The songs should something quiet and atmospheric than on his MEÐ SUÐ Í EYRUM VIÐ SPILUM ENDALAUST or Takk ... . Drummer Orri has described the music as "melodic, but far less noisy and more out there than previous albums". The album was not due out until 2010.

In January 2010 Georg announced, however, that Sigur Rós will not release an album in 2010 because all band members (especially Jónsi) are busy with their own projects. According to Jónsi, all recordings were discarded. The band members sold their studio and rehearsal room and have been rehearsing in the drummer's garage ever since.

At the end of November 2011, the first live album Inni was released .

The sixth regular studio album was released at the end of May 2012 and is called Valtari . The first tour since 2008 followed in summer 2012.

At the turn of the year 2012/2013 Kjartan left the band to devote himself to his family and his own music projects.

Kveikur - first album as a trio

On 17./18. June 2013 released the band's seventh studio album in the United States and Great Britain. It was released in Germany on June 14, 2013. After Kjartan "Kjarri" Sveinsson left, it is their first album, which they officially recorded as a trio, and is entitled Kveikur (German: Kerzendocht). On March 22nd, the first video from the album appeared with the track Brennisteinn (Eng. Sulfur).

On October 1, 2018, Orri Páll Dýrason announced his departure on Facebook . As a justification, he gave the allegation of sexual harassment, which was brought against him in September.

In the fourth season of the US fantasy series Game of Thrones has Sigur Rós in the sent in April 2014 the second series with the title The Lion and the Rose (German title: The Lion and the Rose ) made a guest appearance as a musician at the wedding King Joffrey Baratheons. There they play a short excerpt of their modified version of the song The Rains of Castamere .

See also: Further use in films and series

With their spherical-sounding music , partly characterized by melancholy melodies, Sigur Rós have been able to achieve considerable success for over a decade, especially in Europe , but also in North America and Japan . Stylistically, they are most likely to be assigned to the widely interpretable areas of post rock , shoegazing or ambient . You yourself describe your music style as Slo-Mo Rock (Slow-Motion Rock). Sigur Rós have long been accompanied live by the Amiina string quartet , who also appear in the opening act. Ólafur Arnalds has recently appeared there .

Jónsi, the band's singer, who has been blind in one eye since he was born, sings partly in Icelandic ( Ágætis byrjun ), but also partly in vonlenska (from = hope, lenska = rural), a language he invented himself and which he used earlier To compose vocal melodies without having to finish the entire text. His falsetto singing and his special way of playing the guitar with a cello bow make the music unique.

Georg, the bass player, trained as a filmmaker before joining the band. He lived in the UK for a short time, which is why his English has less of an Icelandic accent than the others. His nickname is "White Fang" ("White Fang" - the English original title of the novel Wolfsblut by Jack London) because he has the ability to catch trout from rivers with his teeth.

The drummer Orri works full-time as a caretaker. Kjartan, the keyboardist, was the only band member who studied music. He graduated from Listaháskóli Íslands (Icelandic Academy of Arts) with a bachelor's degree in May 2007 . He is married to María von Amiina . “We were musically completely inexperienced amateurs who experimented and were happy about every unusual sound. (...) We have shown that you don't have to be a trained musician to make interesting music. ”So far, the band members have refused to make music for advertising or politics.