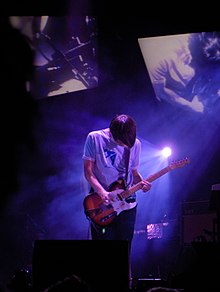 Radiohead is a British rock band formed in Oxford , England in 1985 . At that time still appearing under the name "On a Friday", in 1989 and 1992 respectively the renaming in Radiohead took place, after a song of the Talking Heads called Radio Head . The band made their breakthrough with Britpop and Alternative Rock , but from the mid-1990s their music became more experimental and approached post-rock and electronica .

Radiohead was inducted into the Rock and Roll Hall of Fame in 2019 after being nominated the previous year .

The band was founded in 1985 at the Abingdon School in Abingdon near Oxford - at that time under the name On a Friday , because they always rehearsed on Fridays. At the beginning of 1986 the first appearance in the Jericho Tavern in Oxford followed. In 1987 Yorke , O'Brien , Selway , and Colin Greenwood left school to study, but the band met regularly on weekends and holidays. It wasn't until 1991 that the band became increasingly professional and that year signed a contract with EMI for six albums. At the suggestion of the record company, the name was later changed to Radiohead .

Radiohead's first commercial release was the EP Drill in May 1992. At the time of recording, the band was still called On a Friday , but the name was changed a short time later, so that Radiohead was already on the cover. With the single Creep (first released in September 1992), which stayed in the charts of many countries for a long time , the band had their first great success. Still, for a long time the band had a very divided relationship with the song that made them famous, and it is only recently that creep has been played more often at concerts. 1993 appeared with Pablo Honey, the debut album, which reached number 22 in the British charts and was received muted by the critics. However, the following singles Anyone Can Play Guitar and Stop Whispering and later Pop Is Dead sold poorly, as did the EP My Iron Lung released in 1994 .

It was not until the second album The Bends , in which music producer John Leckie Nigel Godrich took part for the first time in the role of co-producer, who over time became the "sixth member of the band", that the band made it back to higher chart positions in 1995. The album was also mostly rated very well by critics. The Bends mostly contained melodic rock songs, but in terms of style and sound it stood out clearly from the then dominant Britpop .

After two years in which the band was almost exclusively on tour and tested new song material such as Airbag , Paranoid Android and Subterranean Homesick Alien , they released the album OK Computer in 1997 . At first it was received mostly restrained and was considered by not a few critics at a time when Oasis was considered by many to be the most important British rock band, as overly complex, overloaded and pretentious. But after a while OK Computer developed to a great success with critics and audiences, found even greater approval in surveys of music magazines than The Bends and was recognized by the press and fans as one of the best albums of the 1990s; meanwhile it is widely regarded as one of the best rock albums ever. With OK Computer , which won a Grammy in 1998 , the band finally broke new ground, which was unusual for the classic Britpop that had dominated until then , by experimenting with , for example, spatial sound , noise and computer-generated voices. OK Computer also made Radiohead known in the USA.

After a world tour, there was a break in the second half of 1998, during which the band rarely performed and avoided the public. This reluctance initially continued after the release of the fourth album Kid A in 2000. The album was hardly advertised, the band gave very few interviews, and music videos were only published on the Internet. In addition, no singles were released from Kid A. Nevertheless, the album, on which the band significantly expanded their experiments with different styles and unconventional sounds and song structures, reached number 1 in the US charts, possibly also because the album was available on the then globally popular music exchange Napster before it was released. Also, Kid A received, as has been the two previous albums, mostly very good reviews.

The fifth album Amnesiac was published in the middle of next year and consisted of further material of the same recording sessions as Kid A . Both albums are stylistically similar. In contrast to Kid A, however, singles were decoupled from Amnesiac , among which the Pyramid Song is the best known; the song is rhythmically unusual, but otherwise orientates itself more strongly than most of the other tracks on the two albums to classic song structures.

After another big tour, the band released their sixth album Hail to the Thief in 2003 , which is less based on electronic experiments than its two predecessors, but still differed significantly from the guitar-driven rock of the early days. The title of the album caused a sensation because it was interpreted in the USA as an allusion to the controversial outcome of the American presidential election in 2000 . To the annoyance of the band, Hail to the Thief was available in a raw mixed version on the internet a few months before the official release. In interviews, however, Radiohead was upset that EMI had provided the CD version of the album with copy protection against the will of the band .

With the release of Hail to the Thief , Radiohead's contract with EMI had expired. The five musicians showed little interest in extending it, but did not reach an agreement with another record company.

In 2003, Jonny Greenwood was the first band member to release Bodysong, a solo album as a soundtrack for the documentary of the same name by Simon Pummel . In 2006 Thom Yorke also released the album The Eraser , a solo record with electronically accompanied pop songs.

After a world tour in 2006, Radiohead worked on the completion of their new album In Rainbows . Since Radiohead had not signed a new record deal, the album, which was released on October 10, 2007, was only available as a download or disc box as a self-distribution through the band's website until December 2007. The customer determined the price for the download himself. The album is now also available on iTunes and on CD.

On August 5, 2009, Radiohead published the song Harry Patch (In Memory Of) on their website in honor of the oldest war veteran in the British Army of the First World War, Harry Patch , who died on July 25, 2009 . A few weeks later the band gave away their new song These Are My Twisted Words as a download, also on their website.

In 2010 fans of the band released a live recording of a concert in Prague: On August 23, 2009, 50 visitors filmed an entire concert from different viewpoints and published the recordings as a free download. The soundtrack for this was provided directly by the band.

In an interview, Ed O'Brien said the band would release a new album in late 2010. He contradicted singer Thom Yorke, who had previously stated that the band would only release EPs and singles. On February 14, 2011, Radiohead finally announced their eighth studio album -  The King of Limbs  - which was released digitally on February 18 and in physical form on March 25. At the end of 2011, several songs were released that were not ready in time for the album's release, including the single The Daily Mail . From 2012 to 2014 the band took a break while the musicians pursued other projects. In 2015 the group was commissioned to deliver the theme song for the film James Bond 007: Specter , but the result was ultimately rejected by the film studio as "too gloomy".

On May 8, 2016, her ninth album, A Moon Shaped Pool, was released as a download and via several streaming services; Since June 2016 the album has also been available on CD and vinyl. It was received mostly positively to enthusiastically by the critics.

On June 11, 2019, Radiohead released demos from the time of OK Computer after a hacker leaked the songs after attempting to blackmail them. The recordings were officially self-published as MiniDiscs [Hacked] for a limited period of time. The income generated in the context of the publication will benefit the social movement Extinction Rebellion , which campaigns against mass extinction and the climate crisis .

Radiohead have changed a lot stylistically over the years and can hardly be assigned to a single genre.

At the start of their careers, they were assigned to the Britpop wave. Not least because of the success of the single Creep , they were considered by some to be a one-hit wonder at the time. Their second album The Bends was then assessed by most of the critics as a surprising, consistent further development that "sums up the strongest moments of its predecessor Pablo Honey ". Although it still has a catchiness typical of the early Radiohead phase, it is much more complex and epic compared to its predecessor.

This tendency continued on their next album, OK Computer . The band combined the sound of The Bends with influences from ambient , avant-garde and electronic music. The result was received positively by critics almost without exception and is considered one of the most influential and important albums of the 1990s.

Tired of the long tour to OK Computer , the band waited until 2000 to release their follow-up album Kid A. Radiohead stayed true to their path of consistently developing their sound. The band gave no interviews to Kid A . In addition, no music videos were published or singles were released. The guitar plays a much smaller role on this album than on all previous albums, instead electronic sounds and influences from krautrock , free jazz and modern classical music dominate .

Like OK Computer , it won the Grammy Award for Best Alternative Music Album . Kid A was received very differently by critics and fans . Some see the album as a “total work of art that transcends borders”, but some fans couldn't do anything with the band's new direction. However, despite its complexity, the album was a commercial success.

The fifth studio album, Amnesiac, followed just a few months after Kid A and is often compared to this one, as the pieces on the two albums originated in the same sessions. Amnesiac , too, can by no means be described with one genre term alone, but uses elements from a wide variety of styles, jazz in particular is more pronounced here than on any other Radiohead album. Overall, however, it continues the direction taken on Kid A.

With the two releases Hail to the Thief and In Rainbows , Radiohead returned a bit to guitar music, but that doesn't mean that the electronic borrowings and broken song structures of the previous albums have disappeared. Rather, both albums are an intersection of all previous albums. For example, record tests online writes to In Rainbows : "One could even speak of stagnation because Radiohead apparently no longer necessarily strives forwards, but also sideways and backwards in order to reflect on virtues that have already been developed."

The Rolling Stone listed Radiohead as one of the 100 greatest musicians as well as the 100 best songwriters of all time at number 73.

In the course of time Thom Yorke (mentioned on the CDs as “Tchocky”, “Dr Tchock”, “The White Chocolate Farm” etc.) developed an idiosyncratic artwork together with Stanley Donwood . The collaboration with the former classmate began with The Bends . The artwork continued to develop and since OK Computer has been very important to the band. In Kid A and Amnesiac , it consists mostly of gloomy landscapes.

For Hail to the Thief , Yorke and Donwood developed a design that resembles a colorful city map with different "media" terms. Yorke took this from the news because it triggered certain feelings in him and, in his opinion, was therefore used specifically by broadcasters, companies and politicians. In an interview he refers to the " newspeak " (Newspeak) , one in George Orwell's novel 1984 occurring language.

Musical work outside the band