Public Viewing ( ˈpʌblɪk ˈvju: ɪŋ ) is a term used in German for the public live broadcast of sporting events or other events on video walls .

The expression is composed of the English public for "public" and viewing for "watch, look at".

Origin and meaning of the word

The expression public viewing was established as a neologism in German language in the run-up to the 2006 World Cup . It is a loan word that has a narrower range of meanings in German than in the English-speaking world , where the term generally refers to the public presentation of a thing - such as an open day or a laying out . Since the World Cup in 2006, the phrase has also been used occasionally in English by international associations and the media in relation to the broadcast of sporting events on giant screens. Usually the public screening on a screen is called public screening in English . Since 2007 public viewing has been listed in the Duden, and since 2011 the word "Rudelgucken" has been listed as a synonym . The term is now used in Japanese with the same meaning as in German. 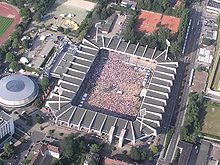 Public viewing in the Rewirpowerstadion in Bochum 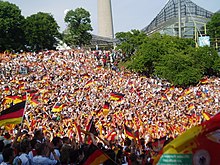 The direct broadcast for the joint follow-up of large numbers of viewers of major events already existed at the 1936 Summer Olympics . At that time, when television sets were still relatively expensive and not yet widely available in households, the competitions could be viewed publicly in so-called television rooms, at least in Berlin. However, due to the small size of the screens, only a smaller number of viewers could participate. In addition, this joint tracking of a transmission took place in closed rooms.

Following an initiative of the organizing committee (OC) at the international football association FIFA and the sports rights marketer Infront , the broadcast of the football World Cup 2006 on big screens in German cities was secured. The main reason for pushing the OK was the insufficient number of tickets.

Both the Infront agency and FIFA gave in on January 20, 2005 and approved the free public broadcast . Thus, every city and every municipality could, for example, set up large screen walls in public places or in multi-purpose halls and broadcast the games free of charge for the audience.

This free approval also explicitly applied to all non-commercial events in schools , churches , hospitals , companies or beer gardens . However, if a broadcast was sponsored , it was considered a commercial event for which royalties were levied. This also applied to all events where admission was charged. Only local and regional companies that were not competitors of the official FIFA sponsors were allowed to act as sponsors .

After discussions with the OC, FIFA allowed local organizers to sell sausages , French fries and German beer . The FIFA sponsor's drink ( Anheuser-Busch Bud ) did not have to be served.

The term public viewing attempts a new form of participation in major identity-creating events such as B. to describe a soccer world championship in your own country. This kind of collective follow-up in the circle of unknown like-minded people has only existed in the stadiums so far. In the opinion of many social scientists and psychologists , the incentive of public viewing lies in sharing common and simultaneously arising emotions, such as B. the joy of the victory of the preferred team, but also the sadness of the defeat. In contrast to watching a major event in front of a television set at home, the creation of such an emotional atmosphere is only made possible by technical innovations such as large screens or plasma televisions . Public viewing is characterized by the "controllability of positive emotions".

The legal basis for a possible licensing requirement for public viewing events in Germany is the copyright law . According to this, the broadcasting company has the exclusive right to retransmit a program and, in accordance with Section 87 (1) No. 3 UrhG, also the exclusive right to make the program perceptible in places that are only accessible to the public against payment of an entrance fee . There is usually no copyright protection for the transferred content itself, e.g. B. sporting events, so licensing regulations such as those issued by FIFA or UEFA for the public viewing of football games cannot be based on the content of the broadcast, i.e. the football game itself. The acquisition of licenses, even free ones, cannot be required here. German copyright law does not differentiate between commercial and non-commercial events. The football recordings made by FIFA are probably not considered film work i. S. v. Section 2 Paragraph 1 No. 6 UrhG. Although there is basically a motion picture protection according to 95 UrhG, but this does not include the right to reproduce radio broadcasts in accordance with § 22 UrhG. It should be noted, however, that the transmissions often also include other content that is protected by copyright, for example music. For this it may be necessary to acquire a license, for example from the collecting society GEMA .

Since sports associations such as FIFA or UEFA conclude extensive contracts with the venues of competitions at World and European Championships, the cities concerned are often contractually obliged to support the demands of the organizing sports associations. This can lead, for example, to requirements for necessary permits from the city.

The concept for the 2006 FIFA World Cup Fan Fest was developed jointly by FIFA, the World Cup Organizing Committee and the twelve World Cup cities. A public broadcast of the World Cup games took place in each of these World Cup cities as part of this official fan festival. In the twelve venues, FIFA financed a large screen with the technology and TV images as a so-called “city name” fan festival . With the help of the official sponsors, however, FIFA wanted to spend a maximum of 700,000 euros per World Cup city, all other costs had to be borne by the individual cities.

In Frankfurt's MainArena , the games were broadcast on a 9 m × 16 m double-sided LED video wall , which was installed in the middle of the Main on 22 m long hydraulic stilts. Both banks of the Main could be used as public viewing areas for up to 50,000 spectators. This artificial island weighed 160 tons without the screens .

In Cologne, a large screen was set up on Roncalliplatz between the south portal of Cologne Cathedral and the Roman-Germanic Museum. In Hamburg, a large screen was set up on the Heiligengeistfeld next to the Millerntor Stadium . In Stuttgart, the broadcast took place on five large screens on Schloßplatz . There was a large screen on the Friedensplatz in Dortmund, as well as in the immediate vicinity of the World Cup stadium in the Dortmund Westfalenhalle. In Berlin, in addition to the official fan festival on the Strasse des 17. Juni , at which up to 750,000 spectators were present, other live broadcasts from other organizers and the like took place. a. in the Sony Center , in the Waldbühne and in the temporary Adidas-Arena . In Düsseldorf , the Paul Janes Stadium on Flinger Broich was redesigned as the “Stadtwerke Düsseldorf Fan Stadium”. Up to 12,600 fans were able to experience all World Cup games live at the largest public viewing event in a non-host city. In Munich there were large screens in the Olympic Park , in Nuremberg on the Volksfestplatz .

On October 30, 2007, the term public viewing was registered in the trademark register of the German Patent and Trademark Office in connection with a logo as a word and image trademark . The rights holder was a company from Magdeburg that rents out large screen walls. The word / figurative mark was deleted after the end of the protection date on July 1, 2017.

The registration with the DPMA had no influence on the use of the term itself. Because the trademark owner can only demand license fees if the term is used in connection with his registered logo (see graphic). An attempt to protect the term public viewing itself as a pure word mark was rejected according to the DPMA register.

"Reason: Lack of any distinctive character or descriptive information (which must be kept free) ( Section 8 (2) No. 1 and 2 MarkenG )."

Public television performances in the open air, which last into the night after 10 p.m., may only be carried out in Germany if the noise protection requirements under immission law to protect the night's sleep are met. The restriction of noise protection is often expressly limited to the case that events are broadcast directly, e.g. B. Section 2 (2) of the ordinance of May 17, 2016 ( BAnz AT May 17, 2016 V1 ). In order for such events to take place during the 2010 World Cup, an ordinance on noise protection for public television performances in the open air about the 2010 World Cup was issued specifically for the period from June 1, 2010 to July 31, 2010 . Corresponding provisions already applied during the 2006 World Cup and the 2008 European Football Championship.

For the 2014 soccer World Cup, the ordinance on noise protection for public television performances in the open air was passed in Germany for the 2014 World Cup .

The German Federal Council also approved an exception for the 2016 European Football Championship and the 2018 World Cup , so that public viewings were again permitted after 10 p.m. Organizers had to apply for a permit from the responsible local authority.