Mogwai is a British post-rock band from Glasgow that was formed in 1995. The name is derived from Chinese and means something like "dark spirit" or "evil soul" (Chinese 魔鬼, mòguǐ, 魔 (dark), 鬼 (spirit)). The band got the inspiration for the name from the creature from the 1984 film Gremlins by Joe Dante. Stuart Braithwaite, the guitarist of Mogwai, however, said that this name had no deeper meaning for the band, they had wanted to do it for a long time find a better one. 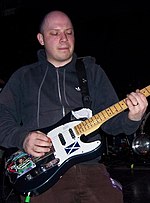 Stuart Braithwaite (guitar) and Dominic Aitchison (bass) met in the 1990s at a concert by Ned's Atomic Dustbin . The resulting acquaintance of the two fifteen-year-olds resulted in the formation of the band four years later, which was soon joined by drummer Martin Bulloch.

After the first concerts, John Cummings soon joined on guitar, followed by Brendan O'Hare (formerly Teenage Fanclub and Macrocosmica). But this was only part of the time, namely for the recordings of Mogwai Young Team . It was not until 1998 that Barry Burns became the last member with whom Come on Die Young was soon recorded.

In 2004 the band had the opportunity to appear as an opening act, namely with The Pixies and The Cure . You yourself also exert influence on other groups, e.g. B. to the band Explosions in the Sky or the Italian Giardini di Mirò as well as some other post rock groups. In 2008 Bulloch had to cancel some concerts due to heart problems.

Mogwai released the album Hardcore Will Never Die, But You Will in Germany on February 11, 2011 . Released on Rock Action Records, the follow-up Rave Tapes was released in early 2014. In 2015 John Cummings left the band. The album Every Country's Sun was released in September 2017 . After the departure of John Cummings and due to health problems of Martin Bulloch, Mogwai is supported by other musicians on her tours. Since 2016 Alex Mackay has been playing as guitarist and Cat Myers as drummer in live performances.

The group's music is sometimes referred to as ambient , but this description doesn't really match the sound of most pieces. Rather, the music can be clearly assigned to the rock sector, although many of the traditional characteristics of the category often do not apply. That concerns u. a. the track length of 3–5 minutes - which is often exceeded -, the development of sound patterns that often extend over the entire track, and the frequent absence of the average stanza-chorus-stanza scheme. The singing plays a subordinate role. Many pieces are instrumental, while others have heavily skewed vocals (e.g., with a vocoder on Hunted by a Freak ) or in a language that most listeners cannot understand (e.g., Dial: Revenge is Welsh sung). Stuart Braithwaite commented on this as follows:

“I think most people are not used to having no lyrics to focus on. Lyrics are a real comfort to some people. I guess they like to sing along and when they can't do that with us they can get a bit upset. "

“I think most people are used to having a text to focus on. Texts are a real comfort to some people. They probably like to sing along, and if that doesn't work with us, then they can get a little angry. "

- Interview with The Express

The pieces are mostly of a melancholy, spherical mood. The contrasts loud / quiet and energetic / restrained are very often played. The overall sound within a song is often crescendo , and the intensity and richness of the instrumentation often increases with the number of minutes. In addition to the usual rock instruments (drums, guitars, bass), some electronic instruments are also used . Mainly The Cure , Joy Division , The Jesus and Mary Chain , Pixies , Slint and My Bloody Valentine have influenced the band.

Gruff Rhys from the Welsh band Super Furry Animals and Tetsuya Fukagawa from the Japanese screamo band Envy have already made guest appearances as singers, each using their own language (Rhys: Old Welsh ; Fukagawa Japanese )

The band is known beyond their music for being very open about their opinions about other artists. When Mogwai played parallel to Blur at a festival in 1999 , T-shirts with the label “blur: are shite” were printed and sold. Mogwai head Braithwaite stated that this statement was a fact and that Blur were "one of the weakest bands on the planet". Her official website also frequently features derogatory comments on fellow musicians. For the album title Songs of Mass Destruction by Annie Lennox , Braithwaite said that it was “really topical” (“very contemporary”). Lennox has chosen a title that is so half-hearted that the Mogwai album title Mr. Beast sounds almost intellectual.