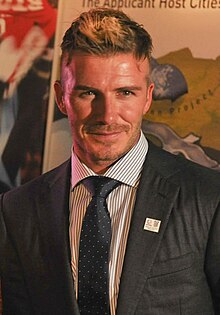 Model and footballer: David Beckham is seen by many as a metrosexual protagonist.

According to the definition, metrosexual men also allow characteristics that are traditionally assessed as female, and show outward behaviors that to date have been assigned to the lifestyle of women or the cliché of the homosexual man. The term is therefore often defined (and not only colloquially) as if the (heterosexual) man dresses “like a gay ”, which quotes common clichés about male homosexuality.

Metrosexuality is described as a modern lifestyle that (merely) differs less between women and men in terms of fashion, but is reduced to accessories and external attitudes. The American sociologist Robert Heasley describes metrosexuality as one of six forms of straight queer masculinities . But he prefers the expression stylistic straight-queerness .

So-called metrosexuals are said to be an important target group for the fashion and cosmetics industry. Its function as a lucrative niche in the market and the considerable advertising efforts in this area raise the question to what extent metrosexuality is a media hype that is artificially hyped up by advertising . Mark Simpson critically stated in an interview in 2006 that the expression he coined metrosexual (ity) , which was supposed to shed light on today's consumer culture in a socially critical way, was picked up by an "American marketing woman" and thus - ironically - just become an instrument of "Marketing propaganda" had become.

When coining the term, it was not clear to Mark Simpson that “Metro” in “Metropolis” stands for mother (μήτηρ, μητρός, the mother city of a colony). Literally, the Greek-Latin term Metrosexual So mother sexually . Simpson later stated in an interview that the term was still applicable because of its postoedipal nature.