In algebra , a sub-discipline of mathematics , an ordered body (also called an arranged body ) is a body together with a total order " " that is compatible with addition and multiplication. The best known example is the field of real numbers . Bodies of the characteristic cannot be arranged in a structurally compatible manner. An important example of a field of characteristic 0, which cannot be arranged in a structurally compatible way, is the field of complex numbers .

A body on which a total order is defined is called an ordered body (or arranged body ) if the order is compatible with body operations, i.e. H. if the following axioms of arrangement apply to all of them :

Instead of the second condition, the following can also be required:

The positive area is then defined as the set of all positive elements, i.e. h .: .

One can show that for is equivalent to , that is , the arrangement is clearly determined by its positive range.

A positive area fulfills the properties

A preorder is a subset , which

A preorder is weaker than an order and only defines a partial relation on the body. 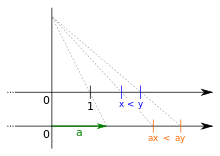 Every ordered body has the characteristic . This follows directly from the latter property .

Every part of an ordered body is ordered. As for every field of characteristic 0, the smallest contained field is isomorphic to the rational numbers , and the order on this sub-field is the same as the natural order on .

The order on a parent body induces a topology , the order topology to that through the open intervals and as sub-base is generated, and addition and multiplication are continuous with respect to this topology.

An ordered body is called orderly complete when every limited subset of the body has an infimum and a supremum .

The field of real numbers can be characterized (except for isomorphism) by the following property:

is a fully ordered body.

→ More generally, bodies that only allow one body order for the reason given here are Euclidean bodies .

In synthetic geometry , in the context of determining possible side divisions of the affine plane over a formally real body, all conceivable arrangements of such bodies are also classified by certain nontrivial square characters of the body. → See division of pages .

Wikibooks: Math for Non-Freaks: Conclusions of the Axioms of Arrangement  - Learning and Teaching Materials