Joss Stone at the MuchMusic Video Awards in Toronto (2007)

Joss Stone (born April 11, 1987 in Dover , England ; actually Joscelyn Eve Stoker ) is a British soul singer and actress . Along with Amy Winehouse and Duffy, she is one of the most popular soul pop singers of the 21st century, and together with them she has helped popularize classic soul and jazz in popular music again. One of her most famous trademarks is that she always appears barefoot . 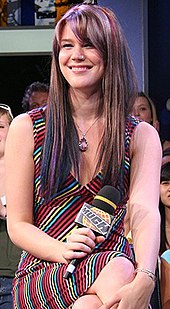 Stone grew up in a small village in the county of Devon, mainly playing American soul and R'n'B music. The first album she bought should Greatest Hits of Aretha Franklin have been, which they animated to sing. At the age of 14, she took part in the BBC's Star For A Night talent competition, in which she sang Donna Summers' 1979 hit On the Radio . She received a lot of attention with Aretha Franklin's (You Make Me Feel Like) A Natural Woman .

At the age of 16, after adopting the stage name Joss Stone , Stone flew to New York with her mother to audition . Producer and CEO of record label S-Curve , Steve Greenberg was soulful Stones interpretation of On the Radio by Donna Summer enthusiastic and gave her a record deal. Together with soul singer Betty Wright , Greenberg worked on Stone's voice. In four days they recorded some cover songs together with well-known soul musicians such as guitarist Little Beaver , Angie Stone and Questlove from The Roots .

Greenberg was so enthusiastic about the new arrangements of mostly unknown songs from the 1950s to 1970s that he decided to publish the recordings as an album in order to make Joss Stone better known before the actual start of his career. The album The Soul Sessions was released on September 16, 2003 in Great Britain and in Germany on February 20, 2004. It was in the German charts for a total of 37 weeks .

The first single was a cover version of White Stripes ' Fell in Love with a Boy (originally Fell in Love with a Girl (2002)) released (in Germany on March 8, 2004). This was followed by the single Super Duper Love (Are You Diggin 'on Me?) (Part 1) . The Soul Sessions has sold over two million copies worldwide. The album went gold in Germany and the US and platinum in the UK. It reached a top 10 ranking in 13 countries.

After the success of The Soul Sessions , Stone's first album, Mind, Body & Soul, followed in 2004 . She co-wrote eleven of the 14 songs on this album and worked with greats like Beth Gibbons from Portishead . With the album she immediately reached number 1 in the UK charts, making her the youngest singer to ever do this. In Germany, the album was released on September 24, 2004 and entered the album charts at number 8. It stayed on the charts for 36 weeks and climbed to number 7 (a total of five top 10 weeks). In February 2005 she received gold for 100,000 albums sold in Germany .

The first single You Had Me was released in Germany a few days before the album on September 13, 2004. This was followed by the singles Right to Be Wrong , Spoiled and Don't Cha Wanna Ride? . As usual with artists outside the mainstream, the singles were not a great success, the single releases only drove the album sales up. Shortly after the album was released, she separated from her previous manager, her mother.

At the end of 2004, Mind, Body & Soul Sessions was released on DVD with a recording of a concert by Joss Stone. It was recorded on September 9, 2004 at Irving Plaza , New York . The DVD contains 13 live songs from her two studio albums and her first three music videos.

Stone as a model

In 2005/2006, Stone worked briefly as a model for the US fashion chain The GAP . During her time as a model, she recorded a song ( see discography ) and made a short video. The Right Time (a cover by Ray Charles ) was made available for free for a few days as a download from The GAP's website and published on a promotional CD. Bryan Adams photographed Joss Stone for Hear the World Foundation magazine . 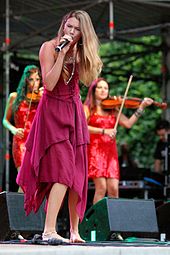 Joss Stone in a live appearance in 2010. She is known for always performing barefoot.

Introducing… Joss Stone , Stone's third album, produced by Raphael Saadiq , was released in March 2007 . There are 14 tracks on this album, including Music (recorded with Lauryn Hill ). Tell Me 'Bout It and Tell Me What We're Gonna Do Now have already been released , the latter is a duet with rapper Common . This is followed by Bruised but Not Broken and Put Your Hands on Me for various radio stations.

Stone earned an entry in the Guinness Book of Records for being the first woman to turn one of her video clips ( Tell Me What We're Gonna Do Now ) into a Product Red . This means that the clip can be bought online via iTunes and the proceeds go entirely to (RED) , an organization set up by U2- Frontmann Bono to help women and children in Africa infected with HIV and AIDS .

Stone's studio album LP1 was released on July 26, 2011. It was produced in Nashville together with David A. Stewart , the co-founder of Eurythmics , within six days and was released on Joss Stone's own label Stone'd Records , which she founded in early 2011 to no longer depend on her original record label EMI be. For this album she therefore also worked with Surfdog Records .

Water for your soul

The album was released on July 31, 2015 and is characterized by reggae elements. The album was created in collaboration with Damian Marley , whom Stone met as a member of the band SuperHeavy . In connection with the release of the album, Stone played two exclusive record launch concerts in Switzerland in Zurich and Murten .

In 2017 Stone founded Project Mama Earth with four other musicians , which recorded the EP Mama Earth .

On January 17, 2019, after a long musical break, Joss Stone released the single My Love Goes On in collaboration with British singer James Morrison , which made it into the airplay charts of several radio stations at the end of February.

In March 2019, she illegally traveled to Syria as part of her Total World Tour to perform at Al-Malikiyah . In the same month she performed in Turkmenistan and North Korea . In July 2019, Stone was denied entry to Iran , the last stop on their journey.

In August 2020, Joss hosted the A Cuppa Happy podcast .

Stone is a vegetarian and supports the animal rights organization PETA .

The Joss Stone Foundation supported more than 200 charities around the world as Stone completed its world tour. The primary goal was to help raise public awareness and support these charities.

On June 14, 2011, two men, aged 30 and 33, were arrested after a neighbor watched them explore Stone's Devon country home from their vehicle. The called police found swords, ropes and a body bag on the suspects, as well as photos and a floor plan of their property. A possible motive for the act could be the singer's fortune, which is estimated at 10 million euros. The two men were taken into custody and sentenced in April 2013, the older to life imprisonment with at least ten years and eight months without parole, the younger to 18 years.

In 2006 Stone made her cinema debut as the fortune teller Angela in the fantasy film Eragon - The Legacy of the Dragon Riders . In the 13th episode of the third season of the American series American Dreams , Stone ended up having a small role as a singer in a club. She sings a country version of her hit Right to Be Wrong . In the third and fourth seasons of The Tudors , Stone plays Anna von Kleve , the fourth wife of Henry VIII .

In the 2010 video game James Bond 007: Blood Stone , Stone plays the Bond girl Nicole Hunter . She also sings the song I'll Take It All by Dave Stewart during the opening sequence. This song was produced especially for the game.

In October 2018, Stone was a guest actor in the fifth season of the musical television series Empire , Wynter is an artist from a London record company.

Video albums (including albums by other artists)

Stone contributed titles to the soundtrack of several films, including:

In February 2005 Stone won two BRIT Awards ; In 2005 she was also nominated for three Grammy Awards . They also won in 2007 along with John Legend and Van Hunt with the song Family Affair the Grammy for Best Performance by a Duo or Group with Vocal - R & B .