The small-bore shooting (KK) is an Olympic competition discipline and does not differ greatly from the airgun shooting , is only in the small-bore shooting the target between 25 and 100 meters and correspondingly larger. When shooting with small caliber weapons at 50 m (the standard range), the ring mirror has a diameter of 15.44 cm and the ten is 10.4 mm.

Small-caliber weapons (rifle and pistol) are called " firearms " in shooting sports (in contrast to air guns or air guns ).

With the air rifle, shooting is primarily done in standing, with small caliber standing, kneeling or lying down (there are still different "beginners" positions, for example lying down with support , etc., but these are not carried out in an official competition program.) The shooting equipment corresponds to that for air rifle shooting.

In Germany, small- bore weapons from the age of 14 and under 18 may only be fired in shooting sports clubs if the original consent of the custodian is available for the shooting or if a custodian is present during the shooting. A qualified shooting supervisor must be present when shooting (and may not take part in the shooting).

Rules for international shooting with small-caliber weapons can be found in the sports regulations of the German Rifle Federation .

There are different types of small bore shooting: → Rifle disciplines

The order in which the shooting takes place is specified in the sports regulations. It always starts with

The right knee is placed on the floor, under the instep of the right foot the foot is lifted by a "knee end roll" so that the flattened toe of the shoe can lie flat on the floor. The left elbow is placed on the knee of the bent left foot. A shooting sling is used here. 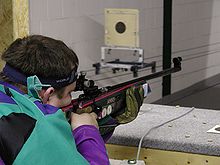 The rifle is held by a "shooting sling" attached to the left arm. The shooter lies at a slight angle to the target on a surface (as in biathlon ). This attack gives the best results (200 out of 200 rings have already been achieved).

You stand free and put your rifle on your hand, your elbow on your hip .

If you want to purchase a small-bore rifle , you need a weapon possession card (WBK). You have to apply for this at the responsible weapons authority (district office, etc.). The prerequisite for this is the age of majority and proof of needs from a recognized shooting sports association. A need only arises if you have demonstrably trained regularly in a club either once a month or 18 times a year with a weapon that requires a license. In addition, to acquire a WBK you have to be reliable and blameless, i.e. you must not have been convicted of any criminal offense or belong to an organization that is dubious under the rule of law. Ultimately, you also have to be able to prove that you have passed a weapon proficiency test.

However, there are exceptions: Top marksmen (state cadres, etc.) can purchase small-caliber weapons from the age of 14; the legal text contains a paragraph for this (public interest must exist).