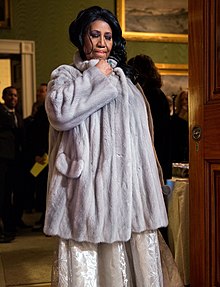 Aretha Franklin before an appearance at the White House , 2015

Aretha Louise Franklin (* 25. March 1942 in Memphis , Tennessee ; † 16th August 2018 in Detroit , Michigan ) was an American Soul - singer , songwriter and pianist . Because of its outstanding importance for soul music, it is also called "First Lady of Soul" or " Queen of Soul ". Her musical spectrum also included R&B , gospel , jazz , pop and dance .

Aretha Franklin was born on March 25, 1942 in Memphis, Tennessee. Her father, Clarence LaVaughn Franklin, was a well-known Baptist minister . Aretha grew up with four siblings in the industrial metropolis Detroit (US state Michigan ). Through her father, she came into contact with music at an early age. She sang with her two sisters Carolyn and Erma in the choir of her father's New Bethel Baptist Church. Well-known musicians and singers such as Mahalia Jackson , Sam Cooke , Clara Ward and the Ward Sisters attended the services. Aretha took singing and piano lessons from the composer and gospel singer James Cleveland .

In 1956 her first LP was released, a gospel album . At the age of 18, she began recording pop music in addition to gospel . In 1960, Columbia Records released their first pop record. Although the LP was unsuccessful, it opened up a new career as a club singer for her. In 1967 she moved to Atlantic Records . There she made the breakthrough with her first single: I Never Loved a Man (The Way I Love You) , which was recorded together with Do Right Woman, Do Right Man at Rick Hall's FAME Studios in Muscle Shoals (Alabama) , sold over a million times.

At the end of the 1960s she became one of the icons of black music and was nicknamed "Queen of Soul". Their number one hit Respect from 1967 became an anthem of the Afro-American civil rights movement and soon became one of the most important soul classics. Die Zeit referred to the song as the "Manifesto of the black liberation struggle". The theme of the song also made Respect an anthem for the women's movement . 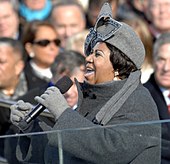 After appearing in the film Blues Brothers , she moved to Arista Records in 1980 . There she was able to build on earlier successes with further number one hits and Grammys . Her most successful albums were Jump to It (produced by Luther Vandross ), Who's Zoomin 'Who (produced by Narada Michael Walden ) and A Rose Is Still a Rose . In her Arista years she recorded many duets, including I Knew You Were Waiting (For Me) with George Michael , Sisters Are Doin 'It for Themselves with the Eurythmics , Gimme Your Love with James Brown and Through the Storm with Elton John . In 1986 Jumpin 'Jack Flash , recorded with Keith Richards , appeared on the album Aretha . In 1998 she stepped in for Luciano Pavarotti and sang Puccini's opera arie Nessun dorma . In 2003 she ended her collaboration with the Arista Records label and founded her own Aretha label. In 2008 her first Christmas album This Christmas Aretha was released . In 2011, A Woman Falling Out of Love appeared on her own label, Aretha's Records . Shortly afterwards she returned to a big label and in 2014 released a cover album on RCA Records with pop and soul classics, such as the song Nothing Compares 2 U, written by Prince .

Aretha Franklin held the record for most singles in the US charts for a long time and was one of the artists with the most sold records in the world. She supported a number of charities and political activists, including the National Association for the Advancement of Colored People and the Special Olympics .

Aretha Franklin had been extremely afraid of flying since an incident in 1984 , which is why she has only appeared in North America since the mid-1980s. In 1983 she last visited Europe. In 1999 her autobiography From These Roots was published .

Franklin had their first son Clarence at the age of twelve and a second son Edward at the age of fourteen. From 1961 to 1969 she was married to Ted White, who was also her manager. He is the father of her son Ted Jr., born in 1964. After separating from White, she had a fourth son, Kecalf, with her tour manager Ken Cunningham. From 1978 to 1984 she was married to actor Glynn Turman .

In 2010 she was diagnosed with pancreatic cancer. Aretha Franklin died on August 16, 2018, at the age of 76, from cancer, a neuroendocrine tumor of the pancreas.

In a commercial for the Snickers chocolate bar brand for German television (2010), Franklin played a diva. The spot filmed by director Craig Gillespie and cameraman Emmanuel Lubezki for BBDO New York was also available in a modified form in the USA. There Franklin played alongside Liza Minnelli , who played a man who had become a diva. In 2015, Franklin appeared in the American Express credit card commercial , in which she shared her life.

In 1972 Franklin recorded the live album Amazing Grace on two evenings : It was created in the atmosphere of a live concert with an audience at the New Temple Missionary Baptist Church in Los Angeles. The recordings were filmed by a film team led by director Sydney Pollack . Due to a technical error, however, the audio and video tracks could not be synchronized and the film project was abandoned. When digital solutions finally allowed it to be completed, Aretha Franklin refused permission to perform. It was only after her death that the documentary Aretha Franklin: Amazing Grace could be shown with the consent of her family. It premiered on November 12, 2018 at the DOC NYC Documentary Film Festival in New York City .

Franklin has received numerous music awards, including 18 Grammy Awards . She received the Grammy Award for Best Female R&B Vocal Performance eleven times. She is one of the performers with the highest number of records sold worldwide .