Estefan was born in 1957 to Gloria García and José Fajardo. Her father was the bodyguard of the wife of the dictator Fulgencio Batista . Estefan's maternal grandfather Leonardo García immigrated to Cuba from Pola de Siero in Spain, where he married Estefan's grandmother. In the turmoil of the revolution , her parents fled with her to Lafayette in the United States at the age of 16 months and then settled in Miami . Later the father took part in the Bay of Pigs invasion as a captain in a tank unit , was captured but extradited again to the United States. The family lived in rather poor conditions in the Cuban district of Miamis. The father entered the American military service and volunteered for the Vietnam War . From there he returned to the United States as a war veteran after a long imprisonment, badly health and mentally damaged. Gloria Estefan then decided to study psychology. At that time she attended the St. Michael Archangel School and the "Our Lady of Lourdes" Academy in Miami. Meanwhile, Estefan's mother worried about her sick father. In the meantime, her mother also worked as a teacher in Miami. Gloria Estefan graduated from Miami University in 1979 with a Bachelor of Arts in Psychology and French. During her studies, Estefan worked as an English, Spanish and French interpreter at Miami International Airport . Estefan was raised a Catholic .

At a wedding reception in 1976 Estefan met her future husband, Cuban compatriot Emilio Estefan junior. She married him on September 2, 1978. The couple has a son (* 1980) and a daughter (* 1994). The family lives on Star Island in Miami Beach .

Estefan also met Emilio's band "Miami Latin Boys" at the wedding reception in 1976. She joined them and sang in the band while studying. The group was renamed Miami Sound Machine a year later . They released their albums on the Miami-based record company Audiofon Records. In 1977, Live Again Renacer was their first album. Her first albums contained Spanish and English titles and received little attention.

In 1980 the group signed a contract with CBS International and released the album Miami Sound Machine there , which increased the group's popularity. She became better known in the summer of 1984 when she turned to English-language disco-pop: Dr. Beat became the group's first major success. The song was included on the globally successful album Eyes of Innonce . The following album Primitive Love (1985) contains the US top ten hits Conga , Bad Boy and Words Get in the Way . With the latter title, the group proved that they can be successful with both ballads and pop songs. Estefan sang the song Hot Summer Nights for the film Top Gun . 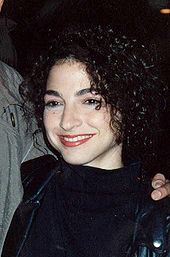 Estefan at the 1990 Grammy Awards

With the albums Let It Loose (1987) and Cuts Both Ways (1989) sold millions of times worldwide , the group initially became Gloria Estefan & the Miami Sound Machine. Let It Loose includes the US number one hit Anything for You , the top ten hits 1-2-3 , Rhythm Is Gonna Get You and Can't Stay Away from You . In 1989, Gloria Estefan first appeared as a solo artist - but she is still accompanied by the Miami Sound Machine in changing line-ups at her concerts.

On March 20, 1990, Estefan was seriously injured in a traffic accident and only recovered very slowly from the consequences of the accident. She then processed her experience in the album Into the Light (1991), from which the US number one hit Coming Out of the Dark was released.

In mid-1993 , the absolute breakthrough came with Mi Tierra , an album with purely Spanish-language titles: over eight million copies sold worldwide and a Grammy . In 1995 she was able to build on the success again with Abriendo Puertas , for which she received her second Grammy.

In addition, Estefan has also continued to devote himself to English-language pop. In the fall of 1994, Hold Me, Thrill Me, Kiss Me , a compilation of the singer's favorite songs, came out. In mid-1996 Destiny followed with the Olympic theme Reach and in 1998 Gloria with various successes such as Oye mi canto and Heaven's What I Feel .

Estefan had her first cinema appearance with Meryl Streep in Music of the Heart (1999).

On New Year's Eve 1999, Estefan and her family organized a mammoth concert for their Spanish-language album as a millennium celebration: Alma Caribeña (2000). The piece No me dejes de querer that followed, won a Latin Grammy as best music video in 2000 .

After the release of the album Greatest Hits Vol. 2 (2001) it became a little quieter around Estefan, who has meanwhile also worked successfully as a children's book author. In the late summer of 2003 her album Unwrapped was released , on which she mainly presented originally Latin American arrangements as English-language titles. With 90 Millas , she released her fourth album in September 2007, exclusively in Spanish.

Estefan has her musical roots in both English-language pop music and Latin American rhythms.

Estefan has become a major pioneer of Latin American music in the United States. All lyrics have been translated into English for the American audience, and in Abriendo Puertas all rhythms and songs are explained to the listeners in English.

Her Spanish-language album Alma Caribeña is a so-called concept album in which Gloria Estefan devotes herself almost exclusively to the slow rhythms of bolero and bachata . Nevertheless, Gloria Estefan could no longer build on the success of her previous albums. The reason for this is probably that the album (with the exception of No me dejes de querer ) contains fewer danceable tracks, but more ballads.

In the title song of the album of the same name, Unwrapped , Gloria Estefan makes use of Andean culture for the first time. The music video was filmed on a large scale for the first time in the historic ruins of Machu Picchu in Peru . The song corresponds to a modern huayno . Text and music come from the Peruvian composer and singer Gianmarco Zignago .

Estefan also promotes young talent, an example of which is the Brazilian music group Só Pra Contrariar . Through the collaboration, this group became very well known in Latin America and the lead singer Alexandre Pires is now a successful solo artist. In particular the song Santo, Santo , which was released in 1999 on the album Juegos de amor by Só Pra Contrariar with Gloria Estefan, played a major role. The song and the video climbed the hit lists in Spanish-speaking countries, in Europe (except Spain) the song was never published except for testing purposes by BMG . That changed with the current compilation Oye mi canto from October 2006, when this song was officially released on a phonogram for the first time throughout Europe.

In November 2015, Estefan received the Presidential Medal of Freedom from US President Barack Obama . 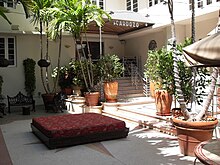 The Cardozo Hotel on Ocean Drive in Miami Beach, Florida

Estefan and her husband own several businesses, including seven Cuban restaurants. The restaurants are located in Miami , Miami Beach , Downtown Miami , the American Airlines Arena, Orlando , Mexico City and Puerto Vallarta ( Mexico ). They also own two hotels, the Costa d'Este in Vero Beach and the Cardozo in Miami Beach. They include shares in the Miami-based football team Miami Dolphins .