The title of this article is ambiguous. Further meanings are listed under Pentagon (disambiguation) . 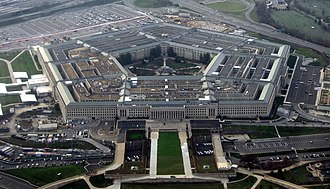 With its 280-meter-long outer walls, a floor space of around 135,000 square meters, an office space of around 344,280 square meters and a volume of around 2 million cubic meters, it is the tenth largest building in the world and the largest single administration building. It lies on the Potomac River in Arlington ( Virginia ) right next to the Arlington National Cemetery on the border with Washington, DC The total length of corridors amounts to almost 17.5 miles (about 28.2 km). Every point under construction can be reached on foot in under seven minutes from any other point within the building. 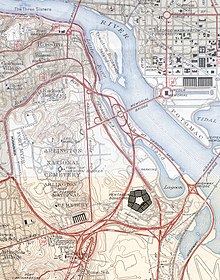 In 1941, the War Ministry , which had 23,000 employees at the time, suffered from acute space shortages and was also spread across 17 different buildings. In July of the same year Brigadier General Brehon B. Sommervell asked to solve these problems with a new building, which was originally only intended as a temporary solution.

The US Congress initially had concerns about the expected high construction costs, but on August 14, 1941, given the war situation in Europe, it gave the green light for the construction and provided the necessary funds. In the event of the USA entering the war, the Department of Defense should be able to work.

Originally, the building was to be built at a different location. The proposed building plot was known as Arlington Farms and was framed by five streets, which gave the building its characteristic shape. However, President Franklin D. Roosevelt feared that the huge office complex might obstruct the view of Washington, DC from Arlington National Cemetery , and asked for another site to be found. Another requirement of Roosevelt was not to use any material from warring states for the construction, which meant above all marble (from Italy). So the Pentagon had to be built out of concrete.

The final location was found 1.2 kilometers downstream on the Potomac River. The old Hoover Airport, a former brick factory , a racing area and a poor settlement called Hell's Bottom were located here .

The five-sided shape was retained and the final version with an open courtyard was designed. Each side of the pentagon consists of five parallel rows of buildings (the so-called "rings"), so that only the employees on the very outside in ring E or inside in ring A have the chance of a "garden view". In addition, each ring has five floors. One advantage of the chosen design is that you can reach any place in the Pentagon in about seven minutes.

Under the direction of Colonel Leslie Groves , later military director of the Manhattan Project and based on the design of the American architect George Bergstrom (1876–1955), 14,000 workers and 1,000 architects now worked in three shifts around the clock. Started on September 11, 1941 and completed after 16 months on January 15, 1943, the construction cost 83 million  US dollars .

The Pentagon after the September 11, 2001 impact

Explosion captured by a surveillance camera

View of the Pentagon from Arlington National Cemetery

One of the terrorist attacks on September 11, 2001 was aimed at the Pentagon, which was punctually damaged on the 60th anniversary of the start of construction. 184 people were killed. Thanks to the fortified construction from 1941, which was originally reinforced to cope with the burdens of files, no more people were killed. The security windows and the sprinkler system newly installed or overhauled shortly before the attacks in 2001 also saved the lives of many people on the 1st floor and in the adjacent blocks. The first floor collapsed only 19 minutes after the Boeing 757 hit and the fire broke out.

At first, the impact hole was almost impossible to make out, as the hijacked Boeing 757 hit an iron gate for a supplier in the middle and only exploded in a kerosene fire cloud in the building complex .

On the anniversary of the attack in 2008, a memorial to the victims was inaugurated, the Pentagon Memorial .

On the evening of March 4, 2010, 36-year-old American citizen John Patrick Bedell , from Hollister , California , shot a gun at two security guards at 6:40 p.m. at the main entrance, injuring them slightly. The security guards protected with gunshot vests - who had previously asked Bedell for his ID - then returned fire, and Bedell was hit in the head. He died a few hours later in the hospital. In addition to his pistol, Bedell had two semi-automatic weapons and several magazines with ammunition in a pocket. Other magazines were found in his car during the investigation.

As for the motive, the US Federal Police FBI said that Bedell had accused the government on the Internet of merely staging the terrorist attacks of September 11, 2001 , and that he was a supporter of conspiracy theories . Bedell had posted a text on the Internet according to which he was destined to “do justice” to the death of a Marine officer . In 1991, Marine Colonel James Sabow was found dead in his garden. According to the investigation at the time, Sabow had killed himself. According to Bedell, the death of James Sabow is supposed to "help uncover the truth about the terrorist attacks of September 11, 2001".

Status of the building

On July 27, 1989, the Pentagon was listed as a building on the National Register of Historic Places . It has been a National Historic Landmark since October 5, 1992, making it one of 121 historic sites of its type in Virginia.

Command of the armed forces

The Pentagon is to be connected to the armed forces through a spider web-like global communication system, the Global Information Grid .