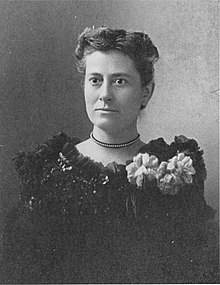 Williamina Paton Stevens Fleming (born May 15, 1857 in Dundee , Scotland , † May 21, 1911 in Boston , Massachusetts ) was an American astronomer . She developed a system for classifying stars and discovered numerous gas nebulae , stars and novae .

Her parents were Robert Stevens and Mary Walker Stevens. She attended Dundee public schools and became a student teacher when she was 14. She married James Orr Fleming. When she was 21 years old, the couple moved to Boston, Massachusetts. Her husband left her when she was pregnant with her son Edward. So she had to look for a job to earn a living for herself and her child.

She found a job as a domestic servant in the home of Professor Edward Charles Pickering . Pickering, impressed with Fleming's intelligence and dissatisfied with his male assistants at Harvard College Observatory , said his domestic servant could do their job better. In 1881 Pickering commissioned Williamina with office work at the observatory and, from 1886, with the classification of stars. She devised a system for classifying stars and helped implement it. The system was based on assigning a letter to each star depending on how much hydrogen could be observed in its spectrum . A stars had the most hydrogen, B stars a little less, and so on. In total, Fleming grouped the stars into 17 categories.

Annie Jump Cannon improved the system and developed a simpler classification based on temperature. Fleming took part in the cataloging of the stars, which was later published as the Henry Draper Catalog . In nine years she cataloged more than 10,000 stars. In her work, she discovered 59 gas nebulae , 310 variable stars and 10 novae . In 1907 she published a list of 222 variable stars that she had discovered.

She was given responsibility for dozens of women employed to perform mathematical classifications, and she edited the observatory's publications. In 1899 she received the title of Curator of Astronomical Photographs and in 1906 she became an honorary member of the Royal Astronomical Society of London - the first woman to receive this honor. Shortly thereafter, she received an honorary scholarship from Wellesley College . Shortly before her death, the Mexican Astronomical Society awarded her the Guadalupe Almendaro Medal for the discovery of new stars.

Fleming came to believe that astronomy was an appropriate field for women. In her article, A Field For Woman's Work in Astronomy , she went into more detail about the work of herself and her colleagues at the observatory and tried to strengthen the motivation of women to get involved scientifically in astronomy.

The moon crater Fleming (together with Alexander Fleming ) was named after her in 1970 .