The Orion [ oʀiːɔn ] is a striking constellation of the winter sky on the celestial equator . It has two stars of the first magnitude , three stars of the second magnitude at approximately the same distance form the Orion belt .

In the cycle of precession of the earth's axis, Orion currently appears at its almost northernmost position, will reach its southernmost in 13,000 years and then cannot be fully seen from Central Europe.

Orion is a mythical skyhunter, with the stars Betelgeuse (α Orionis, part of the winter triangle ) and Bellatrix (γ) forming the shoulder, the stars Rigel (β Orionis, corner of the winter hexagon ) and Saiph (κ) forming the feet. The belt stars Alnitak , Alnilam and Mintaka (ζ, ε and δ Orionis) in a strongly overstretched angle are also called three kings , Jacob's staff or Jacob's ladder and are part of the open star cluster Cr 70 .

The main stars - apart from the red giant Betelgeuse - are of a similar age and size , which suggests that they originated together.

In the lower half in the middle of Orion's “sword hanger”, the emission nebula  with the brightest surface area can be seen with the naked eye as Orion Nebula M 42 . The pronounced star formation area surrounds the trapezoidal stars θ 1  Orionis and θ 2  Orionis and represents the shining tip of an extensive cloud complex of interstellar matter that pervades the entire constellation. To the north over M42 is the part nebula M43 , also known as the Little Orion Nebula or de Mairan's Nebula .

A chain of stars is called a "sword hanger" and is composed of M42, θ and ι Orionis from north to south. To the north is the open star cluster NGC  1981.

The star Meissa (λ Orionis), which marks Orion's head, is in the open star cluster Cr 69 .

About half a degree south of the left belt star Alnitak is the famous Horsehead Nebula B  33, a dark cloud clearly visible in front of the emission nebula IC  434.

In Orion there is also the emission nebula Barnard's Loop , which stretches around the belt stars in a wide arc of about 12 ° in diameter from the north and extends to near Rigel in the south . 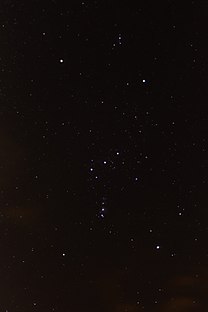 The main stars in the southern winter starry sky 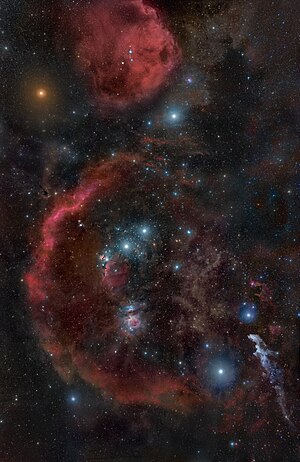 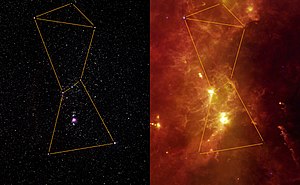 Orion in the visible and in the infrared spectral range

Orion: The spectral classes can be recognized by the different colors of the star trails. (Photo: exposure time approx. 600 s, on Agfacolor L UT 18, Karlsruhe)

Because of its conspicuousness, various meanings were ascribed to the constellation by peoples of ancient times:

The Sumerians saw it as a sheep . With them, Betelgeuse, which is sometimes translated from Arabic as "armpit", was the "armpit of the sheep".

The Egyptians saw it as a reflection of their god Osiris .

The ancient Greeks identified the constellation with the great hunter Orion . Orion is mentioned in Horace 's Odes , Homer's Odyssey and Iliad, and in Virgil's Aeneid .
The name of the constellation may be older than Greek mythology itself. It is sometimes assumed that the name is derived from the Akkadian Uru-anna , "light of the sky", and was later adopted by the Greeks . It is also believed that the Greeks adopted the heroic figure from the Sumerian- Babylonian epic about Gilgamesh , the mythical king of Uruk .

The Teutons recognized a plow in the constellation .

The Vikings often found the interpretation of the god Thor , who wades through a river and pulls the god Loki over, hanging on his belt.

In ancient China , the constellation was one of the 28 “residences” ( Chinese  宿 , Pinyin xìu ) in the Chinese star constellations . It is referred to as Shen 參 , which means "three" and probably comes from the three belt stars.

For the islanders of the South Seas , the constellation represented a war boat or a butterfly.

In the Coelum Stellatum Christianum by Julius Schiller it is called Saint Joseph.

There are different versions of Orion's life and work in Greek mythology :

He is said to have been the son of the sea god Poseidon , who freed the island of Chios from wild animals. However, when he raped Merope , the daughter of King Oenopion , he was blinded by her father as a punishment . Orion walked blindly to the east to be healed by the rays of the morning sun. Eos , the goddess of the dawn, fell in love with him instantly. The chaste goddess of the hunt, Artemis, grudged the young man and shot him with an arrow. Orion and the Pleiades were immortalized in the sky, the latter as "seven stars".

According to another version, Artemis wanted to renounce her vow of chastity out of love for Orion. Her twin brother Apollon , who wanted to prevent this, used a trick. He persuaded Artemis to practice archery and aim for the ocean waves while Orion swam there. Orion was fatally struck by an arrow. The grieving Artemis took her lover to heaven.

In another narration, Orion boasted that he was the greatest hunter in the world, which Zeus ' wife Hera resented. She sent out a scorpion that stabbed Orion fatally. God Zeus then transfers both of them to heaven. When the constellation of Scorpio rises in the east, Orion must leave the sky in the west. As a result, the two opponents are never together in the sky.

Bellatrix (γ Orionis), the third brightest star in Orion, is a reddish shining star 243 light years away. It has 4,000 times the luminosity of our sun . The name Bellatrix is Latin and means "warrior".

ε Orionis, the middle of the belt stars, is a bluish-white supergiant 1,340 light-years away. The name Alnilam is of old Arabic origin and means “string of pearls”.

The three belt stars of Orion . Flame Nebula and Horsehead Nebula (bottom left) can only be clearly observed photographically

Rigel (β Orionis) is the seventh brightest star in the night sky despite its distance of 770 light years. It is a binary star system . The main star is a blue giant with 17 times the mass, 60 times the diameter and 40,000 times the luminosity of our sun . This makes it one of the most luminous stars in our Milky Way . In the telescope a companion star of 6th magnitude is visible. The observation is not very easy, because the 0.1 m bright main star outshines the companion. The main star pulsates slightly, changing its brightness by 0.03 to 0.3 meters over a period of about 25 days . The old Arabic name Rigel is derived from "the left foot".

Theta 1 Orionis is a part of a star cluster, also known as a trapezoid (asterism). The Washington Visual Double Star Catalog has 42 entries, 18 of which are double stars.

ζ Orionis, the left belt star, is a triple star 817 light years away. A companion star of the 4th magnitude can already be observed with a small telescope.
The Arabic name Alnitak means "belt".

δ Orionis, the right belt star, is also a triple star. The system is 916 light years away. A companion star with a brightness of 6.9 m becomes visible in the telescope . The 2.2 m bright main star still has a close companion, which can only be detected spectroscopically .

σ Orionis is even a fivefold star . Around the spectroscopic double star (small companion 0.3 "apart), C, D and E are currently 11 to 43" apart.

Omikron Orionis is an optical (only apparent) double star. Around 1895 it was assumed from anomalies in the line spectrum of o 2 that it could be multiple. However, recent measurements have not confirmed this.

Betelgeuse (α Orionis) is a red supergiant about 640 light years away. It has about 15 times the mass and 630 times the diameter of the sun. If the star were in the center of the solar system , it would protrude beyond the orbit of Mars . Betelgeuse is a single star. However, there are indications that it might have incorporated a companion star about one solar mass when it expanded into a red giant about 100,000 years ago. It is a variable star , the brightness of which changes significantly over a period of about 6 years and is usually lower than that of Rigel (β Ori). At the end of 2019 Betelgeuse even passed through a century minimum weaker than 1.7 mag , possibly triggered by extensive star spots . The star has reached the end of its evolution and is expected to explode as a Type II supernova within the next 100,000 years .

The name comes from the Arabic يد الجوزاء, DMG yad al-ǧauzāʾ ("hand of the [constellation] twin", "hand of the giantess"). It already appears in the book of the constellations of the fixed stars by the Arab astronomer Abd ar-Rahman as-Sufi († 986).

The current German name form arose because the Arabic first letter Ya (يـwith two dots) incorrectly as Ba (بـwith a dot) and thus transcribed into Latin . During the entire Renaissance period the star was called Bait al-Jschauza , with the meaning assumed in the Arabic original as "armpit of the giantess", although the correct translation of "armpit"ابط, DMG Ibṭ would have been. This is where the name Betelgeuse came from .

M 42 and M 43, the Orion Nebula 1400 light years away , is one of the most beautiful observation objects in the night sky. Even in binoculars it can be seen as a foggy structure. The four brightest trapezoidal stars in the nebula can be observed in a small telescope. Six stars are visible in a telescope with an aperture of 10 cm or more. The stars stimulate the surrounding gas clouds to glow, which reveal fascinating details in the telescope.

Another well-known object is a cloud of dust that appears in front of the emission nebula IC 434 and is called the Horsehead Nebula because of its shape . Although the cloud is large, observing it is difficult, even with large telescopes, due to the low surface brightness. Long exposure photographs show details.