Size comparison between a typical blue giant and the sun 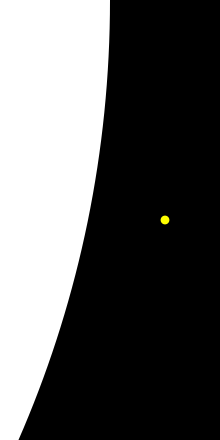 The estimates of Deneb's radius are between 200 and 300 times that of the Sun. This picture shows the approximate size of Deneb compared to the sun (right).

A blue giant is a giant star belonging to the spectral class  O or B with 10 to 50 times the mass of the sun . The luminosity of blue giants is higher than that of the main sequence stars .

While a red giant only reaches its size in the final stage of its stellar evolution and expands many times over, a blue giant already reaches this size in the normal stage of development. The high mass leads to a high density, high pressure and high temperature of the matter inside the star. This results in a high nuclear reaction rate compared to stars with lower mass . The resulting release of energy causes a surface temperature that, at up to 30,000 to 40,000  K, is significantly higher than that of the sun at around 5750 K. Due to this high temperature, the emission maximum (according to Wien's law for a black body ) is in the ultraviolet part of the light spectrum , which explains the blue color impression of these stars and thus their name.

The absolute visual magnitude M V reaches −9.5 and is in the same order of magnitude as the integral magnitude of globular clusters and some dwarf galaxies . The absolute brightness can be determined with an accuracy of 25% by means of a wind pulse-luminosity relation . These stars are thus brighter distance indicators than the classic Cepheids due to the period-luminosity relationship .

In contrast to the numerous existing lesser-mass stars that have a lifespan of several billion years, e.g. B. the sun with about 10 billion years, blue giants go through their hydrogen burning phase due to the high reaction rate in only a few tens of millions of years. Then they expand into a red supergiant and end up in a Type II supernova .

The evolution of blue giants of the spectral type O is strongly influenced by the presence of a companion in a binary star system . In 70% of the O stars, companions with orbital periods of less than 1500 days were found. These double stars exchange matter and angular momentum during or shortly after the main sequence phase . 20 to 30% of all massive stars in binary stars will merge within a few million years. 50% of all O stars either lose their hydrogen-rich atmosphere and develop into Wolf-Rayet stars , for example, or gain substantial amounts of matter from their companion.

X-rays are often emitted by blue giants and supergiants and are related to the stellar winds of these hot stars. The stellar winds are driven radiatively and are a result of the radiation pressure . The interaction cross-section is usually higher for heavy elements and therefore these elements are accelerated more strongly. The kinetic energy is evenly distributed by shocks in the stellar wind, whereby speeds of a few thousand kilometers per second are achieved. The wind density depends on the chemical composition of the blue giant's atmosphere and can reach up to 10 −3 solar masses per year for Wolf-Rayet stars . X-rays are generated as bremsstrahlung when the stellar wind interacts with interstellar matter , shock waves in the stellar wind near the star's surface or when stellar winds collide in binary star systems.

Blue giants and supergiants are components in high mass X-ray binary stars . The stellar wind of the blue giant is accreted by a black hole , a neutron star or, very rarely, a white dwarf . When falling, the matter is accelerated by the gravitational field of the compact star and generates a shock wave in front of the surface, in which the matter is abruptly decelerated. In contrast to the X-ray radiation from pure wind interaction, which is soft, the X-ray radiation from X-ray binary stars is significantly more energetic (harder). In addition to bremsstrahlung, bursts also occur when the hydrogen or helium-rich matter on the surface of the compact star reaches a density at which an unchecked thermonuclear reaction begins.

The X-ray binary stars, which consist of a Be star and a compact companion, can not be traced back to stellar winds . Due to the high speed of rotation and possibly pulsations, a disk of gas that has flowed off the surface forms in the plane of rotation around the Be star. When the compact star passes through the disk, it collects matter and the X-ray brightness fluctuates with the orbital period of the binary star system.

While all of these stellar classes are within the instability streaks, there appear to be a small group of early B supergiants found just outside the known instability streaks whose line profiles are variable with periods of less than two hours. This is mostly interpreted as a non-radial oscillation, since these periods are too short for a rotation modulation.

Contrary to original expectations, blue giants also explode directly as a core collapse supernova . The best-known example is the supernova 1987A , whose precursor star was cataloged as a B supergiant named Sanduleak −69 ° 202 and has not been detectable since the explosion. In addition to a part of the type II supernova, whose atmosphere is hydrogen-rich at the time of the supernova explosion, the type Ib and Ic supernovae also have blue supergiants as precursors. Due to strong stellar winds, they have already lost large parts of their atmosphere to the interstellar medium , so hydrogen can no longer be detected in the spectra of these supernovae.

Blue giants are the stars with the largest observed masses of up to 250 solar masses such as B. with the supergiant R136a1 . The upper mass limit should be reached when the radiation pressure is in equilibrium with the pressure of the gravitational force. However, this Eddington limit is only 60 solar masses. Many blue giants have significantly higher masses, as convective energy transport predominates in their core and consequently an equilibrium is possible up to masses of 150 solar masses. This upper mass limit depends on the metallicity and applies to protostars during star formation. The high radiation pressure leads to a fast stellar wind , which leads to a loss of mass of around half the original mass within 10 million years. Even larger stellar masses of up to 250 solar masses can only arise through the merging of two massive stars in a binary star system. The star densities required for these mergers are only available in young star clusters such as in R136 or the Arches star cluster .

Blue giants are also relatively rare due to their short lifespan.