The Hertzsprung-Russell diagram , or HRD for short , roughly shows the evolutionary distribution of the stars . It was developed in 1913 by Henry Norris Russell and builds on the work of Ejnar Hertzsprung . If the spectral type is plotted against the absolute brightness for this purpose , characteristic line-like accumulations result with a sufficient number of entries.

Above the main row is the giant branch with stars of luminosity class III.

In the area of ​​the spectral classes A5 to G0, to the left above the main sequence, there is the so-called Hertzsprung gap (not shown in the illustration), an area with noticeably few stars. It can be explained by the fact that massive stars only need a very short time to develop into giants and thus rise relatively quickly in the giant branch. Therefore, the area of ​​the Hertzsprung gap appears relatively empty. 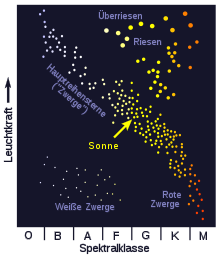 Simplified representation of a Hertzsprung-Russell diagram

The concentration of the stars in the various groups can be explained from the theory of stellar evolution . The developmental states of the stars are more or less clearly delimited from one another and can be found at very specific points in the HRD. In the course of time, the two parameters of the effective temperature and the luminosity of a star change depending on the nuclear processes in its interior, so that each star goes through a certain evolutionary path through the HRD. This happens at different speeds. Developmental states that persist for a long time are accordingly observed more frequently (e.g. in the main sequence) than rapid, only brief development stages (e.g. in the area of ​​the Hertzsprung gap). Beyond effective temperatures of about 3000-5000 Kelvin there are no more stars in the HRD, because this is where the protostars are located, which have a very high development rate. This nearly vertical “line” is called the Hayashi line . Since the spectral type is roughly related to the temperature of the star, the HRD can be viewed as a temperature-luminosity diagram. Instead of the spectral type, you can also plot the color index of the stars, which is also a measure of their temperature. Instead of the HRD, the color-brightness diagram is obtained.