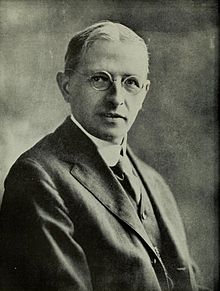 Around 1910 Russell and Ejnar Hertzsprung developed the Hertzsprung-Russell diagram .

In 1922 Russell introduced a constellation system using a three-letter abbreviation of the Latin name of the constellation.

Together with Frederick Albert Saunders (1875-1963), he described the Russell-Saunders coupling in 1925 (see spin-orbit coupling , Hund's rules ).

Together with Raymond Smith Dugan and John Quincy Stewart , he wrote a two-volume textbook, the second volume of which spread the idea of ​​stellar state quantities, see Vogt-Russell theorem .

In 1929 Russell confirmed Cecilia Payne's discovery in 1925 that the sun consists for the most part of hydrogen and helium , and determined the mass ratio to be 3: 1. Thereupon the Russian-North American physicist George Gamow expressed the assumption that the sun's energy source was to be found in the fusion of four hydrogen nuclei to form one helium nucleus and called the process nuclear fusion or hydrogen fusion ( hydrogen burning ). Gamow's guess later turned out to be correct.

The American Astronomical Society created the annual Henry Norris Russell Lectureship in his honor. Russell received this in 1946. The asteroid (1762) Russell is named after him. The crater of the moon Russell has been named after him and the astronomer John Russell since 1936 .