Artist's impression of the constellation Pisces

The Pisces ( Latin Pisces , astronomical sign: ♓) are a constellation of the ecliptic . 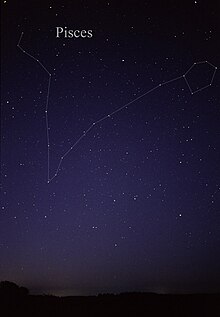 The Pisces constellation as seen with the naked eye

The ecliptic crosses the celestial equator in Pisces. This crossing point, the vernal equinox , is the origin of the most important astronomical coordinate systems in the starry sky . The time at which the sun crosses the celestial equator corresponds to the astronomical beginning of spring in the northern hemisphere . In the year 2597, assuming today's constellation borders, this point will move into the constellation Aquarius.

The fish belong to the 48 constellations of ancient Greek astronomy , which were already described by Ptolemy . The constellation gave its name to the astrological sign of Pisces . However, due to the precession motion of the earth's axis , the passage of the sun has changed compared to ancient times .

In the year 7 BC In Pisces there was a rare triple conjunction between Jupiter and Saturn ( greatest conjunction ). That is, the two planets met three times in the course of a year. Conjunctions between Jupiter and Saturn occur around every 20 years, but very few are three times with such a small angular distance that both look almost like a single star. This can only be seen every 854 years and thus represented a millennium event for Babylonian astronomers. At that time the planets Jupiter with Saturn and later Venus with Mars could all be observed in a row in the constellation Pisces (Pisces). These two facts gave rise to hypotheses that the Jupiter-Saturn conjunction went down in history and Christian belief as the star of Bethlehem . In ancient times, images of fish were also a secret identification mark among Christians. To this day, however, the actual facts have not been clarified, and purely symbolic interpretations or comets have also been suggested as the basis of the Epiphany story.

The Babylonians associated the constellation with the goddess of love Ishtar .

The ancient Greeks apparently adopted this interpretation later. In their mythology , the fish represent the goddess of love Aphrodite and her son Eros who, fleeing from the monster Typhon , jumped into the Euphrates , turned into fish and escaped.

The Romans often referred to the fish as Imbrifer Duo Pisces , the two rain-bringing fish, or also as Gemini Pisces and Piscis Gemellus , i.e. as a pair of fish.

The brightest star in Pisces is Eta Piscium , also called Kullat Nunu . It is a yellow shining giant star 294 light years away with four times the mass, 25 times the diameter and 300 times the luminosity of our sun.

Beta Piscium is a bluish star of the spectral class B6 V, 493 light years away. The name Fum al Samakah is of Arabic origin and means something like "mouth of the fish".

47 Piscium is a semi-regular variable 400 light-years away that changes its brightness over a period of about 50 to 85 days. It is a reddish star belonging to the spectral class M3 III.

19 Piscium is a red giant of the spectral class C5 II at a distance of 2000 light years. It is 700 times the diameter of our sun and is one of the largest known stars. Its brightness changes without any noticeable regularity.

Several galaxies are visible in Pisces. The French astronomer and comet hunter Charles Messier included one in his catalog of foggy objects ( Messier catalog ).

M 74 is a galaxy about 30 million light years away. It is found west of the bright star Eta Piscium . It is not easy to observe and appears as a very diffuse, misty spot in prism binoculars under favorable conditions . Spiral structures can only be seen in large telescopes.