The crane ( Latin Grus ) is a constellation of the southern sky. 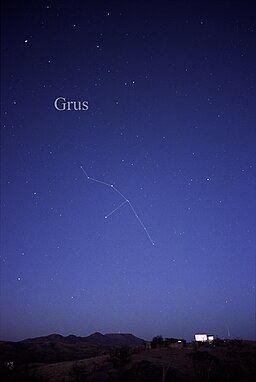 The constellation of Grus as seen with the naked eye

The crane has roughly the shape of an inverted Y. Two of its stars, α and β Gruis, are strikingly bright and have a clear color contrast. α Gruis glows bluish white, while β Gruis glows orange.

From Germany, on very clear autumn nights, at most the northernmost part of the crane with the star γ Gruis can be seen. It is fully visible only south of the 35th parallel .

Originally, the stars were assigned to the southern fish constellation .

At the end of the 16th century, the Dutch navigators and explorers Pieter Dirkszoon Keyser and Frederick de Houtman described the stars as an independent constellation Den Reygher ("the heron") crane . Petrus Plancius and Jodocus Hondius put him in 1598 respectively. 1600 as Phoenicopterus ("Phoenix"). Johann Bayer then took over the constellation under its current name in his 1603 celestial atlas Uranometria .

Alpha Gruis, the brightest star in the crane, is 101 light years away. The name Al Nair is of old Arabic origin and means "the enlightened one".

Gamma Gruis is a bluish shining star of the spectral class B8, 203 light years away . The Arabic name Al Dhanab means "tail".

The stars Delta 1  and Delta 2  Gruis, which are roughly equally bright in the night sky, appear to the naked eye as a double star system , as they are only 16.1 arc minutes apart. It is only an asterism , however, because the two stars are actually 150 and 450 light years away from Earth.

A “real” physical binary star system, whose components move around a common center of gravity , is πGruis 200 light years away. The system can be resolved into single stars with a smaller telescope .

There are several galaxies in the northeastern part of the crane . A telescope with an opening of at least 15 cm is required for observation.