The Wassermann ( latin Aquarius , ancient Egyptian giant ; astronomical ♒ mark) is a constellation of the ecliptic .

Aquarius is an expansive but inconspicuous constellation south of Pegasus . Only two of its stars appear brighter than the 3rd magnitude . The sun is in Aquarius from February 16 to March 21 of each year.

The radian of two annual swarms of shooting stars lies in this constellation: the May aquariids and the July aquariids . 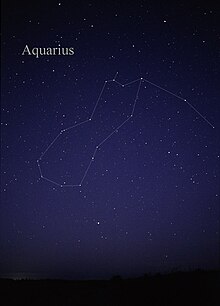 The Aquarius constellation as seen with the naked eye

Although Aquarius is not a noticeable constellation, it is counted among the oldest known constellations. For the ancients it must have had a great importance as a calendar symbol: When the sun moved into Aquarius, this marked the time of the rainy season, which is where the name might come from. Several constellations in the area - such as the fish , the whale , the southern fish and the dolphin - also have a connection to the water.

The zodiac sign Aquarius goes back to this constellation.

There are several interpretations of the mythological origin of the name.
On the one hand, the Aquarius is supposed to represent Deucalion , who survived the Flood and became the progenitor of the people. When Zeus wanted to wipe out sinful mankind, Deucalion built a boat with which he and his wife Pyrrha drifted on the water for nine days and nights until they landed on Mount Parnassus . Following an oracle , the two stones threw behind them, from which new people emerged.

According to other interpretations, Aquarius is said to be Kekrops I , the founder of Athens , or Ganymede , Zeus' cupbearer .

According to the controversial film Zeitgeist , the Bible passage Mk 14,12-16  EU is supposed to refer to Aquarius and symbolize the migration of the vernal equinox into the constellation. There it says:

“And on the first day of the Feast of Unleavened Bread, when the Passover lamb was slaughtered, his disciples said to him: Where do you want us to go and prepare so that you can eat the Passover? And he sends two of his disciples and says to them: Go into the city and you will meet a person who carries a jug of water. Follow him! [...] "

See also list of stars in the constellation Aquarius

Beta Aquarii is the brightest star in Aquarius with an apparent magnitude of 2.90 m . It is a supergiant of the spectral class G0 Ib about 610 light years away. The name Sadalsuud is of Arabic origin and means something like "the happiness of happiness".

The second brightest star, Alpha Aquarii ( Sadalmelik , Arabic for "the king's luck") is a supergiant of the spectral class G2 Ib, 760 light years away. It has 80 times the diameter and 6,000 times the luminosity of our sun .

Gamma Aquarii ( Sadachbia , Arabic for "the happiness of the tents") is 158 light years away.

Delta Aquarii is a 160 light-years distant star belonging to the spectral class A3 V. The origin of its name Skat is usually called "leg". Originally it could also have meant “wish”.

ζ Aqr is a binary star system 105 light years away. Two stars of roughly the same size circle around a common center of gravity, which takes them around 800 years. The system can be resolved into two white, roughly equally bright stars in a small telescope .

R Aquarii is a symbiotic star 1,000 light years away, with the brighter component also being a Mira star. The star changes its brightness over a period of 387 days, with periodic fluctuations occurring in a rhythm of 24 years. At its maximum, the star is 5.2 m bright and can barely be seen with the naked eye. At a minimum, it only achieves a brightness of 12.4 m . To find it you need a larger telescope.

In Aquarius there are three objects that the French astronomer and comet hunter Charles Messier included in his catalog of foggy objects ( Messier catalog ).

M2 is a globular cluster about 50,000 light years away. Even in binoculars it can be seen as a misty spot. In order to resolve it into single stars at the edge, however, you need a telescope.

The planetary nebula NGC 7009 , also known as the Saturn Nebula , is around 3000 light years away . With its elliptical shape it is somewhat reminiscent of the ring planet Saturn when observed in the telescope at low magnification.

In the southern part you can find the Helix Nebula . This is a planetary nebula 500 light years away. With a diameter of 13 arc minutes and a brightness of 7 m , it is the largest and brightest planetary nebula in the night sky. On a dark night you can see it in binoculars as a round, misty spot. To see structures, however, you need a telescope.