The title of this article is ambiguous. Further meanings are listed under Hair (disambiguation) . 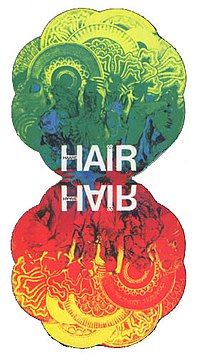 Hair (subtitled The American Tribal Love / Rock Musical ) is an American musical that is considered a milestone in pop culture in the late 1960s. At the center of the plot is a group of the hippie movement. The book and lyrics are by Gerome Ragni and James Rado , the music is by Galt MacDermot . After an off-Broadway preview in October 1967 in Joseph Papp's Public Theater, production began in April 1968 with the world premiere on Broadway.

Hair is considered to be one of the most successful musicals of all and was subsequently performed in numerous other countries. Premiere of the adapted for Germany in the German language version hair was on 24 October 1968 in Munich. Hair was filmed in 1979 by Miloš Forman .

Gerome Ragni and James Rado wrote “Hair” as a lyrical theater text. They met as actors on Broadway. Ragni played in " Hamlet ", Rado in "Luther". Dealing with the provocation of modern theater and with the development of the American hippie movement challenged her to a creative documentation. This is how the lyrics for “Hair” came about.

“Pointy fingers, sun sauce, silver paper, a bed feather storm or gray-blue uniforms. Hell, we don't want to go on like this. I don't want to let my steel helmet do my hair. "

- Rado / Ragni : from the German programs

Ragni and Rado formulated the unrest of the younger generation : screams of protest and provocative action , mystical flight from reality and philosophical speculation. The harshness of some texts contrasts with passages of delicate poetry . The contradiction in form makes the tension of the content clear. The result was a material that demands the reader or listener and sometimes even scares them. So it was consistent to reshape this vital text musically and theatrically and to stretch it into the discipline of the stage .

In 1968 Michael Butler , the so-called " hippie millionaire", brought the musical from off-Broadway to Broadway . Before the approximately 100 off-Broadway performances were followed by more than 1,800 performances at the Biltmore Theater on Broadway, Tom O'Horgan made some changes. For example, the original version did not contain the nude scenes that caused a sensation in the Broadway production, but did contain a scene in which the stage is stormed by police officers trying to prevent the performance.

The success of this piece could not be stopped: after Stockholm and London, the triumphal march through Germany began on October 24, 1968 in Munich. The public prosecutor intervened in the German performances when a 15-year-old boy exposed himself on the stage.

Former organist and church musician Galt MacDermot wrote the music. He described that he was learning rhythmically in South Africa in the early 1960s; he describes this phase as one of his most important. Hence the fact that almost all the melodies in Hair are actually church-tonal ( Doric , Aeolian , Lydian ), as is the simplicity and the catchiness of the songs. If one only looks at the melodies without harmonies, they are strongly reminiscent of Gregorian chants . The music became so successful through the harmonization, rhythmization and instrumentation. Galt MacDermot was an accomplished and well-known composer in 1966. He said that he made the compositions within three weeks. Published Galt MacDermot titled "DisinHAIRited" about 20 texts and songs that were not included in the musical later (a pun on the homophone disinherited , dt. Disinherited ).

Bertrand Castelli , who had to go to jail several times as the leader of peace marches, was appointed as director. He implemented the radical pacifist philosophy of the musical and staged it in eleven countries.

Hair originated and plays in the late 1960s. The United States waged the Vietnam War and around 500,000 young Americans were deployed there at the time. Most of the soldiers were conscripts; general conscription in the USA was not abolished until 1973. In response to the brutality and victims of the war, a large protest movement developed. There were numerous demonstrations and symbolic actions, for example the burning of draft letters or the awards received in Vietnam. About 50,000 American conscientious objectors evaded conscription and fled to Canada.

The protest against the war coincided with demands for changes in the societal structures that are viewed as “authoritarian” and with the emergence of the African-American civil rights movement . In April 1967 400,000 people demonstrated in New York, in August 1963 the "March on Washington" took place, in which 100,000 people took part, above all u. a. also the director of Hair, Bertrand Castelli , who had to go to prison for it. In front of the Lincoln Memorial , Martin Luther King , a symbol of the civil rights movement and opponent of war, called for a society free from racism and violence.

The protests were not confined to the United States; Student unrest broke out in many industrialized nations in the western world . The so-called May riots , which were initially triggered after student protests in May 1968 by the evacuation of a faculty at the Sorbonne University in Paris, led to a week-long general strike that paralyzed all of France. The German student movement of the 1960s was a multifaceted political movement that criticized and fought against the “prevailing conditions” in the Federal Republic.

“All over the world, youth had become restless. Demonstrations, go-in, hippie movement, provocation - protest symptoms of a troubled transition period. HAIR offers concrete approaches to analysis in an artistically condensed form - music, text and movement merge, making contradictions clear. HAIR gives an artistic answer to the question of the meaning of youth unrest. "

Long hair of young men as well as “dirty” clothes, such as torn blue jeans and “grandpa fashion” with vests, were popular symbols for a protest attitude towards the “ establishment ” at the time. The response from parts of society has been to curse "long-haired" people as idlers and bums . Hair describes the feelings of many young people during this time, but especially those of the so-called "hippie culture". The “hippies” - called “flower children” in the German program booklet - were not stray children, but rather young people influenced by the student revolts, mainly from the middle class: students, schoolchildren, but also “freaky people”.

In the later film it is a "street gang" in New York without reference to the worldwide student revolts. The protest against society as a whole cannot always be separated from the youthful, ambivalent attitude towards cutting the cord from the parental home: “ My hair like Jesus wore it, Hallelujah, I adore it. Hallelujah; Mary loved her son. Why! Don't my mother love me? "(German:" My hair as Jesus wore it, Hallelujah, I adore it. Hallelujah; Maria loved her son. Why (!) My mother doesn't love me? "), In the original German version:" Went around two thousand years ago Jesus did not have long hair, and Mary loved her son - only my mother hates me ”.

Hair tells the story of a group of anti-establishment long-haired (hence the name of the musical) hippies who live and love in the city of New York and who oppose being drafted as soldiers for the Vietnam War. Claude Hooper Bukowski, who recently arrived from the country, the young wife Sheila and her charismatic roommate Berger live in a love triangle with relish, but aimlessly into the day.

Torn between the patriotic impulses of his bourgeois origins and the pacifist ideals that have grown stronger in the circle of his new friends, Claude gets into an inner conflict, because when the conscription arrives he has to decide whether he - like the others - will refuse military service (and with it an impending prison sentence and social ostracism) or disregarding his pacifist ideals, submitting himself to military authority, killing people and risking his life in Vietnam.

The contents of the various stage representations and the filming differ considerably.

In texts, songs, dance scenes and sketches, the hippies' attitude to life and their resistance to the prevailing conditions are portrayed, such as B. react to war , violence and social hierarchies. The opening song contains the romantic expectation and hope for a new age, the so-called Aquarian Age . In addition, the musical deals with the question of the meaning of life, the conflict with the parents' generation , racism , the worldwide student revolution and the escape into dreams through drugs.

The positive visions ultimately end in a nightmare in which the horrors of war are illustrated. A radical pacifism becomes clear in songs, skits, dances and almost cabaret hallucination scenes, all of which burn their military passports in public. The demand for a new attitude towards life, the protest against the traditional hierarchies and the generation conflict are just as clear.

In the film, depictions of war victims are shown on a video screen (there was no video screen in 1966/67). The film also shows the transformation of the brightly dressed hippies into uniformed soldiers and how they kill on their own accord or on their own initiative. In the musical this is a sketch (“killing scene”). In the film, environmentally critical songs were removed, Claude was no longer bisexual. At the end of the film, opponent Berger travels to the military office of his friend Claude. Due to a mix-up, Berger takes Claudes' place. He is transferred to Vietnam by plane and dies there in the war.

After the end of the Vietnam War, in the USA and in Germany, scenes and songs were exchanged with previously unpublished songs and texts from Galt MacDermot's “Disin-HAIR-ited”. The focus was now on social criticism, American and worldwide racism (black and white), sexual liberation, a new attitude towards life and still a radical pacifism .

Most of the musicals at that time had significantly fewer songs than Hair, which had over 30 titles.

The independent success of the music from the musical consists largely of the chart positions of the group The Fifth Dimension , in particular the medley Aquarius / Let the Sunshine In .

Entry ticket to the performance in Hamburg

Hair performed off-Broadway in the United States from 1967 and on Broadway from 1968 to 1972 non-stop. The musical was also successful worldwide.

In Germany (as well as in Great Britain), Hair was the most successful musical of its time before Jesus Christ Superstar . The German version “ Hair ” ran for 2½ years and was a success in all German-speaking countries. There were performances in Munich, Dusseldorf, Berlin, Hamburg, Boeblingen, Frankfurt, Nuremberg, Cologne, Essen, Duisburg, Vienna, Zurich etc. and finally Ulm.

Performers from the Hamburg production at a presentation in Kiel's Holstenstrasse , 1969

In the German performances, the role of Sheila was played by Su Kramer or Freya Weghofer , who later took on the role of Jeanie . Next came Reiner Schöne as Berger , Ron Williams as Hud , Bernd Raedicke as Claude , later by Jürgen Marcus played, as well as Donna Summer and Liz Mitchell as Donna on.

Most of the lyrics were translated verbatim by Ulf von Mechow, Karlheinz Freynik and Walter Brandin , but some of them were adapted to the European (e.g. in Amsterdam, London and Stockholm) or German circumstances and mentalities and the German language. The German scenes and dream images are not in all parts direct translations, but the content is based on the English models. Some of them were even brought up spontaneously on a daily basis in an almost cabaret-like manner, such as B. the general scene ( Peter Kern ), which mocks the hierarchical structures of society. In the father-mother scene, recognition of the youth (“I have no money ...”), critical allusions to the media and advertising (“HB male”, “Mainzel male”, “tourist lady” and others), “ patriotic journeymen ” (the CDU has described the SPD as “journeymen without a fatherland”). There were also local allusions such as “Come on, we're going to scare the Ku'damm Wessis …” and many others. In this respect, Hair was less of a musical with a continuous plot (as in the film) than more of a rock cabaret with successive songs and scenes with no particular location. This is one of the reasons for the success of the three German-speaking ensembles.