The theorem of rays (one also speaks of the first, second and third theorem of rays) or the theorem of four lines is one of the most important statements in elementary geometry . It deals with route conditions and makes it possible to calculate unknown route lengths for many geometric considerations.

Formulation of the theorems of rays

If two or three straight lines running through a point ( vertex ) are intersected by two parallels that do not go through the vertex, then the following statements apply:

The two sketches take into account that the intersection point Z can lie outside or inside the two parallel straight lines. In the first case one speaks occasionally of a "V-figure" (left sketch), in the second of an "X-figure" (right sketch). 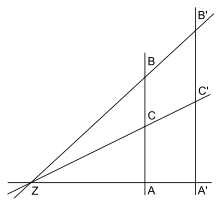 Sketch according to sentence 3

For checking ratio equations.
The length specifications for the arrows count from Z.

Remark (inversion of the ray law):

If property 1 is fulfilled, one can infer parallel straight lines. If, on the other hand, property 2 is given, a corresponding conclusion that parallelism is not possible.

The name ray theorem is explained by the fact that one often only considers the special case in which the two parallels lie on the same side of the vertex ("V-figure"). Because then you do not need two straight lines intersecting at a vertex, but only two rays with a common origin.

The theorem of rays is closely related to the concept of geometric similarity . The triangles and are in each of the three sketches, as well , and similarly in the diagram according to sentence 3 (in "formulation of the beams sets") to each other. This means in particular that the corresponding aspect ratios in these triangles coincide - a statement from which the theorem of rays results directly.

There is a similarly close relationship with vector calculus . The calculation rule

for two vectors and a real scalar is just another way of expressing the ray theorem, because it then applies:

Here is the length ( Euclidean norm ) of the vector

In the relation equation of the ray theorem, three (known) quantities determine the (possibly unknown) fourth quantity. This can be used in the measurement of inaccessible, not directly measurable distances by choosing the not directly measurable distance as the (unknown) fourth variable in a ray set configuration. Simple measuring devices based on this principle are the Jacob's staff and the forester's triangle . The jump of the thumb to estimate distances is also based on this principle.

Height of the Great Pyramid

A simple example for the application of the theorem of rays should go back to the ancient Greek philosopher and mathematician Thales of Miletus . With the help of a stick, he determined the height of the Egyptian Great Pyramid by measuring the length of the shadow . In other languages, the ray theorem is therefore often referred to as the Thales theorem.

The following example calculation determines the height of the Great Pyramid with the help of the second theorem of rays, but it probably does not correspond to the exact calculation of the valley itself:

First you determine the side length of the pyramid and then the length of the shadow of the same. Then you stick a stick vertically in the ground and measure its height and shadow length. The following values ​​are then obtained:

With the help of the ray theorem (sketch 2) the following equation is set up: 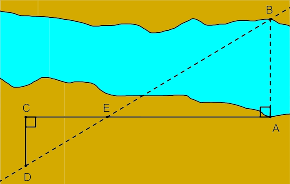 The theorem of rays can also be used in land surveying to determine the length of difficult-to-access stretches, such as the distance to opposite banks of bodies of water. The width of a river (see graphic on the right) can be determined as follows. First mark the end points A and B of the line to be determined, then construct an AC at right angles to AB. Such a construction can be carried out, for example, with the aid of a turnstile, corner mirror or double pentagon prism . On AC you choose an (arbitrary) point E from which you aim for point B on the other bank and then extend the distance EB beyond E in the opposite direction. Then at point C you construct a line at right angles to AC, which intersects the extension of EB at point D. Since the stretches AE, CE and CD are all on the same bank, they can be easily measured and the second set of rays then provides the river width you are looking for:

Division of a route

The first theorem of rays makes it possible to divide a segment in an (integer) ratio ( ) with a simple method - without calculations or measurements . At a given distance AB to draw a beam with a starting point in A a. Then, starting at A m + n , one cuts off successive stretches of equal length on the beam . The end point of the m + n th line is connected to B and then the parallel to this line is drawn through the end point of the m th line. This parallel divides the segment AB in the desired ratio .

The route relationships set out in sentence 1 can be derived for triangles of equal area in the line theorem figure. Sentences 2 and 3 as well as the reverse of sentence 1 then result from the application of sentence 1 or the sentences that have already been proven.

The perpendiculars from A 'and B' to the straight line have the same length, because it is parallel to . These perpendiculars are heights of the triangles ABB 'and ABA', which have the associated base side in common. For the areas, therefore, applies and further or area-united .

So then also applies:

If you dissolve both and set the right sides equal, the result is

or transformed for the route conditions on one beam each:

Apart from the proof given above, which goes back to a representation from Euclid's elements, shorter and more elegant proofs were possible in ancient Greece. It is enough to show the equality for one case of the possible relationships. The others follow immediately. Euclid himself only proves one case.

Here the proof is not quoted, but simply carried out according to Archimedes methodology:

With the usual side and angle designations for the triangles ABZ and A'B'Z according to the sketch above (for the formulation of the ray theorems ) it is shown that a: a '= b: b' applies. The angles and 'as well as and ' are the same as step angles . Denote the heights, which are given by the perpendicular from Z to the straight line, with h and h 'and their base points with H and H'. Since equal to 'the' remote 'cathetus and the hypotenuse is the same in the two right-angled triangles and AHZ A'H'Z relationship. (In 'modern' formulation: same opposite side from to hypotenuse) 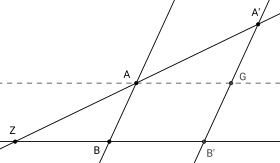 Construct an additional parallel to through A. This parallel intersects in G. Thus, according to construction and because of Theorem 1, the following also applies to the rays through A '

which can be replaced by:

So one has or switched too . 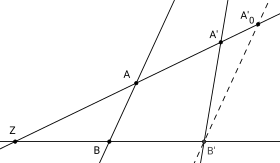 Suppose and would not be parallel. Then there is a parallel to that goes through the point and intersects the ray in (*). Since the assumption applies, it results

On the other hand, it is also true after the first ray law

This means that and both lie on the beam and are equidistant from . With that, however, the two points are identical, that is . This is a contradiction to the fact that the condition (*) should be about 2 different points. So the assumption of non-parallelism leads to a contradiction and therefore cannot be correct; Or to put it another way: It must apply.