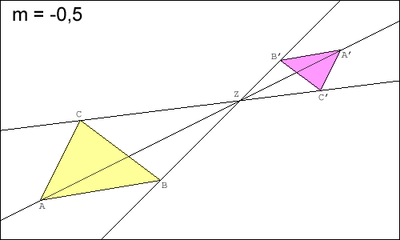 In geometry, a centric stretching is an image that enlarges or reduces all lines in a certain, given ratio , the image lines being parallel to the original lines . Centric stretches are special similarity maps .

The two sketches show the application of two centric stretchings (with and ) to a triangle ABC each .

For the identical mapping (identity) results for a point reflection . The case is not allowed, since otherwise all points would have the same image point, namely the center.

In the last two cases mentioned, one can generally speak of neither angle nor aspect ratio, since neither an angle nor a length need to exist. Here, too, the centric extensions always belong to the dilatations and the affinities, and the same applies to fixed points and fixed lines as in the real case.