The title of this article is ambiguous. For the British painter, see William Huggins (painter) . 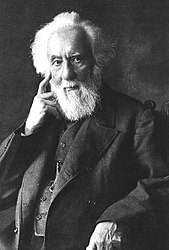 Sir William Huggins (born February 7, 1824 in London , England , † May 12, 1910 ibid) was a British astronomer and physicist . He was one of the first to apply spectral analysis to celestial bodies.

In 1856 he set up a private observatory near London and built a spectroscope for his 20 cm lens telescope . When Gustav Kirchhoff and Robert Bunsen discovered in 1859 that the Fraunhofer lines in the solar spectrum are caused by chemical elements, Huggins and his wife Margaret Lindsay Huggins began to systematically observe the color spectra of stars and nebulae. His thorough investigation of emission and absorption lines made him - like Angelo Secchi  , who was also researching in Rome - a pioneer of spectral analysis .

In his diary, Huggins wrote about his motivation for entering this new territory when he heard of Kirchhoff's great discovery:

“This news filled me with great joy, as it may be felt by a thirsty wanderer who finds a well in the desert. Now the field of activity had finally been found that I had been looking for in vain for so long: the expansion of new ideas from the sun to other objects in the sky. "

Huggins was the first astronomer who could distinguish between nebulae and galaxies (?) By observing the spectral lines . For this he examined the spectra of a number of chemical elements and published his results with images of the spectra (a novelty at the time) in the Philosophical Transactions . In 1863 he showed that the same chemical elements are visible in the star spectra as on Earth.

In 1864 he found previously unknown emission lines in some planetary nebulae and suggested a hypothetical chemical element called nebulium as their source . (It was not until 1927 that these lines were elucidated by Ira S. Bowen as prohibited excited emission lines of gases at extremely low density.)

In 1866, while observing a nova in the constellation Crown ( T Coronae Borealis ) , Huggins was able to determine that its outermost, expanding shell is made of hydrogen .

Finally, Huggins also researched the movement of stars using spectral analysis. He found a redshift in the spectrum of Sirius and correctly interpreted it as a Doppler effect . From this he concluded that the star must move away from us (positive radial velocity ).

He was in the Golders Green Crematorium in London cremated , where his ashes is located.

The moon crater Huggins , the Mars crater Huggins and the asteroid (2635) Huggins are named after the astronomer . In addition, Mount Huggins in Antarctica bears his name.