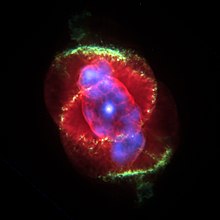 Nebulium (rarely Nebulum or Nephelium ) is the name for a hypothetical element postulated in the 19th century . The green emission lines in the spectrum of planetary nebulae and diffuse gas nebulae were assigned to him (see emission nebulae ).

William Huggins was the first to discover brightly shining lines with the wavelengths 3726, 3729, 4959 and 5007 Angstroms in the planetary nebula NGC 6543 ( Cat's Eye Nebula , Constellation Dragon) in 1864 . As a possible explanation for their presence, he suggested the existence of an element not yet found on Earth, the nebulium.

It was not until 1927 that Ira S. Bowen identified the alleged nebulium lines: These are so-called forbidden lines of (double) ionized oxygen , nitrogen , helium , neon and some other gases. These forbidden lines can only arise with the very low density of gas nebulas (comparable to a terrestrial high vacuum ). In the laboratory, under normal terrestrial conditions, these lines practically do not appear due to the very low transition probability and can therefore not be detected. For historical reasons, the lines are sometimes referred to as N1 and N2 to this day, but this has nothing to do with the element nitrogen.