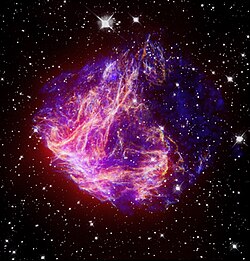 99% of the energy released by a supernova is emitted as neutrino radiation, which hardly interacts with matter; the remaining percent greatly accelerates the outer layers of the precursor star. The resulting supersonic shock wave made of stellar material propagates far into the interstellar medium at an almost constant speed of around 10,000 km / s and heats it up to 10 7 to 10 8  K. In this free expansion phase, which lasts about 200 years, the SNR reaches a size of about 10  light years . This is followed by a radiation phase lasting around 10,000 years.

Supernova remnants often have a shell structure, since further shock waves can be triggered by material falling on the compact remnant. These further outbreaks can occur centuries later.

Perhaps the most famous and closely watched remnant is Supernova 1987A , which came from a supernova in the Large Magellanic Cloud . Other well known supernova remnants are

In contrast, the Crab Nebula , the remnant of Supernova 1054 , is not actually a supernova remnant. So far it has not been possible to detect the envelope in the radio range that was ejected during the supernova outbreak. The Crab Nebula is a pulsar wind nebula in which the matter is torn out of the neutron star by electromagnetic forces and accelerated to almost the speed of light .