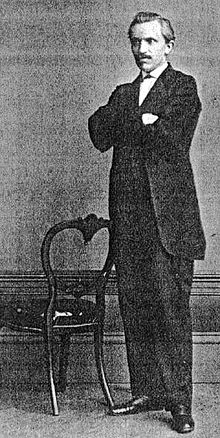 Albert Marth (born May 5, 1828 in Kolberg , Pomerania ; † August 5, 1897 in Heidelberg ) was a German astronomer . The focus of his work was the observation of planets, asteroids and galactic nebulae .

From 1855 to 1862 he succeeded George Rümker as assistant to Temple Chevallier at Durham Observatory , Potters Bank , England . Then William Lassell hired him as an observer at his private observatory in Malta . During the period from 1863 to 1865 Marth discovered around 600 foggy objects. He then had several small jobs and was mainly in London until 1883.

In 1882 he participated in the Venus Transit - expedition to the Cape Good Hope part. In 1883 Marth got a job at Colonel Edward Henry Cooper's Observatory at Markree Castle near Sligo / Ireland . Marth spent his last years in Germany. He died of cancer on August 5, 1897 in Heidelberg.

The lunar crater Marth and the Marth crater are named after him.