This article covers the city in Ireland. For the location in the USA, see Sligo (Pennsylvania) . 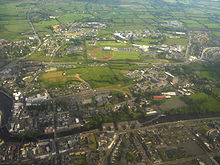 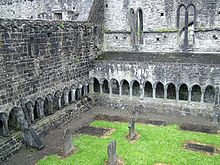 Cloister of the abbey

Sligo [ ˈslaɪɡoʊ ] ( Irish : Sligeach [ ˈɕlʲɪɟəx ]) is the capital of the Irish county of County Sligo and is located on the Garavogue River in Connaught Province . The Irish name means “place of the mussels”, as the coast off Sligo was known for its abundance of shellfish ( Culleenamore Middens ). The city has 17,547 inhabitants (as of 2011).

Sligo is the largest city in the north-west of the Republic of Ireland and a transport hub, including to Northern Ireland and County Donegal . It is also the bishopric of the Roman Catholic diocese of Elphin .

Traces of prehistoric times can be found in the Court Tomb of Killaspugbrone . The city was founded by the Vikings .

Worth seeing include Calry Church and Sligo Cathedral, but especially the ruins of Sligo Abbey , which was built by Maurice Fitz Gerald, the city's founder. Sligo is bordered on the periphery by two of Ireland's most literary mountains, Ben Bulben , a table mountain, and the Knocknarea with the burial mound of the mythical Queen Medb . At the foot of the Knocknarea is Carrowmore , a megalithic necropolis with dolmens and passage graves .

The town has a small airfield of regional importance in Strandhill , which was closed to scheduled flights in 2011.

Sligo has around 150 pubs and is the central shopping town for Counties Sligo and Leitrim .

Sligo is home to three-time Irish football and cup winners Sligo Rovers , who currently plays in the Irish Premier League.

There are three local newspapers in Sligo. The Sligo Weekender comes out on Tuesdays, while The Sligo Champion and Sligo Post come out on Wednesdays. There is also a local radio station, Ocean FM . The studios are located in Collooney, County Sligo, Donegal and Manorhamilton, County Leitrim. Ocean FM broadcasts to Donegal , Leitrim and Sligo Counties .

Sligo has partnerships with the following cities: