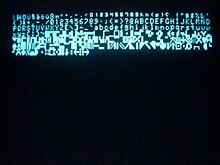 The Color Genie (EG2000) was an 8-bit - computer , which occurred in August 1982 at the German market. In spite of its initial success, the device did not achieve the sales figures aimed for and, especially after the success of the later presented C64, no longer played a major role. There was also a negative rating in the test magazine of Stiftung Warentest . The geniuses were made by EACA in Hong Kong . The distribution in Germany took place through the company Trommeschläger Computer Studio (TCS) and the computer specialist trade z. B. via the company Schmidtke Electronic in Aachen . After the bankruptcy of EACA and the loss of one of the main suppliers, TCS also had to file for bankruptcy in August 1985.

The programming was done either through a Assembler - compiler or via the in ROM stored ColourBasic . After connecting a floppy disk drive , the BASIC instruction set was expanded via EPROMs on the cartridge, which was connected to the floppy disk controller via a ribbon cable , mainly with commands for processing character strings. The CMD commands required for floppy disk operation were also added. There was also space for a third (EP) ROM on the circuit board of the cartridge. B. could contain a machine language monitor or a hard copy program.

Using the cassette recorder as a storage medium was a great challenge for patience. For example, it took a good 20 minutes to load one of the biggest programs, the game Deathtrap , a 3D adventure with character set graphics. The cartridges on which the games were sold were often provided with an additional bit at the end as copy protection, which should make copying attempts more difficult. A program was specially distributed which provided cassette programs with copy protection (and with which the cassettes could still be copied - as with any good HIFI cassette deck with two drives).

Basic programming was not carried out with a text editor , as is common today , but with a line editor .

There was a graphic and a text mode for the display, which could be switched between in the program or via the <MOD SEL> key. Since the two video memory areas were at different addresses, it was possible to build up the graphics while the text was being displayed in the background. Text display was also possible in graphics mode, but the low resolution of this mode made the fonts extremely large. Many games therefore did not use the graphics mode, but built up the graphics from special characters that could be freely defined. A simple flight simulator (a version of a TRS-80 program) used the programmable special characters in text mode to represent the simple, jerky vector landscape and the instruments. The graphic and text resolution could be changed in limited areas by programming the CRT register accordingly. B. in the games Chopper and Trashman.

A " graphics card " was also offered as an extension, but only changed the number of characters in text mode.

The joystick EG2013 was special because it was not queried digitally, as is usual with Atari , Amiga and C64 , but analogue. Depending on the position, the joystick provided values ​​between 0 and 255 for the X and Y axes (128 in the middle position). In this way, a control could be implemented which took into account the width of the joystick movement. If the control lines of the keyboard were branched off to a 9-pin socket, an Atari-compatible joystick could also be used. All games that used the arrow keys and the space bar could also be played with a joystick.

The sound chip also enabled voice output, such as B. in the game Crazy Paint II. Here the programmer used two short samples of his own voice.

In Germany, the manual “COLOR BASIC - easy learning” was included and there was a user club in Hamburg with its own club magazine “BYTE”, which was discontinued after ten issues.

From April 1983 the Color Genie was delivered with the so-called "New Rome". Externally, these models can be recognized by the built-in level meter for the cassette recorder connection. The resolution in text mode has been increased to 40 × 25 characters and the graphics resolution to 160 × 102 points. In addition, new Basic commands have been added and errors in Basic commands have been corrected. In the first models, for example, the algorithm of the basic command for filling screen areas up to a border color was incorrectly implemented: the color "ran out". The semiconductor components - housed in a plug-in socket - in the DIL housing with the basic interpreter could be sent to the German distributor and a corrected version was returned about 2 weeks later. Obviously the storage space was not sufficient, so that the command option for the "sudden" color change of the screen background in graphics mode was omitted and had to be replaced by a much slower method (drawing a "box" in the desired color over the entire screen). A detailed description of the changes brought about by the ROMs can be found in the appendix of the manual "COLOR BASIC - easily learned".

Various third-party providers (mostly individual programmers) and the TCS company itself offered many different programs for the Color Genie. There was a plentiful selection of games and learning programs in particular , but word processors, painting programs and database programs were also available.