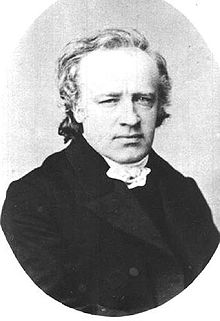 Heinrich Louis d'Arrest (born August 13, 1822 in Berlin , † June 14, 1875 in Copenhagen ) was a German - Danish astronomer who worked in Germany and Copenhagen. He discovered several comets , the asteroid (76) Freia and 342 deep sky objects. He was also a co-discoverer of the planet Neptune . He is best known for his research on asteroids and comets, but also played a key role in deciphering galaxy clusters .

Heinrich Louis D'Arrest's ancestors were French Huguenots who fled to Germany in 1685 after the edict of Nantes was repealed . His father was an accountant for the French colony of Louis d'Arrest .

D'Arrest studied mathematics at the University of Berlin . During this time he made astronomical calculations and sky observations. On July 9, 1844, he observed a comet, the discovery of which, however, was awarded to the Frenchman Mauvais, who had seen it two days earlier. On December 28, 1844, d'Arrest discovered another comet.

In 1845 he became an assistant to Johann Franz Encke at the Berlin observatory . Together with Johann Gottfried Galle , he discovered the planet Neptune on September 23, 1846 . Galle and d'Arrest systematically searched the sky according to the information provided by the French Urbain Leverrier , who had calculated the position of the planet based on the orbital disturbances of Uranus .

In 1848, d'Arrest moved to the Leipzig University observatory on the Pleißenburg . Here he began with a systematic determination of the position of foggy objects. In 1850 he was made an honorary doctorate from the Philosophical Faculty of the University of Leipzig, and in 1851 he completed his habilitation here. On June 28, 1851, he discovered the periodic comet 6P / d'Arrest . In the same year he published a treatise on the orbits of minor planets. In the spring of 1852 he was appointed associate professor of astronomy to prevent leaving for Washington, DC . D'Arrest initiated and promoted the construction of a new observatory in Leipzig's Johannistal .

In September 1857, d'Arrest left Leipzig and worked as a full professor of astronomy at the University of Copenhagen . With the telescope of the Copenhagen observatory, which had an opening width of 27.5 cm, he continued his observation of foggy objects and discovered several hundred galaxies , star clusters and gas nebulae . He summarized his observations in the work Siderum Nebulosorum Observationes Havnienses published in 1867 . On October 21, 1862, he discovered the asteroid (76) Freia .

More important for the professional world was his exploration of the Coma galaxy cluster , which he analyzed from 1861 to 1867 through systematic observations. The Copenhagen telescope had an ideal field of view for this purpose . About 30 years later, Max Wolf supplemented this research with photographs of the Coma heap taken deeply in Heidelberg .

D'Arrest suffered badly from hypochondria in the last years of his life . He died of heart failure at the age of 52.