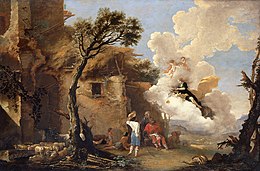 Astraea or Astraia ( Greek Ἀστραία ) is a figure in Greek and Roman mythology related to the myth of the ages of the world , which appears for the first time in Hesiod's poem Works and Days . There the poet describes the last, the iron generation, which no longer knows any respect for justice and law, no respect for the parents or the holiness of the guest, whereby their embodiment finally leaves the earth:

Then on to the Olympus we
wander from spacious earth , enveloping the glorious body with white robes,
fleeing far from the hustle and bustle of men to the tribe of the eternal,
shame and fear *) ; Mortal people's
grief will be left behind , and help nowhere to show itself in misery.

Aidos ( Αἰδὼς ), the personification of shame (especially the shame of shame and shame because of injustices committed), and Nemesis ( Νέμεσις ), the embodiment of punitive divine justice, turn their backs on a hopelessly corrupted humanity and thus mark the retreat of the Divine from the world.

What is only briefly mentioned by Hesiod was made by Aratos of Soloi in the 3rd century BC. In its Phainomena expanded into an independent myth. In this astronomical didactic poem tells the story of the origin of the constellation of Virgo . This virgin was accordingly Dike , the embodiment of justice (according to the nemesis in Hesiod), who lived in the midst of the people in the original Golden Age and appeared visibly in the congregations to proclaim the law:

Now in the people's market, and now on a spacious military route,
she sang civil laws with a serious warning.
They never knew about unfortunate
quarrels, nor about the field department, the quarrelsome, nor about turmoil.
One lived simply and far from the dangers of the sea.
Physical necessities never have to lead a ship from a foreign country,
but the bull and the plow, and she herself, the honored of the peoples,
she offered everything abundantly, the right-hander Dike.

Before the next, the silver human race, which was already prone to violence, Dike retired to distant mountains, from which she seldom came among the people, and then only to accuse decay and to warn of an even worse future. This then also occurred with the appearance of the third, the brazen human race (in the version of the world ages of Aratos there is neither a bronze human race nor a race of heroes; the third, brazen, is already the most corrupt). Among these murderers and robbers who slaughter and eat the plowed bull, there is no longer any lingering for Dike, she ascends to heaven and there becomes the constellation of Virgo.

Traditionally Dike was the daughter of Zeus and Themis in Aratos but is considered the father of the Virgin Astraios called in Hyginus still is then Eos added as a mother.

Finally, Ovid gives the Nemesis-Dike virgin its own name, Astraea, or Astraia in Greek. In his version of the myth, like Hesiod, he only makes the virgin appear at the end, when she leaves the blood-tainted earth of the Iron Age:

Respectful shyness is gone, and from blood-dampened lands
the virgin returned, Astraia, the last of heaven .

Conversely, in Virgil's famous prophetic fourth eclogue , the appearance of the Virgin indicates the imminent return of the Golden Age:

The end of time has already come after the song of Cumae.
And completely new genders begin the run great.
Astraea is already returning, Saturnus' reign returns:
New births will soon rise from the sublime sky.

Immediately after these verses, Virgil speaks of the birth of a child, a savior, which contemporaries referred to Augustus (but also to other possibly intended persons). Virgil supported an interpretation of Augustus by having Aeneas' father Anchises announce the return of the Golden Age in the Aeneid during the underworld voyage, this time with express reference to Augustus. In Christianity, Virgil's fourth eclogue was interpreted as the birth of Jesus , which in turn made Virgil a kind of anticipated saint. Obviously, the mythical virgin of prophecy was identified with the virgin Mary , for the first time by Emperor Constantine in his “speech to the assembly of saints”.

This myth is taken up again in the England of Elizabeth I. The Queen herself becomes Astraea, who promises justice and a return to the original religion (she or her court poets here refer to the Anglican Church). The Golden Age gains a new reality through the discovery and settlement of the New World. It is no longer just a realm of faith, but a global empire united by the rule of a just, virtuous queen.