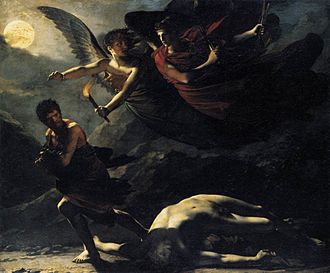 Dike ( Greek Δίκη, "justice") is one of the hearing in Greek mythology . She is the personification of justice .

Her parents are Zeus and Themis , her sisters are Eunomia ("good order") and Eirene ("peace"). She is the mother of Hesychia , the personification of peace and quiet.

In the Orphic Hymn to Dike it says:

I sing to Dike's eye, who, seeing everything gloriously,
sits herself on the ruling Zeus Kronion's holy throne,
And from heaven the life of people of many origins looks at;
Who punishes injustice, weighing goddess Dikea,
And reconciles what is unequal according to the truth of fair law.
It is difficult to settle that which
wells up in the bad hearts of men , who stand after several of unjust decisions.
She only trod unjust works with avenging footing,
enemy of the unjust, but friendly towards the just.
Goddess, come on, come with a noble disposition, O Dikea,
always how often the humble day of life approaches!

Her closeness to father Zeus allows her to report a violation of the law she discovered and to demand punishment, whereby here in myth (as often in reality) the people have to atone for the wrongdoings of their rulers, according to Hesiod in his poem Werke and days :

But Dike, the virgin daughter of Zeus,
glorious and honored by the gods, of the inhabitants of Olympus , also watches .
And whenever someone has offended her with treacherous scorn, -
she then sits next to her father, the Kroniden, and complains to him
about the iniquity of the sex that the people atone for their
rulers' offenses, which are full of unfortunate schemes

A bending of the law leads to misfortune and divine punishment. In the opposite case, respect for the law makes society prosper:

The right course is
swift , wherever even commercially available men drag and drag, while dishonestly they pass judgment.
Dike wandered through the city and the seats of the people with lamentations,
thickly enveloped by fog, to bring ruin to the people who had
displaced them and not distributed them according to their fee.
Those who, on the other hand, give
honest words to strangers as well as natives and never deviate from what is law, for
whom the city flourishes and the inhabitants flourish in it;

Dike is identified with Astraia / Astraea. In the Phainomena des Aratos von Soloi , she leaves the corrupt human race in the bronze age as the last remaining divine power and flees to heaven, where she becomes the constellation of Virgo . This corresponds to the figure mentioned by Ovid Astraea .

As the personification of the penal justice it corresponds to the Justice .