The Hurrians ( Hurrians , Churri , Hurri, Akkadian ???, ancient Egyptian in the plural the name of the inhabitants: HRW ) were in the 3rd and 2nd millennium. BC on the border with northern Mesopotamia . From there they made trains to Assyria , Asia Minor and the Levant .

The name "Hurri" was first discovered in the library of Aššurbanipal , which was found in Nineveh in the early 19th century . In 1887 the Amarnata tablets were discovered, under which a letter from Tušratta , King of Mittani , to Amenophis III. was in an unknown language. It was published in Berlin in 1890, whereupon Peter Jensen (1890), Rudolf Ernst Brünnow and Archibald Henry Sayce submitted attempts to decipher it. In 1915 the language of the Tušratta letter was referred to as Mittan.

Hugo Winckler equated the "Charri" (country name in New Egyptian Chor / Char / Cher ) with the Hurrites (Horites) of the Bible . In 1910 he derived the word Harri from " Aryans ". 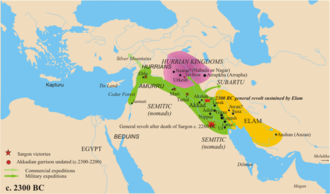 Hurrian Kingdom around 2300 BC Chr. (Purple)

The Hurrites have been since the end of the 3rd millennium BC. Proven in the north-eastern edge of the mountains of Mesopotamia. They soon came under the influence of the Sumerian - Akkadian high culture and for their part played an important role in conveying this culture to Syria and Asia Minor , for example to the Hittites .

End of the 18th century BC The Hurrites began to spread to eastern Anatolia, northern Mesopotamia and Syria. Hurrian armies undertook campaigns to Palestine and even to Egypt , where they were soon very feared. In battle, they were usually superior to their opponents due to the horse-drawn chariots . In the Hula Valley in the north of today 's Israel they founded The city of Hazor , which was the largest city in Canaan in the 15th to 13th centuries BC. Was. The Hyksos , a group of Semitic and Hurrian immigrants, conquered between 1719 BC. BC and 1692 BC BC Egypt and founded their capital Auaris in the eastern Nile Delta .

In the 16th century BC The kingdom of Mittani arose , which was located between the upper Euphrates and Tigris . Its capital, Waššukanni , is suspected to be near Tell Fecheriye in northern Syria, where a multi-year excavation campaign has been taking place since 2006. The kings of the Mittani empire mostly had non-Hurrian throne names (e.g. Tušratta ), for which an Indo-Aryan etymology can be proven. The few Indo-Aryan loanwords (names of gods and personal names, hippological technical terms) preserved in the cuneiform documents may suggest a small Indo-Aryan upper class ( maryanni = chariot fighter, cf.ved.-altind. Márya = young man, hero), which was the greatest at the time Mittani's development of power was already hurried.

The Middle Kingdom was around 1335 BC. Dependent on the Hittites and finally smashed by an attack by the Assyrians under Shalmaneser I. Hurrian principalities and population groups can also be detected after the smashing of the Middle Kingdom.

Hurrian is neither a Semitic nor an Indo-European language . Apart from the related Urartian , no closer relationships between Hurrian and other languages ​​can be established; a distant relationship could only exist to the East Caucasian languages .

The main gods are Teššup as the weather god , the sun goddess Ḫepat and Kumarbi , the father of the gods. The moon god Kušuḫ only plays a minor role in the surviving myths. Kummarbi (in Azuḫinnu also Kummurwe) is sometimes equated with Dagān and thus had Šala as his wife. The Grand Vizier Kummarbis is based on a text from Alalaḫ Mukišanu . In pictures, Ḫepat usually stands on a lion, her symbolic animal; no further attributes are known. She was venerated in Aleppo , Apzisna, Šamuḫa , Kummani , Uda and Ḫurma .

The son of Ḫepat and Teššup was Šarruma , who was worshiped in Uda and Kummanni. The goddess Šawuška is usually equated with Ištar and also stands on a lion, but, unlike Hepat, often has wings. Your companions are Ninatta and Kulitta .

The Hurrian religion had a great influence on the Hittites .

Influences of Hurrian myths (change and replacement of dynasties of gods) can still be demonstrated in Hesiod's theogony . In this context, the Hurrian texts " Kingship in Heaven " and "The Song of Ullikummi ", which have been handed down by the Hittites, seem particularly significant.

Hurrian art is characterized by stone slabs ( orthostats ) that are decorated with reliefs and set up in rows . The rectangular nave and the monumental visual art are also typical . The Hurrian hymns found in Ugarit are the oldest notations of melodies.