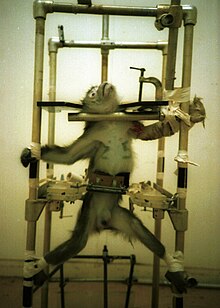 Macaque in an experimental laboratory

Depiction of cruelty to animals on a postage stamp from 1972 , designed by Holger Börnsen

Animal cruelty is the torture, ill-treatment, or unnecessary killing of animals . The term describes two different situations; on the one hand the colloquial name of a criminal offense , on the other hand a psychological phenomenon .

Cruelty to animals is a criminal offense in Germany under the Animal Welfare Act .

The offense described in Section 17 of the Animal Welfare Act (TierSchG) is referred to as cruelty to animals , without this term being used in the law. According to Section 17 , anyone who intentionally is punished with imprisonment for up to three years or a fine

In addition, a life-long ban can be imposed on keeping or looking after animals or dealing with them in any other professional way. Affected animals can be drafted. Fines are to be imposed for less serious, then also negligent forms of animal abuse.

If it is a foreign animal, the act can also be punishable as damage to property ( Section 303 of the Criminal Code ), whereby animal rights activists have protested unsuccessfully against this terminology.

Section 2 of the Animal Welfare Act defines the requirements for the keeper and guardian of animals. Whoever keeps, looks after or has to look after an animal,

Cruelty to animals is punishable under both administrative and judicial law in Austria. The administrative criminal offense is formulated in § 5 TSchG . According to paragraph 1, it is forbidden to “inflict unjustified pain, suffering or harm on an animal or to make it extremely afraid.” Paragraph 2 lists individual facts, such as torture breeding (Z 1), breeding for aggressiveness (Z 2) , the use of aids to influence behavior through criminal stimuli (Z 3 lit b) or accommodation that is associated with suffering for the animal (Z 13). In the event of violations, an administrative fine of up to 7,500 euros is provided, in the event of recurrence up to 15,000 euros. In severe cases, an administrative fine of at least 2,000 euros must be imposed.

Cruelty to animals is also punishable by law. The § 222 (1) of the Criminal Code prohibits mistreating an animal raw, inflict unnecessary anguish to suspend it, although to live in freedom is unable or to rush it to other animals to an animal tortures inflict. Paragraph 2 makes the transport of animals a punishable offense if they are denied feeding or watering during this time (even if negligently ) and are thereby put in an excruciating condition. It is also forbidden to willfully kill a vertebrate . The penalty in these cases is up to two years imprisonment .

If cruelty to animals falls under the penal code, it is not to be punished as a violation of the Animal Welfare Act (prohibition of double punishment ). Nevertheless, administrative consequences can also arise for the animal abuser. In the event of a judicial conviction or multiple administrative punishments for cruelty to animals, animal keeping can be prohibited. The courts have to report both the final conviction and the diverse attitudes to the responsible district administrative authorities. The courts also only have to report the suspicion of a violation of animal welfare regulations. Bans on keeping animals apply throughout Germany.

Cruelty to animals is punishable by Article 26 ff of the Swiss Animal Welfare Act (TSchG).

Cruelty to animals as a symptom of a disorder

Cruelty to animals is described in the ICD-10 as a symptom of conduct disorder (F91). Cruelty to animals can often be observed in violent criminals in childhood and adolescence. It is difficult to differentiate between them, as such behavior is not uncommon in children and adolescents. There is also a connection between violence against animals and interpersonal violence.

Psychoanalysts see cruelty to animals as a defense mechanism in the form of a "shift". The animal embodies the role of a whipping boy . Often former victims become perpetrators who, in the act of torture, re-enacted their subjectively experienced torture on the object, the animal, and experienced a brief reduction in their pent-up internal aggression.