Damage to property is an offense for which the willful damage or destruction of someone else's property is punishable .

(1) Anyone who unlawfully damages or destroys a property of another person will be punished with imprisonment for up to two years or with a fine.

(2) Anyone who, without authorization, changes the appearance of a foreign object in a way that is not only insignificant and not only temporarily will be punished.

(3) The attempt is punishable.

In addition to the property damage the separate offenses of consist § 303a of the Criminal Code ( data changes ) and § 303b of the Criminal Code ( computer sabotage ), because data no items are in the legal sense. According to § 303c StGB, the criminal liability of property damage, data modification and computer sabotage requires a criminal complaint . Damage to property is a private lawsuit . 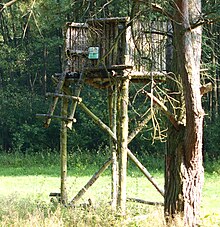 An underpass at Königs Wusterhausen train station with graffiti: In places that are rarely visited by public life at certain times of the day, property damage is preferred. According to the 39th Criminal Law Amendment Act, which came into force in 2005, graffiti can in principle be prosecuted as damage to property.

The term “ thing” includes not only physical objects, but also animals , for which Section 17 of the Animal Welfare Act must also be observed. It does not matter whether the thing has any value. House remains that have already been destroyed can be further damaged. The physical state (solid, liquid, gaseous) is also irrelevant. In the case of gaseous things, however, the delimitation of the thing is necessary ( gas bottle or similar).

The criminal liability also presupposes that the damaged thing is foreign . This characteristic is to be understood as with theft : the thing is foreign if it is not the sole property of the perpetrator and is not ownerless .

Acts of action are first of all damage and destruction . Damage is a not inconsiderable violation of the material substance. If something is just dirty and it can be cleaned without great effort, it has not been damaged. Since the entry into force of the thirty-ninth Criminal Law Amendment Act in 2005, the not only insignificant or temporary change in appearance has also been an element of the offense (paragraph 2). This law had the express aim of being able to criminalize graffiti . Only practice can show whether this has been achieved. In legal doctrine, doubts are expressed about the suitability of Section 303 (2) new version with regard to the constitutionally required certainty. Also the constitutionally guaranteed freedom of art ( Art. 5 Abs. 3 S. 1 GG ) does not seem to have been sufficiently observed, so that the law itself is disproportionate. Even before the law was changed, a graffito was subject to the element of damage in paragraph 1 of the regulation if the subsequent cleaning had a not inconsiderable effect on the surface quality, especially when using sandblasting devices. Paragraph 2 therefore relates to graffiti that can be removed without leaving any residue.

A thing does not necessarily have to be damaged in its substance, according to established case law it is sufficient if the thing is impaired in its "intended usability":

The criminal liability presupposes intent , whereby it is sufficient, as always, if the perpetrator does not want the damage to be done, but nevertheless considers it possible and approves it (so-called "conditional intent", also called contingent intent ). A negligence committed criminal damage is not punishable.

The trial of criminal damage is found in paragraph 3 is punishable.

Damage to property is a common offense accompanying burglary . In most cases, however, a unit of action can be assumed here. Unity occurs in crimes against the person, when a weapon is wielded against the person or violence is exercised and clothing is damaged in the process.

(1) Anyone who unlawfully deletes, suppresses, makes unusable or changes data ( Section 202a, Paragraph 2) is punished with imprisonment for up to two years or with a fine.
(2) The attempt is punishable.
(3) For the preparation of a criminal offense according to paragraph 1, § 202c applies accordingly.

The offense of computer sabotage ( § 303b StGB) reads:

1. commits an act pursuant to Section 303a (1),
2. Entering or transmitting data (Section 202a (2)) with the intention of inflicting another disadvantage
3. A data processing system or a data carrier that is destroyed, damaged, rendered unusable, removed or changed is punishable by imprisonment for up to three years or a fine.

(2) If it is a question of data processing that is of essential importance for a foreign company, a foreign company or an authority, the penalty is imprisonment of up to five years or a fine.

(3) The attempt is punishable.

1. causes a large-scale loss of property,
2. acts commercially or as a member of a gang that has joined forces to continue to commit computer sabotage,
3. the act affects the supply of the population with essential goods or services or the security of the Federal Republic of Germany.

(5) For the preparation of a criminal offense according to paragraph 1, § 202c applies accordingly.

Both of these facts try to protect the new media by protecting data and data processing on a criminal basis. Whether this succeeds has been discussed controversially in the literature. This protection fails especially against virus programmers , however not for legal reasons, but because of the lack of success in investigations. In addition, the investigations often conflict with data protection , so that a constitutional investigation cannot be carried out.

(1) Anyone who illegally objects to the worship of a religious society existing in the state or objects that are dedicated to worship , or tombs , public monuments , natural monuments, objects of art, science or trade that are kept in public collections or are publicly displayed , or objects which are used for the public benefit or to beautify public paths, squares or facilities, damaged or destroyed, are punishable by imprisonment for up to three years or a fine.
(2) Anyone who, without authorization, changes the appearance of an item or an item indicated in paragraph 1 in a way that is not only insignificant and not only temporarily will be punished.
(3) The attempt is punishable.

The peculiarity of the offense is that the perpetrator can also be the owner of the thing. Third-party property is not protected, but the public interest in the integrity of the objects. Since this is a different legal asset, it is disputed whether it is a separate offense in §304 StGB or a qualification of §303 StGB.

The destruction of buildings is a qualification according to § 305 StGB:

(1) Anyone who unlawfully destroys a building , a ship , a bridge , a dam, a built road , a railway or another structure that is owned by another person, in whole or in part, is punished with imprisonment for up to five years or with a fine.
(2) The attempt is punishable.

Railways are only to be understood as the rail body (also of trams ). If the destruction is committed by setting a fire , the arson (§ § 306 ff. StGB) takes precedence over property damage offenses .

The destruction of important work equipment according to Section 305a of the Criminal Code has become particularly important because the vehicles of the police, the armed forces and the aid organizations have been given special protection. The provision was originally intended to protect against terrorist activities.

1. A third-party technical work equipment of significant value that is used for the construction of a plant or a company within the meaning of Section 316b Paragraph 1 No. 1 or 2 or a plant that is used for the operation or disposal of such a plant or such a company , is essential, or
2. an essential for the use of technical equipment of the police , the army , the fire brigade , the civil protection or rescue service , which is of significant value, or
3. a vehicle used by the police, the armed forces, the fire brigade, disaster control or an ambulance service

completely or partially destroyed, punishable by imprisonment for up to five years or a fine.

(2) The attempt is punishable.

Wikinews: Destruction of Critical Work Equipment  - In the News

Section 125 of the Criminal Code reads:

Anyone who destroys, damages, defaces or makes useless something is punishable by imprisonment of up to six months or a fine of up to 360 daily rates.

Protected legal interest is the property of others.

The object of the crime are all physical foreign things, but also animals ( § 285a ABGB ). The restriction to physical property results from the acts that the law enumerates: Claims cannot be "damaged". This restriction is relevant in so far as the Austrian ABGB uses a very broad technical term that also includes obligations under the term “personal property rights”. A thing is “foreign” if it is owned or at least jointly owned by a person different from the perpetrator. Own and ownerless things are not included in the offense. According to the wording of § 125 StGB, items with an exchange value as well as items with a mere use value are included in the offense.

With regard to the acts, a distinction is made between “damaging”, “defacing”, “rendering useless” and “destroying”.

An object is damaged when its material integrity is compromised . A functional impairment is insignificant.

A thing becomes defaced when its external appearance is impaired .

Making an object unusable is understood to mean that the perpetrator acts on the object in such a way that it can no longer (fully) fulfill its intended function (e.g. bending an umbrella).

An object is destroyed when it has been rendered unusable by an impairment of the substance and a repair is no longer possible .

Section 126 of the Criminal Code reads:

1. in a matter that is dedicated to worship or veneration by a church or religious society existing in Germany,
2. at a grave, another burial site, a tomb or at a memorial for the dead that is located in a cemetery or in a room used for religious practice,
3. on a public monument or on an object that is under monument protection,
4. to an item of generally recognized scientific, ethnological, artistic or historical value that is in a generally accessible collection or in another such location or in a public building,
5. an essential part of the critical infrastructure ( Section 74 Paragraph 1 Item 11) or
7. through which the perpetrator causes damage in excess of 5,000 euros.

(2) Anyone who causes damage to the thing in excess of EUR 300,000 through the act is punishable by imprisonment from six months to five years.

In Switzerland, the issues of property damage are regulated in Articles 144 and 144 bis of the Swiss Criminal Code.