The title of this article is ambiguous. Further meanings are listed under Ikarios (disambiguation) . 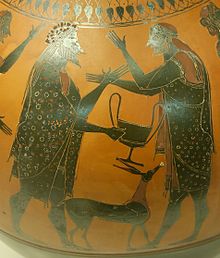 Ikarios ( Greek  Ἰκάριος ) was the eponymous hero of the Attic Demos Ikarion and in Greek mythology the legendary founder of viticulture .

The starting point of the tradition is the poem Erigone by Eratosthenes of Cyrene , which only survives in a few fragments and was written in the 3rd century BC. BC originated. The legend was not invented by Eratosthenes, but there was an Ikariossage, a cult of Icarius and songs even earlier. The subject may already have been dealt with in a lost tragedy by Sophocles . The surviving versions of the saga ultimately all go back to the version of Eratosthenes.

Ikarios lived at the time of the Attic king Pandion and was married to Phanothea , the inventor of the hexameter .

In the library of Apollodorus Icarios is expressly referred to as a bringer of culture : Demeter with the gift of grain and Dionysus with the gift of wine appear at the same time in Attica and Ikarios plays the same role as Keleos and his son Triptolemos in Eleusis in Athens as a propagator of viticulture as a promoter of grain cultivation.

Ikarios had received the wandering Dionysus hospitably. The god refused an initially offered fresh goat's milk and instead made his host familiar with the worry-breaking power of wine. Since Ikarios was considered a skilled gardener, Dionysus also instructed him in the art of viticulture. On behalf of the god, Ikarios drove through Attica on a cart loaded with wineskins to introduce the people of the country to the new potion. When some shepherds became senseless in a deep intoxication, their comrades said they had been poisoned, murdered the Ikarios and buried the body under a tree on the Hymettos . Hyginus also reports a different version, according to which Ikarios was not buried under a tree, but rather thrown into the source of the Anigros , which is why no one drank its water.

After a long search, his daughter Erigone finally found the grave , led by her dog Maira , buried her father and hanged herself on the tree. The dog Maira also died.

Ikarios was transported to heaven as Bootes ("ox driver", since he had driven around on a team of oxen), Erigone as a virgin , Maira as Sirius . But Dionysus sent the inhabitants of Attica a suicide epidemic among the virgins, which did not end until a sacrificial festival was established for the Erigone and the Ikarios, the so-called "rocking festival" ( Aiora ).

Hyginus reports on the fate of the murderers in his star tales that they fled to the island of Keos and found a friendly welcome there. Thereupon Sirius-Maira would have risen and the heat of the dog days would have made the residents languish. Aristaios , the king of Keos and son of Apollo asked his father for an oracle about how to remedy the misery. The god replied that Aristaius should make plentiful sacrifices in atonement and that Zeus should ask Zeus to send a gentle wind to ease the heat. That happened and Zeus sent the Etesian winds blowing for 40 days in the summer months, known today as Meltemi .

In the Dionysiacs of the Nonnos of Panopolis , the myth of Ikarios and Erigone is also told in the 47th song with some variations. Nonnos reproduced the myth on the basis of the poem of Eratosthenes or a reshaping of the material ultimately based on this poem.

Pseudo-Plutarch relates a Roman analogue in the Parallela Minora (chap. 9) : There is talk of a farmer who is visited by Saturn , who seduces the daughter, who is called Entoria here, and fathered four sons with her (Janus, Hymn, Faustus, and Felix). Saturn teaches Icarius how to grow wine, the same misunderstanding arises and Icarius is stoned, whereupon his sons hang themselves. However, it is assumed that the Parallela Minora are a parody (with noticeable linguistic weaknesses).

Presumed connection with the origin of the tragedy

Hyginus links the Icarius saga with the introduction of a new dance and quotes a verse from Eratosthenes. His report has been linked in research to the origin of the Greek tragedy , which has led to an intense and ongoing research debate. The verse is flawed and difficult to interpret. First it is reported that Ikarios planted a vineyard with the vines received from Dionysus. The passage in question reads:

“When he [Ikarios] had planted the vine and, with the most careful care, made it bloom slightly, a ram is said to have come into the vineyard, seen the delicate leaves and plucked them off. Ikarios is said to have become angry about this act, killed him, made a leather tube out of his skin, filled him with air, thrown him in the middle and forced his comrades to dance around him. That is why Eratosthenes says: 'In Ikaria, where they [the Icarians] danced around a goat for the first time.' "

From the goat ( Greek  τραγος , tragos ) the term "tragedy" should be derived, which is related to the " goat song ". According to one interpretation, the goat's fur was the first poet's prize and Ikarios was the first choir leader. Virgil adopts this etiology in the Georgica . Jumping (on one leg) over the inflated goat skin during drinking is also said to have its origin here as askoliasmos ( Greek ἀσκωλιασμ́ος ). The interpretation as “goat song” is opposed to the weighty fact that the verse does not speak of a song but of a dance.