The Greek island of Kea ( modern Greek Κέα [ ˈkʲɛa ] ( f. Sg. ) Also Tzia ( modern Greek Τζια ), ancient Greek Κέως Keōs ) belongs to the Cyclades . Together with the now uninhabited island of Makronisos, it forms a municipality within the South Aegean region and, together with Kythnos, forms the regional district of Kea-Kythnos .

The westernmost inhabited Cyclades island is about 20 km east of Cape Sounion and 60 km southeast of Athens . Neighboring islands are about 15 km west of Makronisos, Gyaros 22 km east. The shortest distance to the southern island of Kythnos is 12 km.

The island is oriented roughly from south-southwest to north-northeast. The maximum length is around 20 km, the maximum width 10 km. The area is 131.693 km².

Kea is a mountainous island with an average height of 285 m, the highest mountain Profitis Ilias reaches 568 m. The mostly steep coast is interspersed with numerous small bays, sea grottos and capes. Only the deep, natural bay of Agios Nikolaos (Όρμος Αγίου Νικολάου) on the northwest coast protects against ocean currents and winds. The coastal areas are rocky and barren, in contrast to the fertile interior of the island, where small plateaus interrupted by valleys and gorges with lush vegetation and small forests of the Valonea oak ( Quercus macrolepis ) characterize the landscape.

After Greece gained independence, the island of Kea also formed a municipality (Δήμος Κέω). From 1919 to 1996 the island was subdivided into the two rural communities Kea (Κοινότητα Κέας) and Korissia (Κοινότητα Κορησίας), these initially formed their own municipal districts since the merger in 1996 to form the municipality of Kea. With the administrative reform of 2010, these in turn were given the status of a city district or local community, depending on their number of inhabitants. The administrative seat of the municipality is Ioulida . According to the 2011 census, the island had 2,455 inhabitants. Most of the population lives in the north of the island. The main town in the interior of the island, Ioulida, has 633 inhabitants, the port of Korissia 711 inhabitants. There are also other smaller mountain hamlets and coastal towns, such as Pisses on the west coast with the only campsite on the island.

Ioulida from the west

The main source of income is tourism, but the residents of Kea used to live from agriculture and fishing, which is why there are only a few hotels on the island today, but many private houses.

Kea is one of the most important archaeological sites in the Aegean. Grave finds from the Neolithic Age were made in several places on the north-west coast of the island facing the mainland. At Cape Kephala , one of the sites, traces of a short-term settlement were also discovered.

The Bronze Age settlement on the Agia Irini peninsula in the Agios Nikolaos Bay near Korissia in the north-west of the island is more important than the Neolithic finds . It already had predecessors at the end of the Neolithic and through the early Cycladic times; however, the peak of settlement activity lies in the Middle Cycladic and the beginning of the Late Cycladic times (see Cycladic culture ). A fortification and a sanctuary, which was consecrated to Dionysus in historical times, date from this era . In its heyday Agia Irini was next to Phylakopi on Milos and towards the end also Akrotiri on Santorini the most important settlement of the southern Aegean.

Lion of Kea, possibly from the 6th century BC Chr.

The Greeks settled in Kea coming from Arcadia , Athens and Naupaktos ; in the 7th or 6th century BC The island came under the rule of Eretria . The inhabitants took part in the Persian war against King Xerxes I as well as in the First Attic-Delian League, which was founded afterwards . When the importance of Athens' leading power began to wane, the cities of Keas broke away from the league and formed a sympolitie . However, this was dissolved by Athens and the island was incorporated into the Second Attic-Delian League. For a short time she tried to break away from it again, but this was prevented by the general Chabrias .

In Classical Antiquity, there were four cities on Kea: Iulis, today's Ioulida in the middle of the island, Karthaia in the southeast, Koresia on the site of today's Korissia in the northwest and Poiēssa, today's Pisses on the southwest coast. At the time of the geographer Strabo , around the turn of the times , the last two no longer existed. The residents of Koresia were resettled to Iulis, those from Poiēssa to Karthaia, which was also abandoned in the Middle Ages.

The main archaeological finds that have been preserved are the walls of all four cities (built between 362 and 350 BC), the remains of a temple each in Iulis and Koresia, as well as three temples and a theater in Karthaia. There is also the figure of the lion of Kea (see below).

In the epoch of Hellenism , Kea first belonged to the League of Nesiots , then from around 220 BC. To the Aitolian League . From 200 BC BC the island was allied with Rhodes , got into disputes between Attalus I, Philip V of Macedonia , Antiochus III. and Rome for supremacy in the Aegean and finally fell to Rome. The Romans called the island Ceus. Marcus Antonius gave them to Athens.

Since the division of the empire in 395 AD , Kea belonged to the Byzantine Empire . After the Fourth Crusade (1202-1204) Kea fell to the Republic of Venice .

In 1566 Kea was taken by troops of the Ottoman Empire . After the end of the Greek War of Independence , Kea was awarded to Greece by the London Protocol of 1829 .

In 1916, the Titanic's sister ship , the Britannic , sank off the island in the so-called Kea Canal . The German submarine SM U 73 had previously mined the canal. 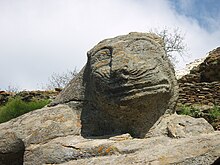 The lion of Kea

The lion of Kea

The main attraction of the island is the Lion of Kea northeast of Ioulida. It is a six-meter-long and three-meter-high statue of a resting lion, carved out of the granite in the 6th century BC. The smiling expression on his face is remarkable.

The lion is related to the mythology of the island: It is said to have been inhabited by nymphs in prehistoric times , so it was particularly rich in water and beautiful; because of its abundance of water it was called Hydroussa. The gods, who envied her this, sent a lion to drive away the nymphs; with them the abundance of water was lost and the island dried up.

There are regular ferry connections to Lavrio on the mainland and to the slightly smaller neighboring island of Kythnos .

In ancient times, the island was home to famous thinkers such as the poet and writer Simonides von Keos (around 550 BC), the poet Bakchylides (around 520 BC) and the philosopher Prodikos von Keos (around 450 BC). BC) and Ariston von Keos (3rd century BC). The doctor and anatomist Erasistratos was also born here.