Historical network picture ticket for the Ulm tram , with the conductor marking the beginning and end of the journey on the schematic route network map

The term ticket (also known as a ticket or ticket ; Switzerland ticket ; Anglizismus ticket ) denotes an identity card that entitles the holder to use public transport in return for a certain amount of money (transport fee; for example for the train , tram , trolleybus , omnibus or commercial aircraft ) . If the ticket is issued free of charge, it is called a free ticket .

Edmondson's cardboard ticket for the Deutsche Reichsbahn from 1965 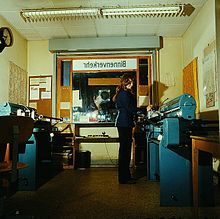 Ticket from a machine of the former Deutsche Bundesbahn (1988)

Tram coin of the city ​​trams of Solingen , issued instead of a classic ticket made of paper or cardboard

Tickets were developed from the original slip ticket and enabled easier billing through consecutive serial numbers . Thomas Edmondson made the first cardboard tickets around 1836. The cancellation by a simple punch or stamp was indelible; When they were issued, they were usually provided with the date of the day and the issuing point (by number or letter), for which purpose a ticket stamping press was used.

In the past, the term ticket was used on German railways ; in Switzerland it is still used today. Classic Edmondsonian cardboard tickets are used less and less, they have been replaced by tickets from ticket printers or ticket machines on special papers with several security features , similar to banknotes .

At the DB, if the destination could be reached via different routes, space restrictions were entered on the tickets. A ticket from Hamburg to Basel was issued like this: Hamburg - R (number) - Basel. This ticket could be used via Hanover - Kassel - Frankfurt am Main or via Bremen - Münster - Mönchengladbach - Mainz. Cruising and crossing in the direction of the destination were allowed. There were also room restrictions in local transport. Railway bus routes were also included in some of these .

The preprinted payment box tickets for urban transport companies in the GDR were among the most simply designed tickets . They were torn from a roll by the passenger and consisted only of a few operating symbols and the imprint: "Valid for one trip ... (consecutive number) ... according to the tariff".

Legally, the ticket is a so-called " small bearer paper " according to § 807  BGB. Ticket checks take place either regularly when the driver gets on, now very rarely by conductors and sporadically (regularly on the railroad) with civilian or uniformed employees of the transport company. Passengers who use the transport without a ticket, can according to § 265a of the Criminal Code of the offense of fraudulently obtaining benefits guilty; this so-called promotion creep is considered a criminological mass phenomenon. 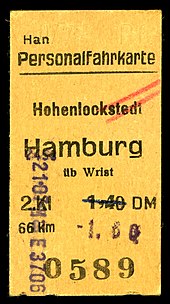 In addition to single tickets , which entitle you to travel in one direction or as a return ticket for a single round trip, there are season tickets . These allow any number of journeys within a spatial area of ​​application or on a certain route in a certain period of time (a day, a week, a month or year). Season tickets are offered specifically for certain groups of people, for example schoolchildren, students, senior citizens or as so-called " job tickets " for working people. In local public transport , they became the dominant form of the ticket. There are also additional tickets , for example as a connecting ticket in conjunction with a season ticket, as a surcharge for journeys in 1st class or for luggage (see also bicycle map ), dogs, etc.

In rail transport, certain machines also sell what is known as the initial route ticket , called a permit to travel in Great Britain . This is to be bought if it is not possible to purchase a ticket to the actual destination, for example from older DB local transport machines. It must be exchanged at the next opportunity (e.g. ticket inspection or travel center ), if necessary against payment of a difference. Emergency tickets are also sometimes issued in the event of a machine malfunction .

In air and shipping traffic , the ticket has long been spoken of; this designation has also been adopted by some railway companies and transport associations in recent years .

As staff tickets discounted tickets for active and former employees of DB AG as well as their family members are called.

In rail traffic, tickets are often canceled by the train attendant 's pincer imprint made with a conductor 's pliers . The pliers provide the ticket with a small hole (only for long-distance trains ) and a stamp. For example, the train number, date, place of use and gun number can be taken from this. The numbers on the Deutsche Bahn pliers imprint mean in detail: 1. Registered number of the pliers ; 2nd date; 3. Regional area of ​​the deployment site; 4.  Move number (the smaller first and third numbers are across the pincer print). With the imprint, a passenger can also provide evidence of having ridden a particular train - for example, in the case of compensation claims for delays.

In the area of Deutsche Bahn AG , season tickets are usually simply validated at the first ticket inspection. Tickets within integrated transport systems are often from the passenger before driving to validators to stamp. Occasionally, such tickets are also issued with a very short period of validity for immediate departure; they are already provided with a cancellation feature when they are purchased from the machine. On this advance cancellation, which is also used in trams, the passenger is i. To avoid unintentional cancellation. d. Usually indicated on the machine. 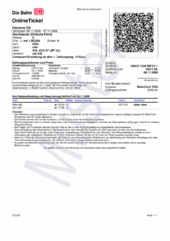 An online ticket from Deutsche Bahn

When purchasing an online ticket, the customer prints his ticket himself (see also print @ home ). In addition, at the time of purchase he must indicate which BahnCard , debit or credit card he wants to use for identification during the journey. This means that multiple people cannot travel with multiple printouts of the same ticket. The ticket can usually be canceled over the Internet ; Printing and direct debit do not yet prove the purchase. Only a pincer print of the train attendant proves that the ticket was used. In addition to plain text , the ticket typically contains several codes that the train conductor can use to check the validity of the ticket. These include, for example:

With one variant of the online ticket, the customer only receives a code that entitles him to travel.

The e-ticket is not a ticket in the strict sense of the word. Only the identity of the customer is registered when the ticket is sold. When starting the trip, the customer only has to prove his identity, e.g. B. using his credit card, and then receives the actual ticket or flight ticket.

A completely paperless version of the online ticket is the SMS ticket , which is sent to the passenger's mobile phone via a short message . Billing takes place either via the telephone bill or, after prior registration, via invoice. SMS tickets are mainly used in local public transport .

In the Estonian cities of Tallinn and Tartu it is possible to equip yourself with an identity card with a chip and the season ticket previously purchased on the Internet ; this is cheaper than the paper version. The advantage of this regulation is that if you lose a normal ticket you would have to buy a new one while it is valid . The old identity card will be marked as invalid by the passport authorities and you can continue to use the ticket with your newly issued document for the remaining period of validity. According to a similar principle, smart cards are used in local public transport in many cities (e.g. Oyster Card in London or " Octopus " in Hong Kong ). 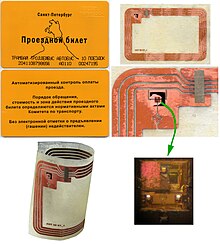 In the Soviet Union and in the early days of modern Russia, documents printed on paper were used as tickets. Such documents were only valid from the first to the last day of the month. Ordinary five- kopeck coins were used as single passes, which were later replaced by tokens due to constant inflation .

In the modern Russian Federation, prepaid tickets in the form of electronic plastic or contactless paper cards are gradually gaining acceptance.

Paper tickets with an RFID chip are used in the Moscow subway .

The first electronic plastic tickets had a magnetic strip and only had to be shown to the controller or bus driver when boarding the means of transport. In addition to the plastic card, you had to have a valid paper token for the current month; the two parts were only valid together. Such cards have not been used for some years; they have been replaced by tokens (only in the subway) and contactless cards.

Electronic tickets for a limited period of time offer a certain discount for each single journey. Resourceful youngsters used to turn it into a business by collecting tokens from travelers in front of the automatic locks and using the electronic ticket instead. As a consequence, all discounted tickets now have a ten-minute security period during which the ticket is blocked from being used again in the subway. Electronic tickets for non-discounted single trips do not have such a security period and can be read in again immediately.

Electronic contactless tickets in credit card format have so far only been limited with regard to the number of subway journeys. You can travel as often as you like with these cards during their validity period. The plastic cards are issued at the subway ticket offices for a deposit of 30 rubles. After the validity period has expired or after all individual trips have been used, this card can either be reloaded with a different or the same type of ticket or (if the deposit is refunded) returned at the cash desk. The card itself will automatically expire 90 days after the last recharge; in this case the deposit is lost.

In 2010, the first non-rechargeable electronic paper tickets came on the market, which are valid for a limited number of tram, trolleybus and bus trips. These cards are sold with a protective metal foil that must be removed prior to first use. In theory, these tickets have unlimited validity; in practice, however, they expire 30 days after a nationwide tariff change, which usually happens every one to two years.

In Switzerland today, tickets can be bought at ticket counters , ticket machines or as e-tickets .

The development was similar to that in Germany. Even if Edmondson's ticket could last longer. This was also due to direct traffic , since in Switzerland many more railway companies are involved in issuing uniform tickets.

In Switzerland, route travelcards are widespread, the same applies to the general travelcard and the half-fare travelcard . Since August 1, 2015, these have also been issued in the form of the SwissPass .

A price differentiation between, on the one hand, more expensive tickets for rush hour traffic (peak / anytime) and cheaper restricted tickets for excursion traffic (off-peak) has been common in Great Britain for a long time.

National Rail consistently uses credit card-sized tickets with a magnetic strip on the back, which are machine-readable, as there are usually ticket barriers at UK train stations . H. the platform can only be reached with a ticket.

The London transport companies (underground, etc.) use the same system as National Rail, and there is also a contactless readable card the size of a credit card, the Oyster Card , on which you can add credit or tickets (single or multi-day tickets, monthly tickets ...) . It is now also possible to use a normal contactless credit or debit card (American Express ExpressPay, Visa payWave, MasterCard PayPass) instead of an Oyster card.

Accessibility of the platform

In Germany, Austria and Switzerland, as in many other countries, the platform i. d. Usually accessible directly and without a ticket, whereas in Great Britain, for example, there are platform barriers and you need a platform ticket or a valid train ticket to enter the platform . The platforms of the Hamburg U- and S-Bahn (in the HVV) can also only be entered with a valid ticket or platform card.