The Simplon Line , also known as the Simplon Line , is a main railway line in Switzerland and Italy and serves as a feeder between the Lake Geneva region and Paris to the Simplon Tunnel . It is owned and operated by SBB (up to Iselle ) . The route runs from Vallorbe on the French border to Domodossola in Italy.

In 1855, the Cossonay - Bussigny-près-Lausanne section was opened by the OS as part of the construction of the Jura foot line. The Bussigny – Lausanne curve followed in 1856 . In 1870 operations began on the Cossonay – Vallorbe line . In 1875 the cross-border connection with the tunnel of the Col de Jougne was opened and thus the connection to the French rail network was established. The trains from France to Switzerland had to make a hairpin until 1915, before a direct route was possible with the Tunnel du Mont d'Or and the new line to Frasne . The SNCF initially kept the line to Pontarlier, but it suffered severe damage in the Second World War , including the blowing up of the Jougne tunnel, and was not rebuilt.

The first section of the line went into operation on June 10, 1857, when the Compagnie de l'Ouest Suisse opened the Villeneuve - Bex section . The route was completed by the OS, the Ligne d'Italie and the Simplonbahn in further stages up to the gap between Leuk and Brig in 1878. The continuous expansion to double track between Lausanne and Brig was completed in 2004.

In 1913 the construction of the Lötschberg mountain line was completed and Brig was expanded into the new hub station. After the Sion – Brig section was electrified with 3000 volts 16 Hertz three-phase current in 1919 , the line was electrified between 1923 and 1927 with the single-phase alternating current 15 kV 16 2/3 Hz that is common today for the SBB . The three-phase line was the last to be converted to alternating current.

With the opening of the Lötschberg base tunnel in 2007, Visp train station became the new transfer hub from the Bern region to Zermatt and towards Sion. Since then, all LBT trains have been using the Simplon line between Visp and Domodossola. 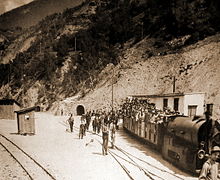 During the construction of the Simplon Tunnel

In 1906, after eight years of construction, the first tube of the Simplon Tunnel and the continuation of the route to Domodossola were opened. With what is probably the longest spiral tunnel in the world, Varzo elicoidale , the southern connection to Domodossola was established. The Simplon Tunnel was electrified with 3000 volts 16 Hertz three-phase current from the opening until 1930.
→ Main article: Three-phase operation Brig – Iselle

In 1930, the route from Brig to Domodossola was electrified continuously with the Swiss 15,000 volt 16 ⅔ Hertz power system , which, with its high voltage, is more suitable for the steep south ramp than the Italian 3000 volt direct voltage system . The service on the Iselle- Domodossola south ramp in Italy has been carried out by SBB in accordance with Swiss regulations since it opened . Until electrification in 1930, the 25 per thousand-steep section of the route was operated with steam, for which a large number of C 5/6 steam locomotives were stationed in the Brig depot , which found a suitable field of application on the Simplonsüdrampe after the electrification of the Gotthard Railway .

Since the end of the Trans-Europ-Express connections from Paris to Milan , only night-time passenger trains have been running the full route. These trains are operated by Trenitalia under the name Thello and operate on the Paris- Dijon- Milan- Venice route .

Long-distance TGV trains from Paris run between Vallorbe and Lausanne , which are seasonal to Brig . The route between Cossonay and Bussigny VD or Lausanne is still used by ICN trains that run on the Jura foot line. InterRegio trains run to and from Geneva Airport between Lausanne and Brig . EuroCity trains run between Lausanne and Domodossola and run from Geneva to Milan or Venice. With the opening of the Lötschberg base tunnel in 2007, InterCity trains Romanshorn –Brig and EuroCity Basel SBB –Milano Centrale use the section between the south portal in Visp and the Simplon tunnel north portal in Brig.

In the Rhone Valley , regional trains run from Brig to Monthey or Saint-Gingolph . In addition, most of the RéseauExpressVaudois lines run in sections on the Simplon line, the section between the Lausanne and Renens stations is used by five of the seven REV lines, as trains from / to Geneva also use the Simplon line. The S2 runs between Vallorbe and Lausanne, the S1 between Cossonay and Villeneuve, the S3 between Renens and Villeneuve, the S4 between Renens and Lausanne and the S11 between Cossonay and Lausanne. 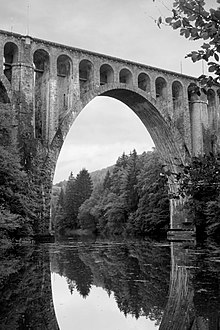 The route includes the area of the border station of Vallorbe to its northern extension, the RFF -distance from Dijon to. After crossing the Le Day viaduct , the station of the village of Le Day is reached. Immediately thereafter, the PBr branch line branches off to the right to Le Brassus . The Jura foot line from Olten joins the route between the La Sarraz and Cossonay stations . Together with this, Bussigny-près-Lausanne is reached, where a triangle of tracks enables the connection to the Lausanne-Geneva railway line . Thanks to this triangle, trains on the Jura foot line to Geneva are spared the turnaround at Lausanne station . The Vaudois capital Lausanne is reached via Renens .

At St. Saphorin on Lake Geneva

After the Lausanne train station, the line to Friborg – Bern branches off to the left in the middle of the SBB parking facilities , while the Simplon line remains on the shores of Lake Geneva. Some Lavaux municipalities have stops on both routes, such as Pully ( Pully and Pully Nord ) or Lutry ( Lutry and La Conversion ). About Pully, Lutry and Cully is the station of Vevey reached. Here, the Chemin de fer Vevey – Chexbres joins the Simplon line, a single-track connection to the railway line to Bern - which is also a bypass from Lausanne (but is rarely used as such). In addition, the narrow-gauge MVR route to Les Pléiades runs from here . Via La Tour-de-Peilz , Burier and Clarens , which is already part of Montreux , the Montreux train station - the only Swiss train station with three different gauges - is reached. Here the MVR line branches off to the Rochers de Naye and the Montreux-Berner-Oberland-Bahn to Lenk . After Montreux, the route leads past Chillon Castle and the former Hôtel Byron to Villeneuve . In Aigle, three narrow-gauge lines branch off to Leysin , Les Diablerets and Champéry . In Bex , the narrow-gauge railway line runs on the Col-de-Bretaye . In Saint-Maurice, the line from Saint-Gingolph joins the Simplon line. Then Martigny is reached, where two railway lines branch off again. Both are operated by TMR , a narrow-gauge to Chamonix and a standard-gauge to Orsières including a branch line to Le Châble . A few kilometers later Sion follows , shortly afterwards Sierre , before the language border between French and German is reached. The first stop in Upper Valais is Leuk . In Visp station there is a connection to the Matterhorn-Gotthard-Bahn (MGB) from Zermatt, and the Lötschberg base tunnel joins the line. The MGB runs from Brig , where the Lötschberg mountain route also joins the Simplon line, towards Upper Valais. 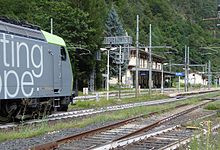 Although in Iselle the distance property of the SBB of the Italian State Railways switches (FS) until Domodossola with Swiss power system and after Swiss running regulations down. The inpatient staff, however, provide the FS. Locomotive Re 485 of the BLS passing through Iselle.

After Brig, the line disappears in the Simplon Tunnel , in the middle of which is the Swiss / Italian border . The tunnel is exited in Iselle di Trasquera , where, as in Brig, there are terminals for loading cars through the tunnel. This is followed by the 1.7 km long “Trasquera” tunnel and the 3.0 km long spiral tunnel “Varzo”. Domodossola is reached via the Varzo and Preglia stops . The 19 km long double-lane route between the southern portal of the Simplon Tunnel and Domodossola is operated with the Swiss electricity and security system in accordance with the Swiss driving and operating regulations. The section is supplied with 16.7 Hz traction current from Switzerland, but belongs to the Italian State Railways (FS), which also provide the stationary staff. Even in the 21st century with open network access , the majority of the Italian route section will be used by Swiss locomotives .

The transition to the Italian systems, combined with a possible change of locomotive and personnel, takes place in Domodossola Fascio Viaggatori for passenger and RoLa trains and Domodossola II for freight trains. From Domodossola, trains run via the continuation to Milan , which is owned by the Italian infrastructure company RFI .