Veytaux is a municipality in the Riviera-Pays-d'Enhaut district in the canton of Vaud in Switzerland .

Veytaux lies at 438  m above sea level. M. , 8 km southeast of the district capital Vevey (air line). The village extends on the debris cone that the Veraye torrent has accumulated over time at the western foot of the Rochers de Naye when it flows into Lake Geneva , in a promising location around 60 m above lake level on the Vaudois Riviera .

The area of ​​the 6.7 km² municipal area comprises a section on the east bank of Lake Geneva (around 1700 m of the lakeshore line) and the adjacent Vaud Alps . The western part of the municipality is bounded in the north by the Veraye stream , in the south by the rugged Les Dentaux mountain ridge (up to 1714  m above sea level ) and includes the steep, densely forested southern flank of the Veraye valley. The only slightly less sloping surface is the rubble cone of the veraye. To the east, the municipality extends to the summit of the Rochers de Naye, on which 2042  m above sea level. M. the highest point of Veytaux is reached. The narrow Naye valley east of this summit between two mountain ridges sloping down to the Hongrin valley also still belongs to Veytaux. The eastern border runs in the area of ​​the yard prices au Maidzo along the Hongrin , a side stream of the Saane . In 1997, 6% of the municipal area was in settlements, 73% in forests and woodlands, 14% in agriculture and a little less than 7% was unproductive land.

Veytaux includes Chillon Castle on a limestone rock in Lake Geneva, the hamlet of Grandchamp on the border with Villeneuve, the mountain settlement of Sonchaux ( 1258  m above sea level ) on the western slope of the Dentaux and a few individual farms. Neighboring municipalities of Veytaux are Montreux , Rossinière and Villeneuve in the canton of Vaud and Haut-Intyamon in the canton of Friborg .

With 880 inhabitants (as of December 31, 2018), Veytaux is one of the smaller municipalities in the canton of Vaud. 82.4% of the residents are French-speaking, 7.3% German-speaking and 2.9% English-speaking (as of 2000). The population of Veytaux was 287 in 1860 and 625 in 1900. After that, the population continued to increase to 910 people until 1970. Due to the recession, there was an emigration of more than 100 people in the 1970s. Since then, the population has fluctuated around 800 people. The settlement area of ​​Veytaux has now seamlessly merged with that of the Territet district of Montreux.

Until the end of the 19th century, Veytaux was a predominantly agricultural village. After that, it gradually came under the influence of the tourist development of Montreux. A lime and cement plant was in operation at Grandchamp until 1920.

Today agriculture with some viticulture along the lake shore, as well as dairy farming and cattle breeding on the heights, have only a minor role in the income structure of the population. Additional jobs are available in local small businesses and especially in the service sector (catering industry). The Veytaux underground power station of the Forces Motrices Hongrin-Léman is located near Grandchamp . In the last few decades the village has developed into a residential community thanks to its attractive location. A large number of those in employment are commuters who work in the Vevey-Montreux region, sometimes also in Lausanne .

Veytaux is very well developed in terms of traffic. It is located on the main road 9 , which leads from Lausanne along the lakeshore via Montreux into the Valais . The nearest motorway connections to the A9 (Lausanne-Sion), which opened in 1970 and crosses the municipality, are at Montreux (in the north) and at Villeneuve (in the south), each around 5 km from the town center.

On April 2, 1861, the Lausanne-Villeneuve section of the railway line from Lausanne to Sion was opened. The Veytaux-Chillon train station is located in the municipality. The Rochers de Naye have been accessible to tourism by a rack railway from Glion via Caux since 1892 .

From 1888 the tramway Vevey – Montreux – Chillon , an electric tram , ran through Veytaux . It was the first electrically operated railway in Switzerland, was extended to Villeneuve in 1903 and replaced by the Vevey – Villeneuve trolleybus in 1957 . This is now operated by the transport company Transports publics Vevey-Montreux-Chillon-Villeneuve (VMCV). At the turn of the century, Veytaux was also the starting point for the first Swiss trolleybus line; from 1900 this test route led from Chillion to the former Hôtel Byron in neighboring Villeneuve. 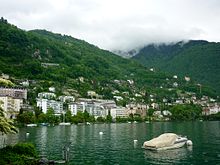 Veytaux is located on Lake Geneva

The first written mention of the place was in 1332 under the name Veytour with the meaning of old tower from the old French word vey (old). The Veytaux area was owned by the Bishop of Sion in the Middle Ages . While Chillon passed to the Counts of Savoy as early as 1150, Veytaux initially remained with the diocese of Sion and belonged to the victoy of Montreux. In 1295 the entire bishopric was bought by Girard von Oron. His successor, Girard II of Oron, had to sell the southern part of this property with Veytaux to the Savoy family due to financial difficulties in 1317. Until the beginning of the 16th century, Veytaux and the hamlet of Chillon formed two independent villages. Only after 1560, after the decline of the Burgfleckens and the residents moved to Veytaux, did the village gain in importance.

With the conquest of Vaud by Bern in 1536, Veytaux came under the administration of the Bailiwick of Vevey . After the collapse of the Ancien Régime , the village belonged to the canton of Léman from 1798 to 1803 during the Helvetic Republic , which then became part of the canton of Vaud when the mediation constitution came into force . In 1798 it was assigned to the Vevey district. Because the village population refused to merge with Montreux-Châtelard and Montreux-Planches in 1961, Veytaux remained a politically independent municipality.

Since 2012, the altitude of the municipality has been part of the Parc naturel régional Gruyère Pays-d'Enhaut .

The reformed village church has stained glass windows designed by B. Viglino. On the slope above Veytaux and Chillon, the prestressed concrete structure of the Viaduc de Chillon motorway bridge with spans of a maximum of 104 m can be seen from afar. Veytaux is home to the famous Chillon Castle and the neighboring artillery factory Chillon from the Second World War .