Corsier-sur-Vevey is a municipality in the district of Riviera-Pays-d'Enhaut in the canton of Vaud in Switzerland . Until the end of 1952 the village was officially called Corsier (VD) , after which it took its current name to make it easier to distinguish it from the Geneva municipality of Corsier .

Corsier-sur-Vevey is 420  m above sea level. M. , 1 km north of the district capital Vevey (air line). The village extends slightly elevated on a terrace north of the alluvial cone raised by the Veveyse at its confluence with Lake Geneva , at the southern foot of Mont Pèlerin , in the extreme southeast of Lavaux .

The area of ​​the 6.7 km² municipal area includes a section near the north-eastern shore of Lake Geneva. The communal soil extends from the alluvial cone of the Veveyse in a narrow strip to the northeast to below Châtel-Saint-Denis and includes the right (northwest) valley flank of the Veveyse. The creek cut deep into a valley forms the border. On the southern slope of the pre-alpine mountain Mont Vuarat is 950  m above sea level. M. reached the highest point of Corsier-sur-Vevey. In 1997, 19% of the municipal area was in settlements, 32% in forests and woodland, 48% in agriculture and a little more than 1% was unproductive land.

Corsier-sur-Vevey includes the industrial settlement Fenil ( 545  m above sea level ) on a ledge above the Veveyse, the scattered settlement Monts de Corsier ( 760  m above sea level ) on the southeast slope of Mont Vuarat and numerous individual farms. The neighboring municipalities of Corsier-sur-Vevey are Saint-Légier-La Chiésaz , Vevey , Corseaux , Chardonne and Jongny in the canton of Vaud and Attalens , Remaufens and Châtel-Saint-Denis in the canton of Friborg .

Corsier-sur-Vevey was a predominantly agricultural village until the end of the 19th century . After that, the development into a residential, industrial and tourist community began.

Even today, viticulture (around 20 hectares) on the optimally sunny slopes of Lavaux above the village has a certain role in the income structure of the population. The quality wines produced here go under the Chardonne appellation. In the higher elevations, arable farming , dairy farming and cattle breeding are practiced .

Further jobs are available in trade and especially in the service sector. In addition to everyday goods, the Chardonne trade is also geared towards tourism. In recent decades, with the creation of the Fenil Industrial and Commercial Zone, numerous companies have settled in the village. In Corsier-sur-Vevey there are companies in the construction and transport industry, precision mechanics and the tobacco industry, the Serono Biotech Center and wine shops. Above the village is the Nant psychiatric clinic. Corsier-sur-Vevey has gradually developed into a residential community. A large number of those in employment are commuters who work in the Vevey-Montreux region, sometimes also in Lausanne .

The community has good transport connections. It is located a little above the main road from Lausanne along the lakeshore to Vevey , from which the main road 12 branches off to Châtel-Saint-Denis . The next motorway connection to the A9 (Lausanne-Sion), which opened in 1970 and crosses the municipality, is around 2 km from the town center. Corsier-sur-Vevey is connected by a bus to Vevey train station, which is just outside the municipality.

In the area of ​​Corsier-sur-Vevey, graves dating from late antiquity to the early Middle Ages have been discovered. The place was first mentioned in a document in 1079 under the name Corsie . Later the names Corsiey (1147), Corsiacum (1179), Corgie (1180) and Corsiez (1453) appeared. The place name is derived from the Roman surname Curtius .

Corsier-sur-Vevey was subordinate to the Bishop of Lausanne from its first mention, but came as a fief to the von Blonay family at the end of the 11th century. This gave part of the fief in 1284 to the lords of Oron . With the conquest of Vaud by Bern in 1536, Corsier-sur-Vevey came under the administration of the Bailiwick of Lausanne . After the collapse of the Ancien Régime , the village belonged to the canton of Léman from 1798 to 1803 during the Helvetic Republic , which then became part of the canton of Vaud when the mediation constitution came into force . In 1798 it was assigned to the Vevey district.

Since the Middle Ages, Corsier formed a large parish, which also included Chardonne, Corseaux and Jongny. These villages only became politically independent parishes with the dissolution of the large parish in 1816. Another significant change in the border was made in 1892 when the Arabie, Plan-Dessus, Plan-Dessus, Sous-Crêts, Corsets and Faubourg-Saint-Antoine quarters on the outskirts of Vevey on the alluvial cone of the Veveyse were separated from Corsier-sur-Vevey and after Vevey were incorporated. 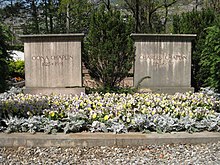 Grave of Charlie Chaplin and his wife Oona

A parish church has been mentioned since 1079. The tower of the previous Romanesque building and parts of the choir with wall paintings from the 15th century are integrated into today's church . The three-aisled nave and its side chapels date from around 1600. The rectory built in 1592 was redesigned in the 18th century.

Other important buildings include the Maison laïque (with sculptures in the Renaissance style ), the Bernese Winzerhaus (1583–1585), the Maison Cuénod and the Maison De Montet (both from the 18th century), the Hôtel de Ville (17th century) and the Châtelard Castle (from the 17th and 18th centuries).

The Manoir de Ban mansion, built in 1840, was the residence of Charlie Chaplin from 1953 to 1977 , who - like James Mason and Bronisław Huberman  - is buried in the Corsier-sur-Vevey cemetery. In 2016, a museum, Chaplin's World , opened in the mansion .